Romania Insider has started a new newsletter, the Capital Markets monthly newsletter, put together by editor in chief Andrei Chirileasa, who has 16 years of experience in monitoring and reporting about Romanian capital markets.

Below you will find the full content of this October 2020 newsletter, published on our website with the support of our sponsor Bitcoin Romania. The Capital Markets newsletter is sent to Ultra members of Romania Insider - check options to receive this newsletter here.

We are Emerging! But where is the growth?

The big news of the last month was Romania’s upgrade to Emerging Market status by FTSE Russel, one of the major international providers of stock indices. Following this promotion, the first Romanian companies – Banca Transilvania (TLV) and Nuclearelectrica (SNN) - were introduced in FTSE Russell indices followed by investors in emerging markets. A historic moment, as Government and BVB representatives called it, putting Romania “one click away from billions waiting to be invested.”

Realistically, this is one small step in the development of the local capital market, which still needs to convince more local companies to get listed in order to grow. Meanwhile, Romania still needs to gain the foreign investors’ trust by pursuing coherent fiscal policies. For the moment, Romania is getting closer to have its rating downgraded to junk by the major international rating agencies because of the 40% pension hike voted by the Parliament just before the local elections on September 27 - expected to get the budget deficit off track in the next years. Such a decision would increase the financing costs for the Romanian state and local companies, with negative consequences on the local economy and the capital market.

Thus, instead of a positive evolution of the BET due to Romania’s promotion to Emerging Market, the Bucharest Stock Exchange saw a correction due to the Parliament’s decision on increasing pensions. The BET is down 4.3% in the last month and investors remain cautious.

The most important milestones in Q4 are the decisions of the three international rating agencies on Romania’s rating: Moody’s on October 23, Fitch on October 30, and S&P in December. Then, there are the general elections that will take place on December 6, if the Parliament doesn’t postpone them due to the pandemic. On the macro front, the National Statistics Institute (INS) will release the first Q3 GDP data on November 13. 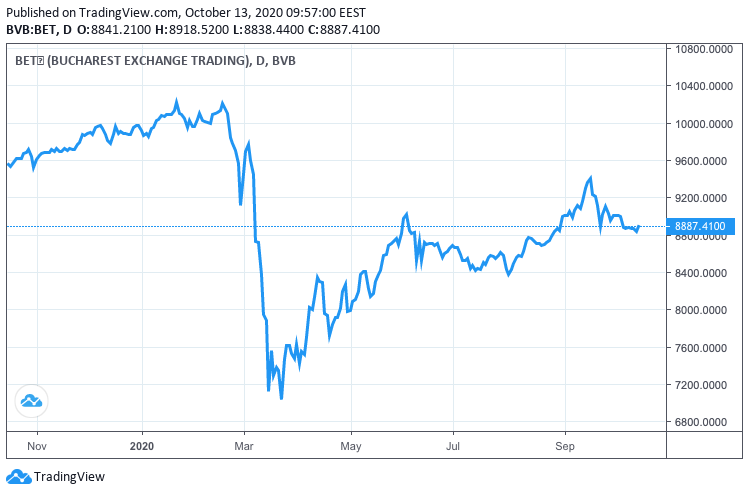 Banca Transilvania (TLV), the biggest lender in Romania by assets, was again the most traded company on the Bucharest Stock Exchange in the last month. The large transactions came as the bank’s shares were included in FTSE Russell’s emerging markets indices. However, the high turnover wasn’t accompanied by a growth in the share price. On the contrary, the price went down 10% in the last month, one of the most significant corrections on the Bucharest Stock Exchange.

The shares of oil and gas group OMV Petrom (SNP) also went down by almost 12% in the last month, as the company reported lower operating results amid adverse market conditions. Fondul Proprietatea’s sale of a 3% stake in OMV Petrom through a private placement also put pressure on the share price.

Several large deals were also recorded with other blue-chip companies as the Paval brothers, who are among the biggest investors on the local capital market, transferred some stakes between the companies they control.

Building materials producer Teraplast Bistrita (TRP) recorded the highest growth in the last month (of the more liquid shares at the BVB) – 8.9%. The company’s shares were also included in a FTSE Russell index dedicated to small-cap companies. Moreover, Teraplast announced new investments, that will be partly financed with state grants. Medical services provider Medlife (M) also recorded a 4.6% increase in the last month. 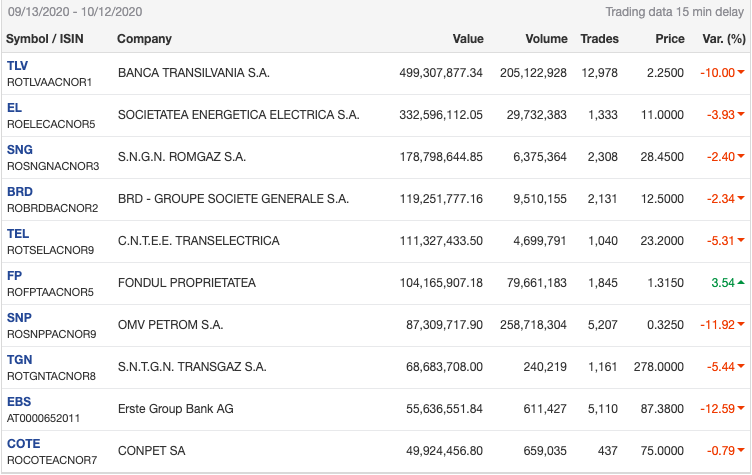 (P) Why Microstrategy and Square, two american companies, invested $475 millions into Bitcoin? Moving the company treasury money into Bitcoin is the new trend

“This investment reflects our belief that Bitcoin, as the world’s most widely-adopted cryptocurrency, is a dependable store of value and an attractive investment asset with more long-term appreciation potential than holding cash,” said Saylor in an August press release announcing the initial purchase of $250 million worth of BTC.

Political decisions that shake the markets

A historic moment: Romania officially enters the emerging markets league on Monday
Romania becomes emerging market – Fin. min: We are one click away from billions looking to be invested
Transactions on Bucharest Stock Exchange triple amid FTSE Russel’s upgrade

This premium newsletter was made available to all our website readers thanks to the support of Bitcoin Romania.