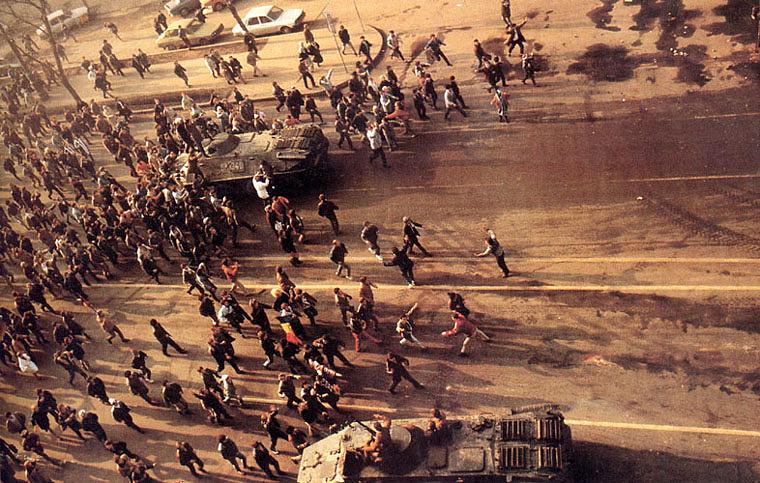 The Romanian prosecutors are investigating two military members and a former news anchor for acts that contributed to the diversion created during the days of the 1989 Revolution.

Last year, the prosecutors said they found that there was no power void in Romania during the days of the 1989 Revolution and that a military and political structure took control immediately after dictator Nicolae Ceaușescu and his wife fled Bucharest on December 22. A massive diversion and contradictory orders have led to numerous deaths in the days that followed Ceausescu’s fall, the prosecutors concluded.

The prosecutors have starting investigating Teodor Brateş, an anchor of the public television TVR during the 1989 Revolution, for crimes against humanity. According to the prosecutors, he was “the main factor for the dissemination of false news, of a diversionary character, thus contributing to a large extent to the settling in of the terrorist psychosis that deeply affected the entire population of Romania (military and civilian).”

Brateş is investigated for acts committed in between December 22 and December 31, 1989. At the time, he was the deputy editor in chief of the TVR’s Current Affairs newsroom. The messages he transmitted on air referred to terrorist attacks on military and civilian targets, poisoned water, mined buildings, various abominable conducts of the so-called terrorists, helicopter attacks, or columns of armored vehicles on the move.

“Repeating this kind of misinformation made the terrorist psychosis reach paroxysmal highs and this became the main cause of the numerous losses of human life, injuries and destruction that occurred during the revolutionary events,” the prosecutors say.

A day before the indictment of Brateş, the military prosecutors from the General Prosecutor’s Office decided to continue the investigation for crimes against humanity in the case of two military, namely retired lieutenant general Iosif Rus, at the time of the 1989 Revolution a commander of the Military Aviation and a member of the country’s Superior Military Council, and of retired admiral Emil (Cico) Dumitrescu, then a first degree captain.

In the case of Rus, the prosecutors say he issued orders with a diversionary character. During the evening of December 22, 1989, out of his own initiative and without any right, he insisted for the issuance of an order asking that a sub-unit of the Security troops go help the garrison of the Otopeni International Airport. He had no right to interfere with the security and defense of the airport, and the order he gave led, through the miscommunication it produced, to the death of 48 people and the injury of 15 during the morning of December 23, 1989, the prosecutors say. This happened in a fire exchange between the military forces of the Defense Ministry and those of the Security troops that came in defense.

Furthermore, there is evidence that Rus ordered on December 23 to have the tricolor badges of the helicopters of the Boteni 61 Regiment repainted. These were replaced with other badges, of a different geometrical format. The helicopters were sent on various missions across the capital, in the area of the public television or of the Ghencea cemetery, to fight the alleged terrorists. This created confusion and suspicion among the military on the ground, leading to the opening of fire and an intensification of the terrorist psychosis, according to the prosecutors. At the same time, the statements regarding the existence of terrorist elements proved false, the prosecutors noted.

About Emil (Cico) Dumitrescu, the prosecutors say he launched through TVR false information, of a diversionary character, which led to “the psychosis of the terrorist phenomenon at the level of the entire country.” The loss of numerous lives and injuries were consequences of this. During the days of the revolution, Dumitrescu was part of the military command post at TVR.

Former president Ion Iliescu is also investigated for crimes against humanity, after president Klaus Iohannis green-lighted his prosecution, alongside that of former prime minister Petre Roman and former deputy prime minister Gelu Voican Voiculescu. The prosecutors say Iliescu accepted and made official several military measures, some of which had “a clear diversionary character.” They also say he could have intervened to stop the diversionary phenomena but did not.

More than 1,100 people were killed and over 3,300 were injured during the December 1989 events in Bucharest, Timisoara, and other Romanian cities. Most people lost their lives or were injured in the armed confrontations that followed after Ceausescu fled Bucharest.

Romanian president: Too long wait for the 1989 Revolution truth