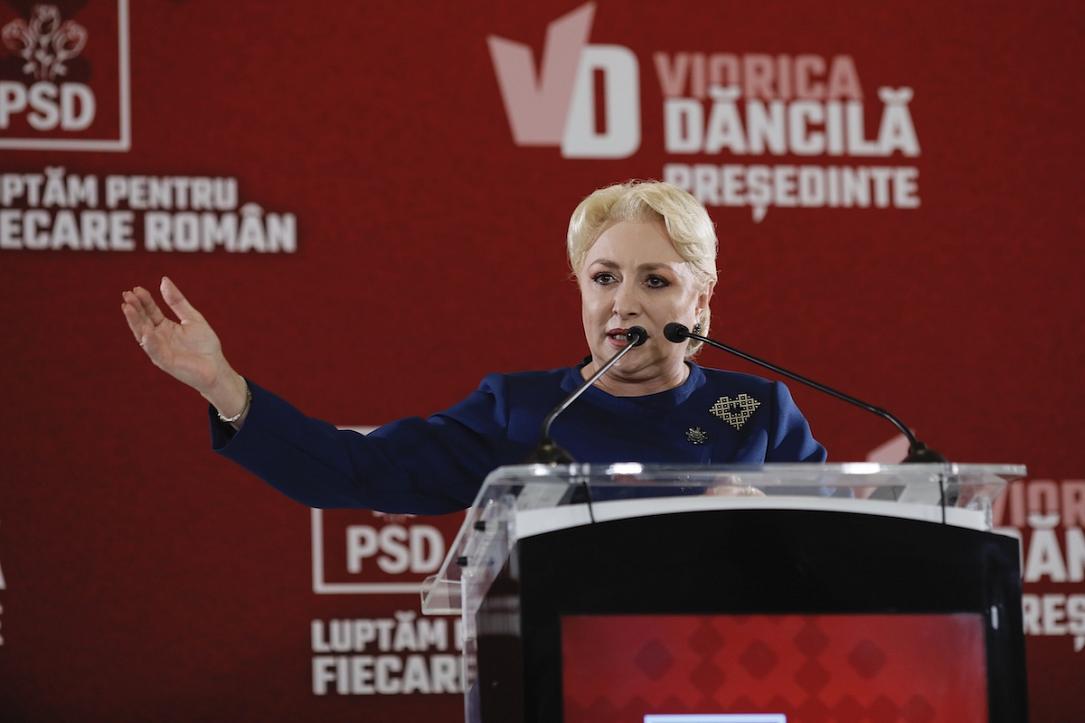 Former prime minister and presidential candidate Viorica Dancila said on Tuesday evening that she will be Romania’s president starting Monday and that she hopes the incumbent president and counter-candidate Klaus Iohannis will vote for her too.

She made these statements during a press conference organized at the Parliament on Tuesday evening. Dancila’s dialogue with the journalists started at 18:00 and lasted for about two and a half hours, overlapping at some point with the debate of Klaus Iohannis, which started at 19:00. The two have been addressing to the electorate separately in this campaign, as Iohannis refused a political debate with Dancila. (See the main statement made by Klaus Iohannis during his debate here).

Viorica Dancila listed her achievements at the beginning of the press conference, as well as the achievements of the Social Democratic Party (PSD) and its government, comparing them with president Klaus Iohannis’ work during his five-year mandate as president. In short, she said that Iohannis did very little in the last five years and named him “a coward” for refusing a debate with her, local Stirileprotv.ro reported.

Without anyone to confront her on the facts and figures, Dancila stated that her party accomplished 80% of the governing program. However, this is an overstatement, as this analysis by factual.ro shows.

Referring to Romania’s foreign policy, Dancila said: “I saw that president Klaus Iohannis returned from the US with a hat and three photos. I’ve had 40 external visits and 100 receptions in Bucharest and I’ve tried to bring something concrete for Romania from each visit, with contracts or investors from other states. It’s not acceptable for the president of Romania to have only 25 external visits in five years.”

As for what the PSD government did in the country, Viorica Dancila talked about the high economic growth, the economic measures, and the wage increases. “The doctors’ salaries have tripled and thus the exodus to other countries was stopped, the teachers' salaries increased by 80%, and the public salaries by 50%. […] Throughout this period, the president of Romania did nothing else but misinform, he opposed the wage increases. With cynicism, he told pensioners that there are no funds to raise pensions.”

When asked to say what she would do if she’s not elected president, Dancila replied: “On Monday I will be the president of Romania.” Later during the press conference, answering another question, she said: “I hope that Klaus Iohannis will vote for Viorica Dancila.”

As for what would be the first thing she would do as president, the former prime minister said that she would call for a referendum on giving up the president’s immunity, something that Klaus Iohannis “promised and failed to do.”

She also said that she was not responsible for her party's “assault on justice,” and that politics and justice should be kept separate. “Justice must be done by the magistrates.” When confronted about her party's initiatives to change the criminal codes and issue an emergency ordinance on amnesty and pardoning (OUG 13), in early 2017, Dancila said she was a member of the Europea Parliament at that time and she was not involved in this. "Was I the PM to take responsibility for OUG 13? Was I justice minister? Don't try to pin OUG 13 on me, I didn't issue it," she said.

As Viorica Dancila avoided using the English language during her mandate as prime minister of Romania, a journalist decided to ask her a question in English during the press conference but the former PM responded in Romanian, explaining that there were many Romanians watching the conference and she “would not want to ridicule this open debate.”

“I'll give you an example. Angela Merkel speaks in German during visits, meetings with the presidents or heads of government of other states. Let’s not try to ridicule a serious debate. Let's look at the good things we can take from the approach of each head of state and government. I believe that, in Romania, we should be proud of our language. I could have given you an answer in English, believe me. And you will see that I also answer in English,” Dancila explained.

You may also want to read: Dismissed PM Dancila explains her poor English: Those who speak foreign languages care less about Romania

A question about math also put Viorica Dancila in difficulty, although she mentioned during the conference that she gave private Maths lessons in the past, local Digi24 reported. Asked to say the formula for calculating the area of a circle, the former PM said: “The radius squared.” (“Area of the circle” becomes most searched phrase on Google Romania after presidential “debate”)

The journalists also asked Dancila about her son being employed by the Court of Auditors in early 2018 almost at the same time she took over as prime minister. The former PM said that her son was hired before her appointment and that she wasn't involved. "Let's stop permanently linking children's activity to their parents. This is not always valid. My son has been very, very attacked lately. He was also to blame for being adopted. It was all his fault. Probably if I had left him in an orphanage he wouldn't have all these attacks on him," Dancila said.

"Viorica Dăncilă, the president of Romania, will consider all young people in this country as her own children," she added.

Romania will organize the second round of the presidential elections on Sunday, November 24, with the Romanians living abroad having three days to vote (Friday, Saturday and Sunday). The two candidates are incumbent president Klaus Iohannis, supported by the National Liberal Party (PNL), and Viorica Dancila, supported by PSD.