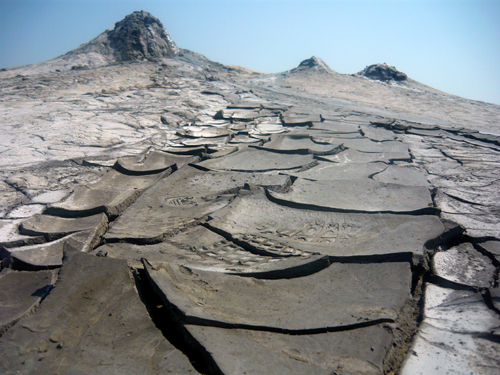 The Muddy Volcanoes in Buzau county are not the volcanoes you would expect. They're not the big, real volcanoes that scare off people and clog the European airspace with volcanic ash. Not by far. But they're a pretty amazing place, hidden somewhere in the Buzau mountains.

The Muddy Volcanoes were formed from the gas which comes from 30,000 meters underground. The gas goes through a clay sector, then through the underground water. So the gas pushes the water and the clay to the surface (which by that time become mud), creating small cones which resemble the shape of a volcano. 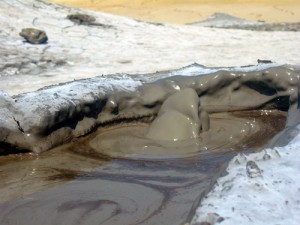 There are around 1,100 such muddy volcanoes in the world, and very few of them in Europe. The ones in Buzau are one of these, and actually not the only ones in Romania, but among the biggest in the country. You could find smaller scale ones in Moldova and Transylvania.

There are similar muddy formations in Azerbaijan. Most of the ones in Europe are underneath the sea - in the North Sea, Caspian and Barents Seas. Outside Europe, similar phenomena can be seen in Siberia, Australia, and the Trinidad Island in the Carribeans. Which makes the Muddy Volcanoes in Buzau pretty unique.  These so-called volcanoes are active all the time, which means gas is pushing mud to the surface in a continuous way, but at low speeds. The coming out of mud is usually signaled through a certain sound before the mud bubble bursts. There have been recent mud volcanoes 'eruptions'. In 2006, in Indonesia, 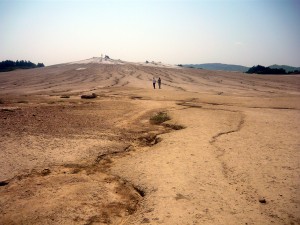 during several months, such a volcano sent out 125,000 cubical feet of mud a day.

The Muddy Volcanoes area in Buzau is however a natural reservation. It is located near Berca and Scortoasa localities in Buzau county. To get there from Bucharest, take the E85 road to Buzau (one hour and 20 minutes from Bucharest; take the Bucharest exit from Obor marker, then through 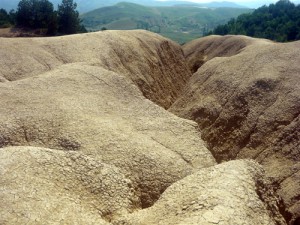 Voluntari and Afumati). When you reach Buzau, bypass the city and then take the road to Brasov. 20 kilometers down that road, turn right in Satuc village to Berca, crossing the Buzau river. Tturn left and again right after only after a couple of metres following a panel towards Chiliile. Drive 10 more km and take right from there until the next crossroad, where you will see a billboard pointing to Vulcanii Noroiosi (The Muddy Volcanoes). Take the turn right where the board shows 5,5 kilometers to muddy volcanoes. In that area there are two groups of such muddy formations - the Large and the Small Glooms (Paclele Mari and Paclele Mici). There's another similar one in Beciu locality.

The entire area lays over several hectares of gray,dray and rifty land, with little plants and herbs. It's almost the size of a football court and it pretty much resembles a lunar area. Large crevasses have been created in time by the water. 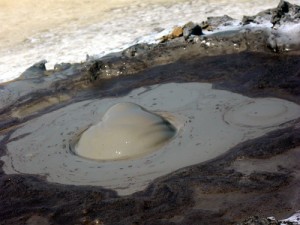 Mud volcanoes were first noticed at Berca by French H. Cognand, who was searching for oil in the area in 1867. Torrential rains, extensive deforestation, landslides give the entire area a lunar appearance.

Don't expect very well developed tourist facilities. Just go there to see the area, take some pictures, enjoy the wilderness. There's a small entry fee - RON 4 for adults and RON 2 for kids. If you want to take pictures for special events - weddings, or shoot a video there (several Romanian artists have done so), the fee is RON 900. There's even a guest house there, if you want to stay the night. 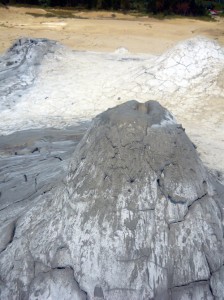 Any sort of camera you will take with you, it will take great looking pictures. Actually, the area is one of the most photographed zones in Romania.

Pictures by Corina Saceanu; copyrighted material - please do not republish.