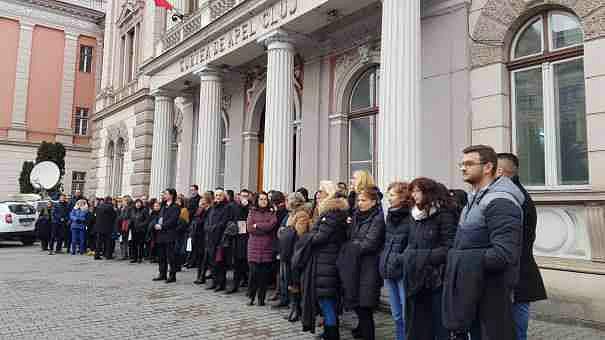 About 1,000 prosecutors and judges in Bucharest and other cities in Romania protested on Monday, December 18, against the changes to the criminal codes and justice laws, currently under discussion in the Parliament.

The new laws of justice entered on Monday an accelerated debate and vote procedure in the Senate. The Chamber of Deputies approved them last week.

The Romanian Constitution does not allow magistrates to enter a strike but they can use certain forms of protest.

The judges and prosecutors stood in silence in front of courts, dressed in robes, to show disapproval of the changes that could lead to the blocking of legal investigations or the canceling of results from already existing cases.

The protest was announced on Facebook by judge Cristi Dănileţ, a member of the Superior Magistracy Council between January 2011 and January 2017, and now a judge with the Cluj Court.

“The Romanian magistrates will not accept with indifference that the Parliament debates laws passed in favor of criminals. What is going on is a disgrace. The laws should not be made for certain people,” he wrote.

At the same time, the Association of Romanian Prosecutors (APR) drafted a brochure showing the wider and specific effects of the planned changes to the criminal codes. The brochure was written taken into account the proposed changes, as they have been communicated to the association, applied to cases inspired from their activity.

One potential example included in the brochure is that of a father filming his child playing in the park and also capturing a men assaulting a woman and forcing her into a car. He then goes with the recording to the Police. However, this cannot be used under the proposed legislation, since it stipulates that recordings can be used as evidence when they refer to the communication activities involving the party in a case but not those witnessed. Under the current legislation, any other recordings can constitute evidence if they are not forbidden by law.

The document is available in Romanian on the APR Facebook page.

The proposed changes to the justice laws have been criticized for placing prosecutors under political control and for blocking the activity of the National Anticorruption Directorate (DNA), among others.

Earlier this December the Judges’ Forum and the APR asked the Parliament to reject the legislative package amending the justice laws.