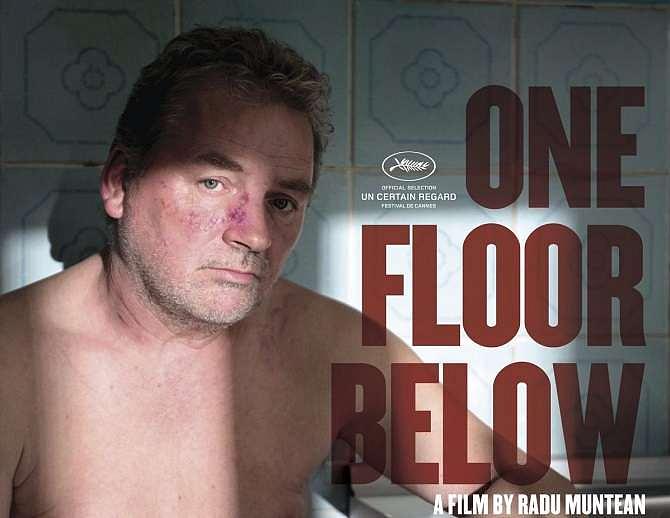 Radu Muntean is a filmmaker of great precision and his latest film is a masterclass in faultless, highly precise filmmaking. The most exciting release of the year after Aferim! and (although some might disagree) The Treasure, Un etaj mai jos/One Floor Below is currently running in cinemas across the country and you should watch it.

The plot is simple: a fairly happy family man and (equally fairly) successful business owner, likeable Pătrașcu hears an argument in his apartment building and shortly after, one of the arguing couple, a young woman, is found dead. When the police come to interrogate the tenants, he doesn't mention the argument and keeps baulking it throughout the movie. Things take an unsettling turn when the young man who had argued with the victim, the creepy downstairs neighbour, keeps showing up at Pătrașcu's door asking for help with his car registration and, more alarmingly, entering his family life, fixing his teenage son's computer and chatting with his wife. Not a word is spoken about the argument or what each man knows about the other. When the showdown happens, it's sudden, short, and violent.

But while the story may seem simple, its implications are anything but. The film's greatest achievement is saying so much about Romanian contemporary society and its focus on individual interest. To make so many sharp comments on what it means to be part of an estranged community in a world obsessed with individual success – not to mention dragging old, communism-born, habits into the mix, like the deep-rooted distrust of authority – is a wonder, since all this is expressed mostly by small gestures and talks about the most mundane of things: walking dogs, eating dinner, talking about everyday chores, scrolling through Facebook profiles. Then steady, all-encompassing camera and the long shots are just as important in painting this complex, razor-sharp portrait of a society in which humanity, responsibility and a sense of community are lacking. If this sounds like a drab fest, it is not, which is even more laudable. There is great humour in One Floor Below. Granted, neither laugh-out-loud nor heart-warming, but great, nasty humour indeed.

Obviously, I can find no missteps in this impeccably written, acted, and shot film but I have to admit I would have enjoyed it more on a purely entertainment level if it had more emotional moments and cinematic drive. A thriller without many thrills, or such subtle ones, is a hard thing to pull off. Still, this choice is true to its subject matter and approach and despite its  slow-burning, cerebral manner, One Floor Below is consistently engaging from start to finish and will keep you thinking for some time after you've left the theatre.

To end on the prescriptive note in the beginning: watch One Floor Below. Such piercing intelligence is rare on Romanian screens.