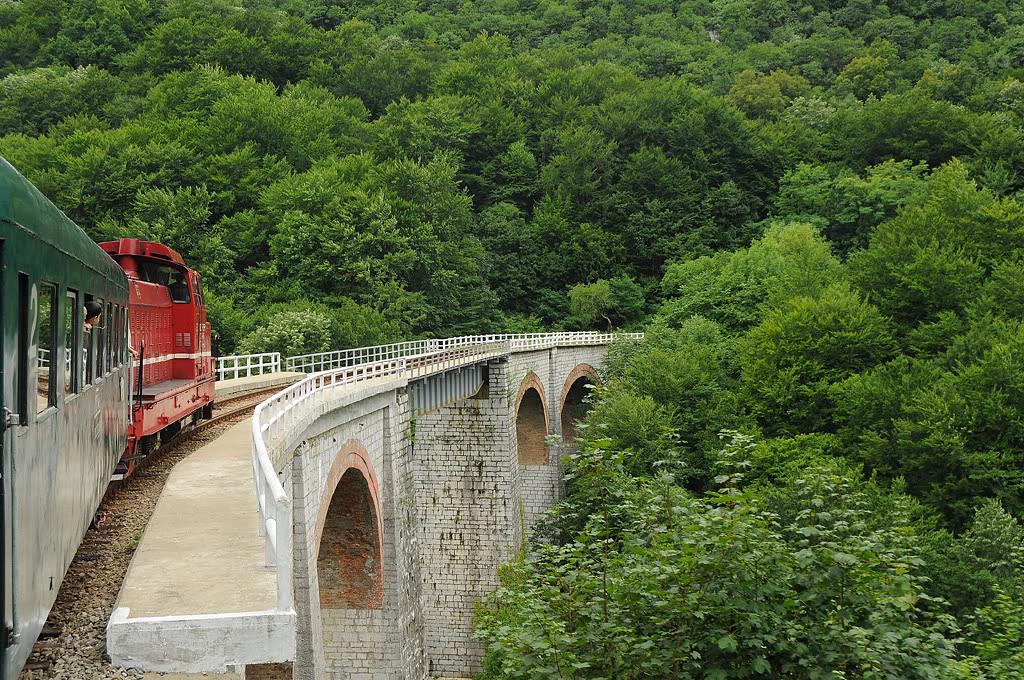 Train travel can be a great opportunity to discover beautiful areas of the country, especially when not pressured by time. We have put together below several suggestions of train itineraries, covering historic routes and beautiful sites.

In the region of Banat, the rail route linking the industrial, mining towns of Oravița and Anina was the first mountain railway to function in modern Romania. It opened in 1863 and it is still open to tourists. The route goes through 14 tunnels and crosses 10 viaducts, with plenty of opportunities for picturesque views. The highest viaduct of is the Jitin viaduct, at 37 meters, while the longest tunnel is Gârlişte, at 660 meters. The railroad is also known as The Semmering of Banat, because of the similarities with the Austrian railway Semmering, built between mid-19th century. The train running on this route has today an electro-diesel locomotive. More about this historical train route here.

The train trip linking these two southeastern Romania cities is a great opportunity to see the bank of the river Danube. Orșova is located some 22 km east of the Iron Gates, a spectacular gorge on the Danube, part of a nature park of stunning views. Reaching Drobeta Turnu Severin, you can explore a settlement with a history going back to the time of Roman emperor Trajan. Among the town’s attractions are the ruins of Trajan’s bridge, the Severin Medieval Fortress, and Water Tower. More about visiting Drobeta Turnu Severin here.

This route goes also through the region of Banat, one part of the country that is always worth exploring,  and links two cities with plenty of historical sites to visit, although not all of them refurbished. Known for it multicultural heritage and Secession-style architecture, Timișoara will be a European Capital of Culture in 2021. Stops on the route are made in Lugoj, once a fortified city on Timiș river, and Caransebeș, an important railway network point and a place filled with 18th and 19th century architectural buildings. Among the city’s landmarks is the building of the City Hall, modeled after the Vienna City Hall. At the end of the ride, passengers arrive at the Băile Herculane train station, one of the most beautiful in the country and one of the many patrimony buildings of the thermal spa resort that traces its history back to Roman times. The Baroque-style edifice of the train station, impressive both on the inside and the outside, was built between 1878 and 1886 on the plans of architect A.D. Serres. The state-owned railway operator CFR announced last year plans to refurbish it, Expressdebanat.ro reported. It would be one of the several historical buildings in the resort that need rehabilitation, among them the Neptune Baths, about which you can read more here. The Timișoara – Băile Herculane is served by both CFR and private operator Astra Transcarpatic.

The railroad linking Bumbeşti Jiu to Livezeni is one of the most spectacular in the country as it crosses the Defileul Jiului National Park. The plans for the construction on the rail link emerged at the end of the 19th century but it was finished only after the Second World War. The route covers tens of bridges, viaducts, tunnels and many support walls along the way. Valea Sadului is one stop along the way where visitors can disembark to enter the park, a place of wild nature sites and also a favorite spot of rafting fans.

This route covers the beautiful Vaser Valley, in the northern Romania region of Maramureş. This train ride is special because it is done by the steam-train known locally as mocăniţa, which used to run on a narrow gauge in the mountain regions of the country. The route comes with beautiful views of less trodden paths and those who want to spend more time in the area can try train-hotel available next to the CFF railway station in Vișeul de Sus. Several other mocăniţa routes are available in the country; we list them here.

Transylvania Train is a tourist train that takes travelers from Brașov on to a trip with stops in Sighișoara (pictured above), Alba Iulia, Mediaș and Sibiu and the surrounding regions. Those who embark on the trip have a variety of activities and experiences to attend in order to discover the beautiful region of Transylvania. More details are available here.