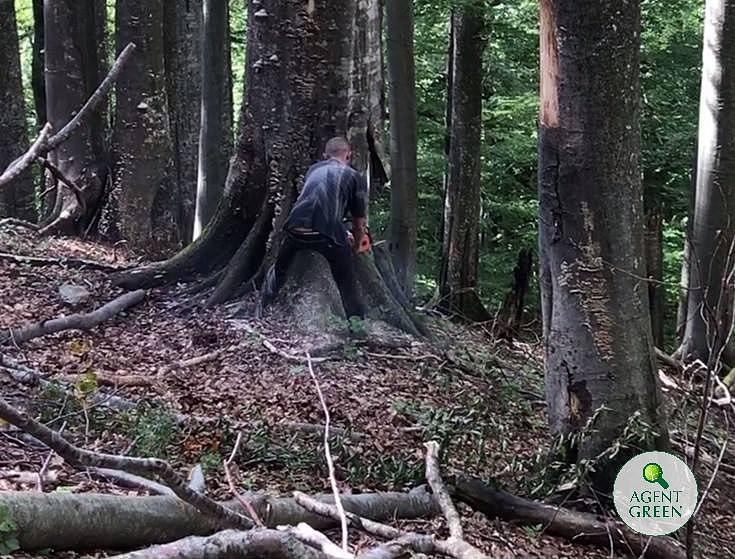 A Netflix crew filming a documentary about illegal logging in the Domogled National Park, in Southwestern Romania, and their local guide – environment activist Gabriel Paun (Agent Green) were allegedly assaulted by loggers as they were documenting in. This is not the first such incident, as Gabriel Paun and Romanian journalists have been assaulted or threatened in the past while trying to get evidence and vide footage about illegal logging.

“Trees from the secular forests in the middle of the Domogled National Park have become cheap furniture all over the Planet and disappoint consumers. "Broken" is the Netflix series that will be broadcast in 190 countries starting with 27.11. In the forest episode, the Netflix and Agent Green team were attacked by loggers. We have all escaped and we will bring to light the truth about the monsters hiding behind a piece of cheap furniture,” Agent Green wrote on Facebook.

Online streaming platform Netflix announced the launch of a mini-documentary series called Broken, on November 27, which presents the dramatic damage caused to nature by the large consumer industry. One of the episodes presents how protected forests in Romania’s Domogled-Valea Cernei National Park and Retezat National Park are being exploited so that the wood can be transformed into poor quality furniture sold all over the world. For this episode, the Netflix crew contacted and talked to Gabriel Paun, an environmental activist at Agent Green, a Romanian non-governmental organization actively involved in combating illegal logging. Paun took them through the woods in Domogled National Park, where they were assaulted by loggers.

“The trip that I took with the Netflix team to show them part of Romania's natural treasure was extremely dramatic. We filmed in Sebes, Retezat National Park and Domogled. When we visited the secular forests of Domogled National Park we met with an exploitation company that I had caught three months ago stealing wood, hand in hand with a Romsilva employee. Although I had made a complaint and they were being investigated by the Police and the Forest Guard, when the workers recognized me, they immediately cut two huge trees that fell on the road, one in front and one in the back, to block our access. Then they continued to cut down thick trees to crush our cars. Somehow, we escaped without anyone being hurt, but everyone was really scared. The saddest thing is that the respective forest, Ciucevele Cernei, is part of the UNESCO World Heritage and we risk losing this status due to illegal logging,” Gabriel Paun told local Adevarul newspaper.

The activist also said that the Netflix documentary aims to expose what is behind sustainability labels such as FSC (Forest Stewardship Council) or PEFC (Programme for the Endorsement of Forest Certification), which often cover the cutting of whole forests an even logging in national parks and secular forests.

The illegal logging phenomenon has been documented by local news organizations in Romania and has been covered by international media as well, especially after the recent incidents in which two forest rangers lost their lives while confronting the local lumber mafia. However, it is for the first time when this phenomenon will get global exposure through the biggest online streaming platform in the world.