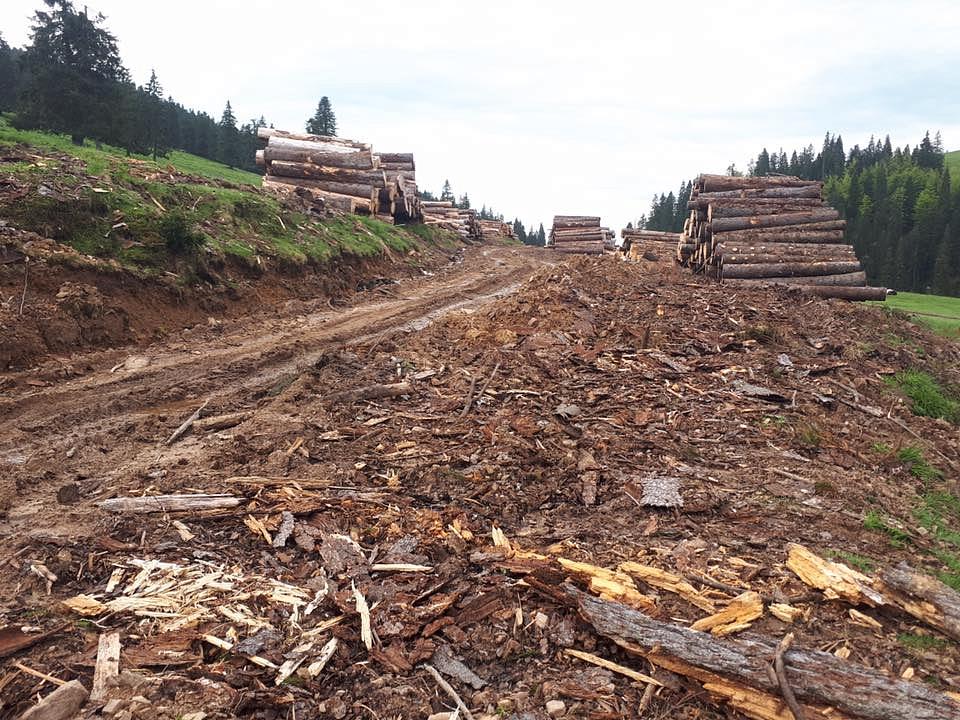 The Romanian authorities have censored the most important conclusion of a 10-year research project carried out by a team of specialists, which shows the real dimension of the illegal logging phenomenon in Romania. Moreover, the authorities discontinued the research project, local publication Recorder.ro reported.

The illegal logging phenomenon has returned to the public agenda recently after two rangers were violently killed while on duty in the last month, most probably by wood thieves. The case of a forest ranger killed in Maramures county last week brought to the surface a string of possible connections between law enforcers and the so-called “lumber mafia”.

“A research department set up by the Romanian state, under pressure from the European Union, has monitored for ten years, using world-certified scientific methods, the activity in Romania’s forests. The results of the report revealed the dimensions of the disaster: every year, 20 million cubic meters of wood disappear from the forests without legal forms. The figure is so high that it exceeds the volume of authorized cuts across the country,” Recorder.ro reported.

Recorder got the information from the researchers who worked on this report, who decided to break the silence after their superiors buried the most important results of the study, namely the amount of wood exploited each year in Romania. The Directorate for Investigating Organized Crime and Terrorism (DIICOT) has reportedly started an investigation into this matter.

The report in question was drafted under a project called the National Forestry Inventory (IFN). Dozens of forestry engineers were schooled in France, Switzerland and Finland to learn the latest scientific methods for inventorying the forests, by using GPS devices, special tablets and metal marks buried in the ground. In the first period of the study (2008-2012), they collected data about the total volume of wood in Romania’s forests. Between 2013 and 2018 they repeated the data collection process and compared the results with their previous assessment. A French specialist also participated in the data processing part. The report concluded that 38 million cubic meters of wood were extracted each year from Romania’s forests.

The IFN team sent the report to its parent-organization, the National Institute for Research and Development in Forestry (INCDS), which approved it and forwarded it to the Waters and Forests Ministry without that figure, according to Recorder.ro.

"We have not received any explanation for why they refused to validate the figure. I told them that it was very important that this figure be communicated to the ministry because, of the 38 million cubic meters, only 18 million are taxed. And most importantly, based on this information, the ministry can get a situation with hot areas, where much wood is cut and security measures need to be increased. You see very well what is going on: forests die because they are not sufficiently guarder in certain areas,” Gheorghe Marin, head of the National Forest Inventory told Recorder.ro.

The authorities explain why they censored the report

"This figure does not represent, does not result from a representative statistical network to determine the volume extracted from the forest,” Ovidiu Badea, head of the National Institute for Research and Development in Forestry (INCDS) told Recorder.ro reporters.

“The Scientific Advisory and Control Commission has not validated this figure knowing that the network was not statistically insured in order to be able to consider and validate this figure,” he added.

In reply, IFN head Gheorghe Marin said the methodology used for calculating the figure of 38 million cubic meters of wood cut annually in Romania was confirmed by specialists from Germany, France and Switzerland. Moreover, he added that Romsilva hasn’t challenged and even took pride in another figure reflected by the study: that of the total volume of wood in Romania’s forests (2.35 billion cubic meters).

"The Romsilva president does not know what he is talking about. If he were curious to take an interest in how we work, he would not say this nonsense. We used the same formula for calculating the total volume of wood, which he is fine with - we are proud that we have a lot of wood in the forest, and for calculating the volume of cut wood,” Gheorghe Marin said, according to Agerpres.

Romsilva: unauthorized cuts are around 50,000 cubic meters per year

Romsilva’s estimates for the illegal cuts in Romania’s forests are much lower. The company, which owns about half of Romania’s woods, claims that the volume of illegal cuts in the forests it manages are between 40,000 and 50,000 cubic meters per year. “This means a volume of 0.01 cubic meters per hectare per year. It means a beech or spruce tree with a diameter of 8 centimeters. If you think illegally cutting a pole on a hectare is a danger, I assure you it is not,” Romsilva general manager Gheorghe Mihăilescu said in a conference earlier this month, to the outrage of environment organizations.

Romsilva manages 3.13 million hectares of forests owned by the state, which represents 48% of the total forest area in Romania. The remaining 52% are held by private owners.

An investigation carried out by Recorder.ro in the northern Romania region of Bucovina shows methods by which local firms illegally cut and carry wood with the complicity of the forestry authorities that should guard the forests and prevent such activities. The most common method for stealing wood is the “addition method”.

Briefly, this means that lumber companies officially bid for harvesting trees that are feeble or dried but, in the field, the forest workers mark think and healthy trees. Thus, for each cubic meter of wood they buy officially at auctions, the timber companies get two cubic meters, one of which they pay without legal forms. Money from these informal payments makes its way up through the system, reaching public officials and party leaders and financing electoral campaigns, Recorder.ro explains. Moreover, the system is built in such a way that the companies that want to operate legally can’t support their business.

This video investigation by Recorder.ro explains very well how the system works.