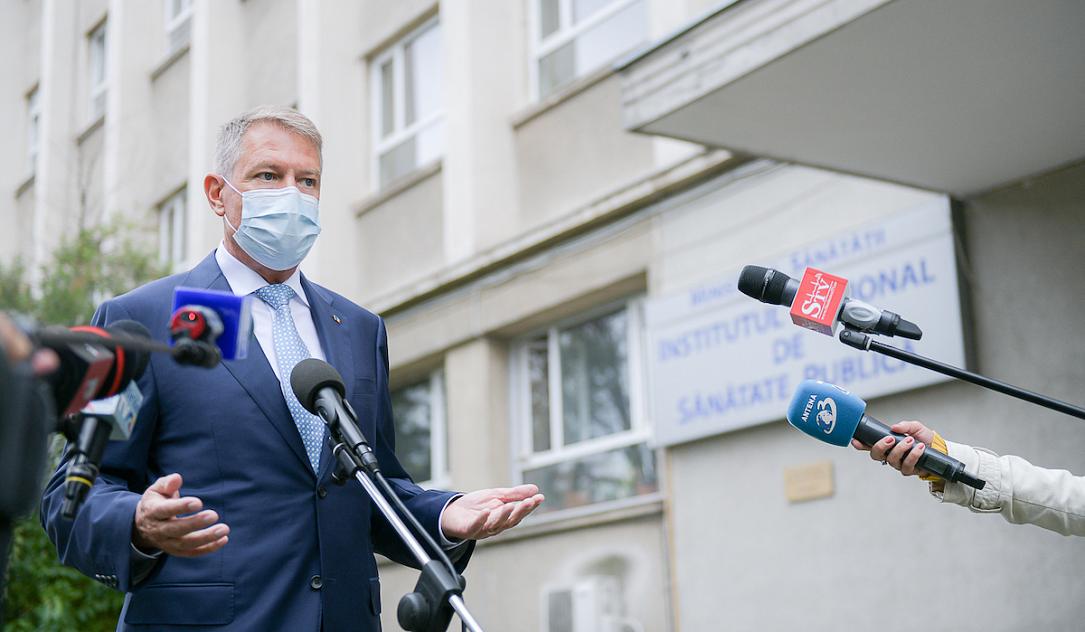 The Romanian authorities ponder introducing new restrictions, such as making masks mandatory in all public spaces or restricting private events with many participants, such as weddings, to limit the spread of the coronavirus. However, reinstating the state of emergency is not an option at this moment, president Klaus Iohannis said on Friday, October 9.

Romania reported the highest daily number of new COVID-19 infection cases since the start of the pandemic, on Friday - close to 3,200. This is six times more than the highest daily count recorded during the state of emergency - 523 on April 11. More than 8,700 patients are now treated for COVID-19 in local hospitals, 613 of whom were in intensive care (ATI) sections.

He believes there are lighter measures that could generate better results. “The best prevention is wearing mask, keeping distance, hygiene. We don’t need to close the whole country for a containment effect. We don’t need the state of emergency to wear mask. At this stage, I don’t intend to reintroduce the state or emergency, but I believe in prevention measures,” Iohannis said.

“I believe that we should restrict events that gather many people, where control is more difficult,” he added, referring to weddings, baptisms and other private events where people generally ignore the restrictions.

The president also recommended Romanians to wear masks all the time when they leave home and suggested that measures to make masks mandatory in more places are being discussed.

Meanwhile, the head of the Emergency Situations Department (DSU), Raed Arafat, said on Thursday evening that masks could become mandatory in all public spaces in some areas if the infection numbers continued to grow.

On Friday, DSU sent a warning through the emergency notification system (RO-Alert) to Bucharest residents informing them that the number of new COVID-19 cases in the city (in the last 14 days) went over 2 per 1,000 inhabitants. DSU urges Bucharesters to respect the sanitary measures, wear the mask correctly, and avoid crowded spaces.

Some 17 schools in Bucharest went from the yellow scenario to the red scenario, which means they will close and students will continue their learning online, Digi24.ro announced. More schools could be closed in the city if the situation worsens. Meanwhile, the local authorities in Bacau, one of the biggest cities in Romania’s Moldova region, also decided to close the schools.

These measures come after the closing of restaurants, cafés, bars, clubs, casinos, cinemas and theaters in Bucharest, Iasi and other cities with high numbers of COVID-19 cases.

Romania also introduced new restrictions for travelers who enter the country coming from high-risk areas. Starting October 7, all travelers from Spain, France, UK, Netherlands, Belgium and other countries with high COVID-19 incidence rates will have to quarantine for 14 days when they enter Romania.

However, the current restrictions are lighter than those that were in force during the state of emergency (between March 16 and May 15), when people's movement was restricted and non-essential services were closed. The lockdown caused a dip of almost 12% for the local economy in the second quarter versus the same period of 2019.

President Klaus Iohannis is trying to avoid a new state of emergency, which would likely hit the economy and lead to postponing the general elections, a nightmare scenario for the ruling Liberal Party (PNL).