Who is AUR, the anti-system movement that has become the new force in Romanian politics? 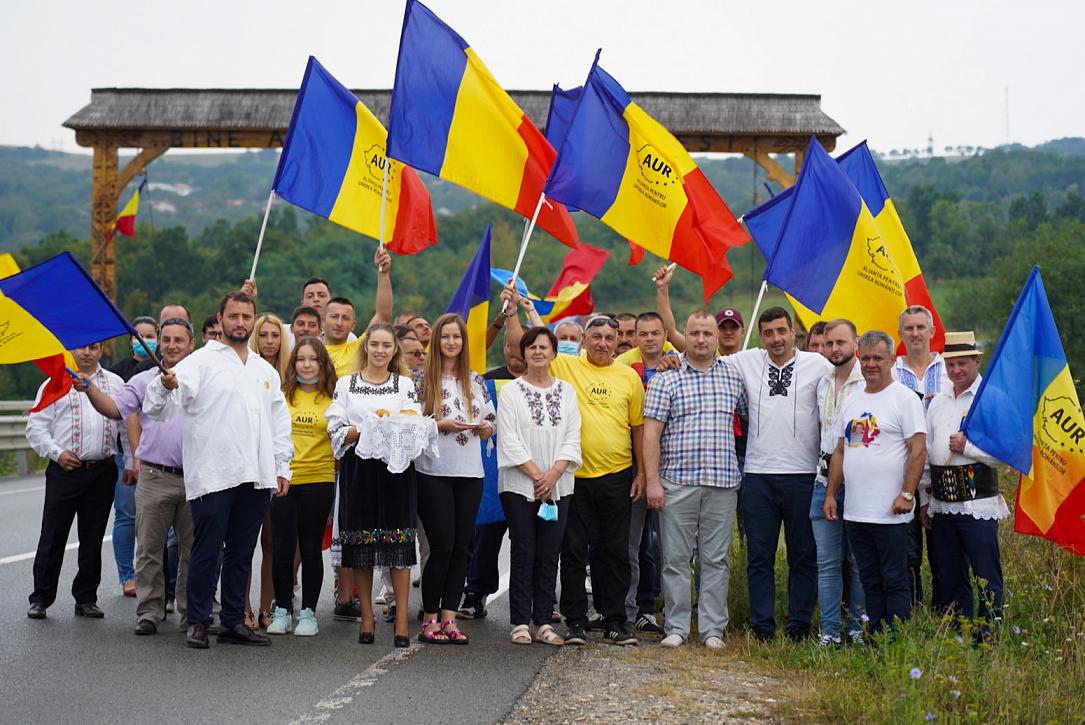 The December 6 parliamentary elections in Romania have brought a new political force on the local scene while also marking the political demise of three once almighty politicians. The big surprise is called the Alliance for Romanians’ Unity (AUR), a conservative and nationalist political party established just one year ago, on December 1, 2019, which took 9% of the votes in the recent parliamentary elections. The acronym of the party’s name, AUR, means gold in Romanian.

Nobody predicted this score, especially after AUR took only 0.45% of the votes in the local elections in September. In just three months, the party jumped from 36,000 votes taken in the elections for the local councils to almost 530,000 votes in the elections for the Parliament without running costly advertising campaigns on Google and Facebook and without much promotion on local televisions.

AUR, whose candidates are largely unknown to the general public, has thus become the fourth-biggest party in Romania’s Parliament, with 47 MPs or some 10% of the total mandates. Meanwhile, the Popular Movement Party (PMP) of former president Traian Basescu, and PRO Romania, led by former prime minister Victor Ponta, didn’t make it to the Parliament.

In just 24 hours after the elections, 15,000 Romanians joined the party’s ranks by filling in the online adhesion.

What does AUR stand for?

The Alliance for Romanians’ Unity (AUR) aims to “achieve the unity of Romanians, wherever they may be, in Bucharest, Iasi, Timisoara, Chernivtsi, in Timoc, Italy or Spain, for our very existence as a nation,” according to the party’s official presentation.

AUR launched in December 2019 as the party of Romanian diaspora. Its launch came just weeks after a record number of 900,000 Romanians living abroad voted in the presidential elections. AUR quickly opened branches in the countries with big Romanian communities. For example, in the UK, the party opened 20 local bureaus. As a result, AUR took 25% of the votes of Romanians abroad in the parliamentary elections, almost the same score as the National Liberal Party (PNL), while the USR-PLUS alliance was first, with 30% of the votes.

“The Alliance for the Unity of Romanians (A.U.R.) is a conservative political party, established in Romania in December 2019. It aims at being the result of the unification of the Romanian forces committed to serving the national interest of the Romanian people, and at coming to legislate and govern in favor of these interests,” reads the description on the party’s official website.

AUR says it supports Article 1 in Romania’s Constitution which states that “Romania is a national, sovereign, independent, unitary and indivisible state.” “This article is often violated and subjected de facto to attacks by current political forces aiming to renounce the sovereignty of Romania through forms of internal or external federalization,” the party claims.

“Likewise, considering the territorial raptures to which Romania has been subjected, we militate for Article 1 in the 1923 Constitution concerning the national territory, and we emphasize Article 3, item 4 in the current Constitution, which specifies that no foreign populations may be settled or colonized on the territory of the Romanian state,” reads the party’s program, indicating a strong anti-immigration position similar to that of the ruling parties in Hungary.

AUR says its doctrine is based on four pillars: faith, liberty, family, and motherland. The party’s core values put a strong emphasis on the Christian faith, and on the moral vision inspired by faith, on the traditional family, and on nation and national identity. At the same time, AUR positions itself as a defender of these values against “New-Marxists ideological attacks.”

“We are against the persecution campaign to which Christianity has been subjected in the past decades. A.U.R is opposed to the denigration of the clergy, slurring of religious symbols, and maligning the faithful who dare assume publicly their Christian commitment. Romania is still a strongly Christian nation, and we want to keep it that way,” reads the party’s presentation.

“The family is the basic cell of any viable society, and the society needs to stimulate, support and protect the family. Just as an organism cannot stay alive unless its cells are preserved in a healthy condition, so a society can only survive if it maintains the classical pattern of the family. Primordially, naturally, religiously, morally, and bioethically, the family is made of one man and one woman. Particularly, the family needs now to be defended against left-wing political correctness, against Neo-Marxist ideological attacks, which try to destroy it under the pretext of modernization, and invoking the false flag of ‘human rights’, of Western extraction,” according to the same document.

For the messages it promotes, some local media have labeled the party as “extremist,” but AUR representatives reject this label. “We represent a new force, we are not extremists, but we are radical. We are radical towards the system that has destroyed our hope for life in Romania in the last 30 years. We call on all Romanians in good faith to join AUR to change Romanian society,” reads one of the party’s Facebook posts after the December 6 elections.

Still, some of the party’s leaders are open about their sympathy for the former legionary movement, a fascist movement that briefly came to power in Romania during World War II. For example, Darius Pop, a 26-year-old drummer, who is the new AUR MP in Maramures, refers to AUR leader George Simion as "our Captain," which is what the legionnaires used to call the founder of their movement, Corneliu Zelea Codreanu, according to G4Media.ro.

What other messages does AUR promote?

The party’s surprising ascent has come amid the sanitary crisis caused by the COVID-19 pandemic. AUR thus draws its support from those who support the pandemic negationism, anti-mask and anti-vaccination theories. In recent months, the party’s leaders organized protests against the obligation to wear masks and against other restrictions, such as the ban on pilgrimages.

One of the party’s most vocal figures, Diana Ivanovici Sosoaca, has become very popular among those supporting these currents after she advocated for lifting restrictions for the Saint Parascheva pilgrimage in Iasi and she represented in court the Archbishop of Tomis in his quest to organize the Saint Andrew pilgrimage. Sosoaca won a senator seat in Iasi county.

In 2019, one of the party’s leaders was involved in the inter-ethnic incidents at the cemetery in Valea Uzului, where Hungarian, Romanian and other nationality soldiers were buried in the first world war. Thus, the local media has also labeled AUR as an anti-Hungarian party.

Who are the party’s leaders?

The party’s most influential representative is George Simion, 34, a Romanian civic activist who has been advocating for Romania’s Union with the Republic of Moldova for many years. He is AUR’s co-founder and co-president.

George Simion first came to public attention while running as an independent in the 2019 European elections. Under the slogan "Greater Romania in Europe," he promoted topics such as the union of Bessarabia with Romania, protecting the rights of Romanians in historical communities, supporting the Romanians from Harghita and Covasna counties, capitalizing on the potential of the diaspora and counteracting what he called the “mafia system” blocking the development of Romania and the Republic of Moldova. He took 117,000 votes, or 1.29% of the total.

Simion is also known for his radical protests against former president Ion Iliescu, according to local publication Buna Ziua Iasi (bzi.ro). Simion is also a member of a group of “ultras” supporters of the Romanian national football team, according to Digisport.ro.

The other AUR co-president is Claudiu Tarziu, 47, a journalist and former member of the National Coordination Council of the Coalition for Family, which spearheaded the initiative to ban gay marriages in Romania by changing the Constitution. The coalition gathered over three million signatures to initiate a referendum for changing the Constitution, with the large support of the Romanian Orthodox Church. The referendum took place in October 2018 but was invalidated due to low turnout. About 3.86 million Romanians participated in this referendum, representing 21% of the population registered to vote. Over 3.53 million people voted for changing the Constitution. “Whoever boycotts the referendum or votes against it is against freedom, loveless and irresponsible,” Tarziu was quoted as saying at that time, according to G4Media.ro.

Another important AUR leader is Sorin Lavric, 53, who heads the party’s Senate. He is a writer, philosopher, and university professor. He has a Ph.D. in philosophy and his thesis analyzes Romanian philosopher Constantin Noica’s connection to the Legionary Movement. Lavric’s doctorate coordinator, famous Romanian philosopher Gabriel Liiceanu, notes in an article that his disciple has suffered a similar transformation as the one he had written about in Noica’s case. Sorin Lavric has also been widely criticized for his offensive statement about women. "No man seeks in a woman cleverness, depth or lucidity," he wrote in one of his books in which he also says the Roma are a "social plague," according to Stirileprotv.ro. The Romanian Writers’ Union decided to revoke Lavric’s member status after the media wrote about his statements, following the December 6 elections. Lavric was elected MP on AUR's lists in Neamt county.