Skip to main content
OpEd
Comment: When offensive license plate message could turn into call to action against the system 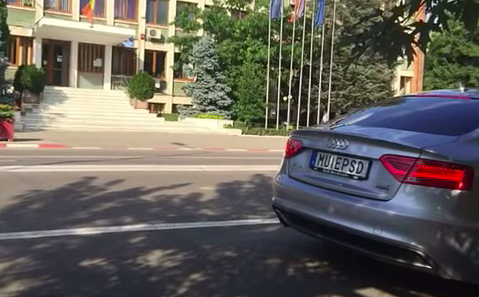 The Romanian authorities’ reaction to an offensive message against the local ruling party written on a car’s license plates has only boosted it, turning it into the main story of the day.

A video showing the traffic police officers taking down the offensive plates off the car after stopping its driver in traffic at 6 AM in the morning became viral, hitting over one million views on Facebook in less than eight hours.

The video on the car owner’s Facebook page also had over 16,000 shares and over 1,200 comments. Most of the comments expressed solidarity to the man and criticized the police officers’ actions. Hundreds of negative comments were also posted on the Romanian Police’s official Facebook page, accusing the institution of abusive behavior and of serving the ruling party’s interests.

Thus, what started as a practical joke about two weeks ago seems to have turned into a headache for the Social Democratic Party (PSD).

The offensive message, displayed on the personalized license plates of a car registered in Sweden, was initially seen as a defiance act by the car’s Romanian owner. The initial reaction to the pictures with the plate reading “MUIE PSD”, which roughly translates as “FUCK PSD”, was mostly amusement.

However, the phenomenon slowly gained traction on social media as well as in mainstream media in Romania after reports of farmers who wrote the same message in their field crops. But what I believe alerted the authorities into taking action against the defiant driver was the Sunday evening football derby between arch-rivals FCSB (Steaua) and Dinamo Bucharest. Factions of the two teams’ ultras, which have been used to swear at each others with the same message for years, forgot about their rivalry for several moments to swear against the ruling party taking the offensive message to the stadium.

The Police’s decision to stop the driver, take his car’s license plates and suspend his driver’s license, especially after the man got away with not even a warning on three other occasions, turned him into a victim of the political power’s abuses in the eyes of many. Some even see this as an attempt by the authorities to limit the freedom of expression, especially as the Police hasn’t managed to come up with a clear explanation on what laws the man actually broke while the Swedish Embassy reacted saying that the plates were valid throughout the EU.

Moreover, some commentators pointed out to local celebrities who also have personalized license plates on their cars and haven’t been disturbed by the police.

Thus, by trying to put out a fire, the authorities may have actually poured gasoline on it. With thousands of Romanians expected to return from abroad in August for the summer holidays, the political leaders in Bucharest will probably have to deal with more of these messages.

A family of Romanians living in Belgium have already announced they would return to the country with the following message on the license plates of their car: 1 JOS PSD (1 Down with PSD). Others may take their example.

Moreover, a big rally of the Romanians living abroad is expected to take place in Bucharest on August 10 and the PSD-led Bucharest City hall has already made some waves around it with its initial decision not to approve the protest. With each such decision, the PSD is likely to bring more protesters to the Victoriei Square on that day.

Some of the intellectual elite who have been protesting against the ruling party’s initiatives in the last year and a half, such as changing the laws of justice by putting more pressure on prosecutors and changing the criminal codes by making it more difficult to prosecute corruption offences, may not embrace the offensive words against PSD. Famous writer Mircea Cartarescu even wrote a Facebook post condemning this message, saying those who use the swear words have gone down to the same low level as the PSD.

However, the message may awake the larger masses of Romanians, those who are also unhappy with the ruling party’s policies but haven’t yet found a good enough reason to go to the streets.

Thus, what started as an offensive joke, may turn into a call to action - or, it may just fade away like many other social media "revolutions" that Romania has experienced in recent years. So maybe, just like the rainy summer in Romania is something out of the ordinary,  the month of August may also not be a normal holiday month in Romania.