Comment: NYE celebrations, US vs. Romania: From the Ball Drop in Times Square to… what could Romania “drop”? 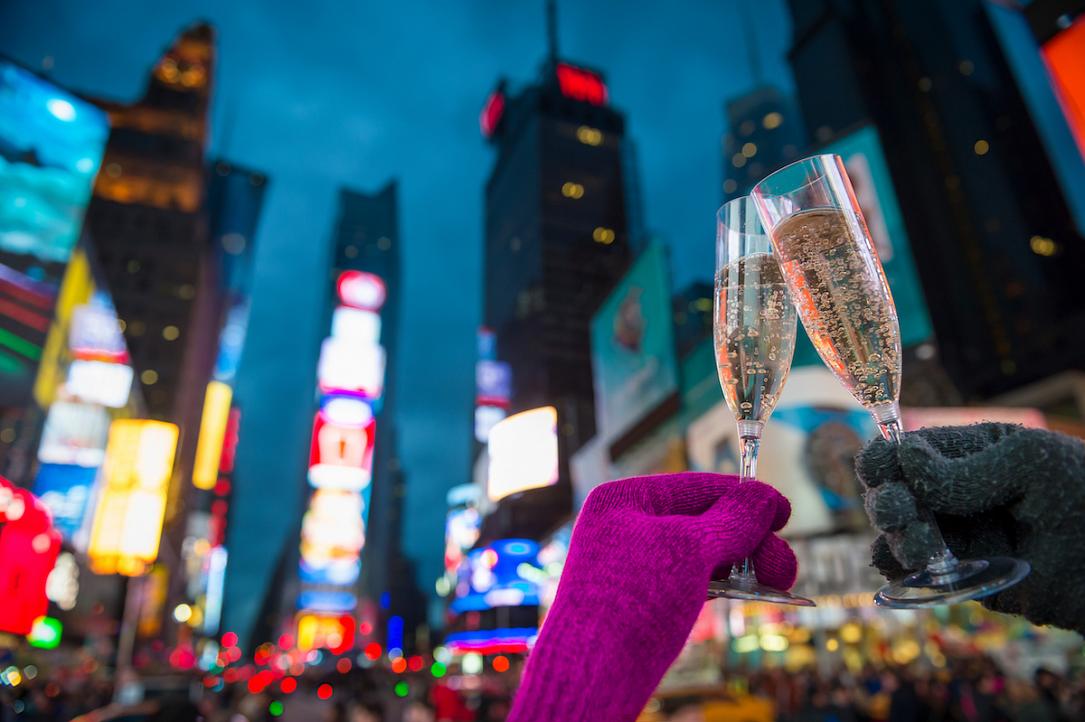 As luck would have it, I spent part of the second day of Christmas in Romania with two Idahoans, in a creativity-inducing working session, with lots of chocolate and (strong) American coffee.

New Year’s Eve is fast approaching and, in Romania, it is a much bigger deal than in the United States. Here, people have booked their parties for several weeks. Almost everyone is going out to a restaurant or club, to the Romanian mountains or even abroad.

In 10 years in the United States, I think I went to two “real” New Year’s Eve parties, meaning parties in restaurants – for most of the other times, I spent New Year’s Eve with friends and relatives, celebrating in someone’s house. At times, I even fell asleep with the kids shortly after midnight.

Romanians are spending a significant amount attending New Year’s Eve Parties in restaurants or clubs. Food seems to be the “cultural symbol” of Romanians’ Christmas and New Year’s celebrations. Americans, on the other hand, have created the perfect cultural symbol that has forever changed New Year’s Eve and turned it into a cash cow without having to charge people for food, drinks or sitting space. They charge advertising companies instead.

The very last New Year’s Eve I spent in Bucharest, prior to immigrating, in 2006, was in a club. Not being a fan of cigarette smoke (thanks God for the cigarette ban imposed in the meantime in Romania), crowded and (at the same time) dimly lit spaces, my ideal New Year’s Eve party would literally be spending the evening with people I enjoy having conversations with. And good wine. Looking for that ONE thing – be it having a conversation, meeting a person or having an experience – that would make a New Year’s Eve party memorable.

But, as my Idahoan friends were remembering their state’s New Year’s Eve tradition – the Potato Drop – I, too, recalled that on New Year’s Eve, Americans would watch – hundreds of thousands if not over a million of them, - live, from Times Square in New York City:  the famous Ball Drop. One billion people watch it drop on their TV sets, with at least 100,000 million watching in the United States, every year. Now, that’s memorable.

The ball started to drop in Times Square in 1907, the same year the Romanian Peasants’ Revolt happened. Why does this matter? What can such a comparison, of apples and pears, show us? The two “movements” were both about freedom. The 1907 Revolt was a cultural symbol most Romanians have learned about in school. There are values deriving from it, linked to our Romanian culture. But it is a “dead” cultural symbol. For it to have stayed alive, a representation of its core values should have been enacted yearly within our society. Without it being carried on by the contemporaries, any cultural symbol dies.

In America, re-enactments of important historical events take place all the time. Even small towns take pride in re-enacting events that are deemed relevant to their beginning. The dropping of the ball is a constant reminder, a re-enactment, a continuum. It is a symbol that what is important to Americans will NOT be forgotten.

Cultural symbols that have the power to stay alive say a lot about a society’s evolution and impact in the world.

At the time of the Peasants’ revolt in 1907, Romania was a new monarchy  – culturally linked, through its nobility and intellectuals, mostly to Paris and Vienna. The discrepancies of the “two Romanias”, in existence today, as well, were obvious back then, too. On one side, you had the agrarian society and the vastly (then) rural Romania. On the other side, you had the monarchy, the nobility, the cultural world of Bucharest and Iasi. Cultural and national symbols WERE being created by and through the national newspapers, like Adevaruland Dimineata, which were reporting on the revolts throughout the month and a half they lasted, killing thousands of peasants. The monarchy itself was a cultural symbol which did pass the test of time, even though not entirely. We, Romanians, could see how much we still treasure this symbol on the day of King Michael’s funeral.

Across the pond, Adolph Ochs, owner of The New York Times, created, also in 1907, the most powerful and socially permeating cultural symbol aside from Lady Liberty. Little did Adolph know that, out of his desire to elevate a series of New Year's Eve fireworks displays he held at the newspaper’s building in Times Square, the worldwide Ball Drop movement will be born.
The Ball, designed by Artkraft Strauss, a preeminent designer and creator of many of Times Square’s iconic signs and symbols, was first dropped on December 31, 1907, to welcome 1908. It has, since, dropped annually, except for 1942 and 1943 in observance of wartime “dimouts” or lighting restrictions.

Cultural symbols have enormous power. They are being adopted and expressed in people’s behavior, in their vocabulary, in the dynamic of their relationships. Cultural symbols are cash machines. In creating cultural symbols that are representative for the universal values of freedom and power, Americans have exemplified the creative genius no other nation has been able to match during the past two centuries or so.

Creating such a powerful symbol of freedom, power of expression, and innovation, such as the Times Square Ball, was genius. The Ball Drop in Times Square brings in hundreds of millions of dollars in advertising revenue, from the super-lit billboards and signs. Tourists list the “Ball Drop” as a Bucket item.

Copycats across the United States replicate the Times Square Ball Drop at the local or state level. Among the most interesting (read “odd”) items dropped for New Year’s Eve Celebrations across the United States, are the Potato Drop in Boise, Idaho; the peach drop in Atlanta, Georgia; the musical note drop in Nashville, Tennessee; and the hog drop in Fayeteville, Arkansas.

There is always a party along with any of the “drops”, resulting in people gathering in town or city squares to celebrate.

What item could we “drop” in Bucharest, I wonder? What could create a national symbol, something that would survive through the year, and also say something about our personality, as a nation…

If we were in Brazil, it would be a soccer ball; in Holland – a giant tulip; in Switzerland – a huge slice of cheese; in Belgium – a big bar of chocolate. What truly symbolizes us, as a culture? Something that’s positive – something that we could “drop” in all central squares across Romania, close to midnight on New Year’s Eve? I’d be curious to hear your suggestions.