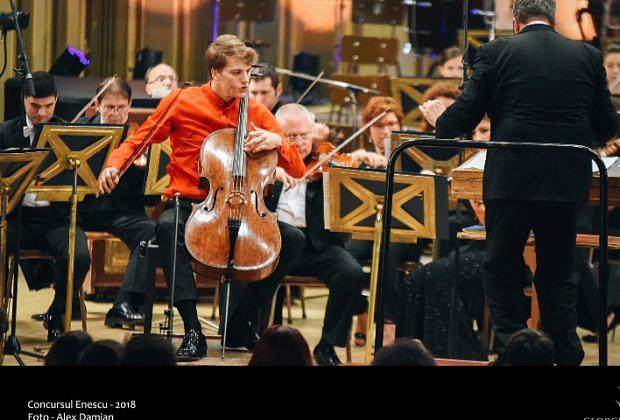 He performed the Cello Concerto No 1. in E flat minor op. 107 by Dmitri Shostakovich, accompanied by the George Enescu Philharmonic Orchestra, under the baton of conductor Paul Watkins.

The first prize of the 2018 George Enescu International Competition amounts to EUR 15,000, the second prize is EUR 10,000, and the third prize is EUR 5,000. Moreover, the big winner has the chance to perform at the George Enescu Festival alongside some of the most important orchestras of the world. In addition, conductor Paul Watkins offered the winner Marcel Johannes Kits the possibility to perform together on an international stage next year.

Marcel Johnannes Kits was born on May 2, 1995. He plays on a cello made by Francesco Ruggeri in Cremona, in 1674, and with a bow made by Victor Fetique. He is studying at the Berlin University of the Arts with Prof. Jens Peter Maintz and has participated in several masterclasses. He has also performed as a soloist with various orchestra such as the Estonian National Symphony Orchestra, Tallinn Chamber Orchestra, Pärnu City Orchestra, Latvian National SO, Württembergische Philharmonie Reutlingen, Jerusalem Symphony Orchestra, and St. Petersburg SO. Moreover, he is a laureate of the International “Dombrovsky” Competition and the “Johannes Brahms” Competition.

The George Enescu Competition will end on September 23. More details are available here.