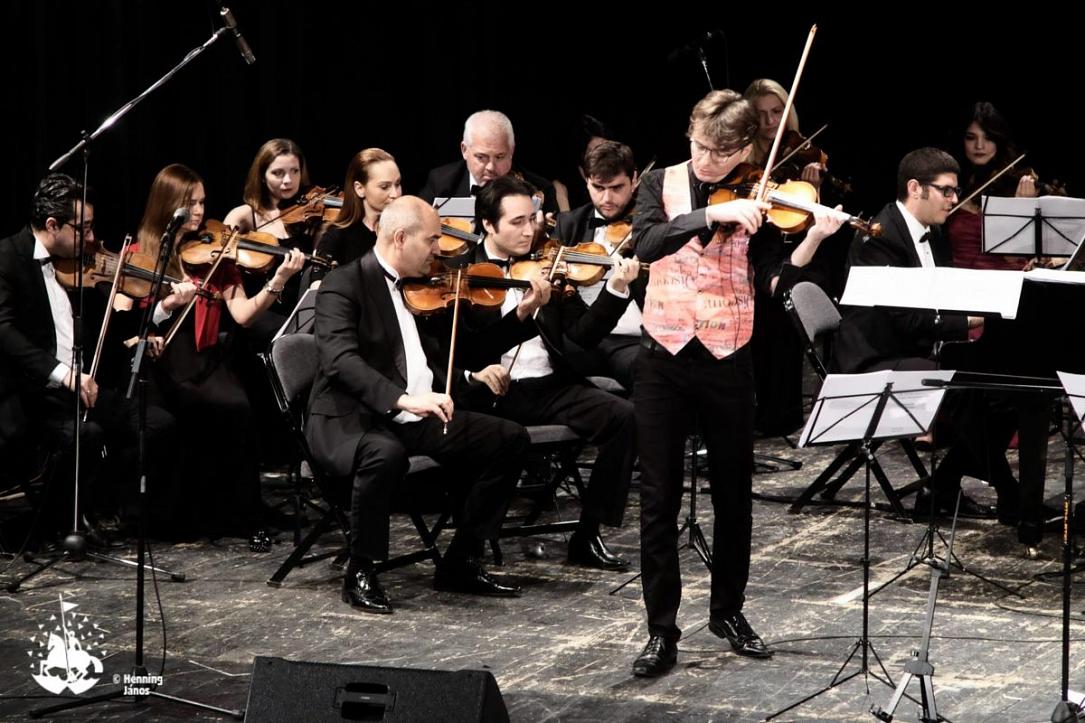 For a third year this June, the vibrate! festival will open in the central Romania city of Brașov, bringing classical music to unusual settings, an international line-up and cross-over events.

Young Romanian musician Vlad Maistorovici set up the festival. He is a violinist, who performs a repertoire ranging from classical to modern, and a composer, whose music has been performed by world-class ensembles, like the London Symphony Orchestra, which recorded his Halo piece. He tells Romania-insider.com about the program of this edition of the festival, including a concert on clay at the local Tennis Arena, and about his experience with performing and composing.

Was there a specific moment when you knew you wanted to take on composition?

I started composing when I was 9, so it was all very instinctive. I was set on becoming a violinist when I went on to study at The Yehudi Menuhin School. At 17 I won a composition prize at the Enescu Competition with no formal studies, and I met Ștefan Niculescu, who was the chairman of the jury. He was a very luminous figure that somehow put the idea inside my head that I had a duty to become a composer. I suppose that's when I decided to be professional about it.

How do the two roles - violin playing and composition- balance each other today?

It is sometimes a challenge to balance the two. But I need them both in my life. As a performer I submit myself to the universe of the composer, I invest my energy and time to embody that music. It's creative, but within boundaries of style, taste, message. The greatest satisfaction is human contact, the high of performing in front of the audience, the energy exchange with the orchestra.

Composing is more solitary, you are working by yourself most of the time. But you have the privilege to set the game for the performers. It's a huge responsibility, and a huge satisfaction when performers get excited about your music.

What do you keep in mind throughout the process of composing and what do you hope to communicate?

I think music should communicate emotion. Of course, we study many years to master every device, technique and so on, and that is all challenging. European music has had a rational basis for hundreds of years, even when incorporating exotic elements. But all of that is in the service of communicating in a way that no other language can. I try to express that which cannot be easily verbalized.

Where do you take your influences and references from?

I like taking my subjects from the mainstream, but then I let my music go to remote places of the imaginary. Almost all my pieces can be listened to in this key.

Who were some of the figures influencing your playing and composing in the past?

My two idols as a kid were George Enescu and Freddie Mercury!... But the real influences came in time from the amazing musicians I had the privilege to study and play with: my violin teachers Felix Andrievsky, Pierre Amoyal, Natasha Boyarsky, Boris Kuschnir, Gordan Nikolich and my composition teachers Mark Anthony Turnage, Jonathan Cole, Dan Dediu, Colin Matthews, Magnus Lindberg. There are many others.

What does setting up a festival like vibrate! entail? Why did you choose Brașov? How do you see it evolving in the coming period?

It was a dream to start a festival, but I am very lucky to have met the people who embraced the idea. Brașov, like many places in Romania, is extremely beautiful, and it inspired us from the beginning. Then the local community embraced the festival at all levels. We started with funding from the Local Council, the National Cultural Fund, and this year we have two international partners, Arts Council of Wales and Sinfonia Cymru. The festival developed very fast, but it's only the third edition. We strive to establish a unique musical event that will give people around the world a reason to come to Brașov every year in June.

What will this year’s edition of vibrate!festival look like?

I am very excited about it. The concept this year is “Pulse”, it's about rhythm, motion, physicality, liveliness. For the first time we have a resident chamber orchestra, the innovative Sinfonia Cymru from Wales. Together we will go as far as doing a concert on clay at the local Tennis Arena, pitting instruments against each other in Biber's Battalia, Concertos by Vivaldi and Schnittke's Moz-Art a la Haydn on the tennis court! The featured composer this year is Mark Anthony Turnage, and we are premiering his Six Pint Sized Pieces for violin and piano written especially for the festival. Some of the artists are coming back (such as Valeriy Sokolov, Pau Codina, Shiry Rashkovsky), some are coming for the first time (such as Teodora Gheorghiu, Sam Armstrong). There will be exhibitions, informal talks, street pianos...

Are there certain audience segments you hope to reach?

Has the experience with the festival been what you expected?

I learned a lot. It is a great way for an artistic mind to keep grounded. We have a hard working, open minded team and working with non-musicians makes me a better artist and person.

Working both in the U.K. and Romania, are there differences you need to adjust to when going back and forth?

I find that passion for music is the same everywhere. As a musician in the 21st century you work in different countries often at the same time and of course that means you need to adjust to different ways of doing things. But when you have a shared goal, a shared passion, shared artistic values, the differences become opportunities for stronger projects.

Several pieces by Vlad Maistorovici can be found here.