Skip to main content
Politics
US Independence Day: President, PM say Romania will continue to be a strategic ally of the United States 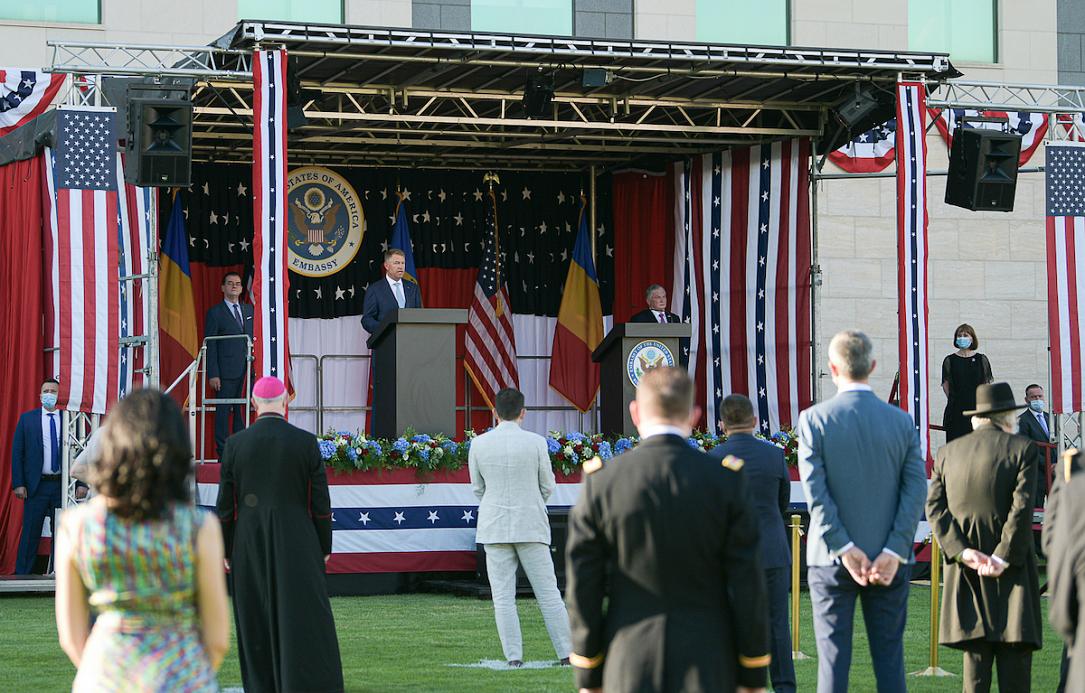 Romania will always be a "strategic ally and a firm friend" of the United States, dedicated to close transatlantic cooperation, president Klaus Iohannis said on Thursday, July 2, at the reception held by the US Embassy in Bucharest on the occasion of the 244th anniversary of the US Independence Day.

"Today's complex global context is marked by major challenges. The COVID-19 pandemic, the intensification of global competition, and international actors' attempts to erode transatlantic unity and the resilience of democratic states overlap, and their effects have an impact on all transatlantic partners. For Romania, the answer to these challenges is solidarity! Solidarity in the bilateral relationship of Strategic Partnership with the United States of America. Solidarity within the European Union. Solidarity in the transatlantic relationship," the Romanian president said during his speech on Thursday.

"We celebrate in 2020 140 years of diplomatic relations with the United States of America, and in all this time, Romania proved that it intends to actively strengthen this solidarity. This is also the reason why, last year, at the White House, together with the president of the United States, we added two new areas to our Strategic Partnership: security of 5G networks, whose resilience will largely depend on the success of the new digital economy, as well as the nuclear-civilian field, which plays a key role in ensuring energy security," he added.

Iohannis also said that Romania remains "strongly committed to supporting a strong and supportive transatlantic relationship, based on strong bilateral relations between the United States and its European partners, a North Atlantic Alliance dedicated to the indivisible security of its members and the cooperation with the European Union."

"I assure you that Romania, a strong strategic partner of the US, and the state deeply committed to consolidating the transatlantic relationship, both in the form of the North Atlantic Alliance and the US-EU cooperation, will act further to intensify this relationship. Romania is and will continue to be one of the reliable allies of the US; it is a natural option based on common values, ideals, and interests shared by our people," Orban said on Thursday.

In his turn, US ambassador Adrian Zuckerman said that, in the last 30 years, "Romania has become one of America's closest allies and partners," and that the two countries share a common vision of transatlantic unity.

The ambassador added that the United States remains "committed to improving the rule of law in Romania, ensuring Romania's sovereignty and security, and creating the opportunity for all Romanians to prosper." The US is also committed to "supporting Romania's economic recovery and ensuring economic stability."