Air travel: Routes from Romania announced for 2022 & the airport reopening planned for this spring 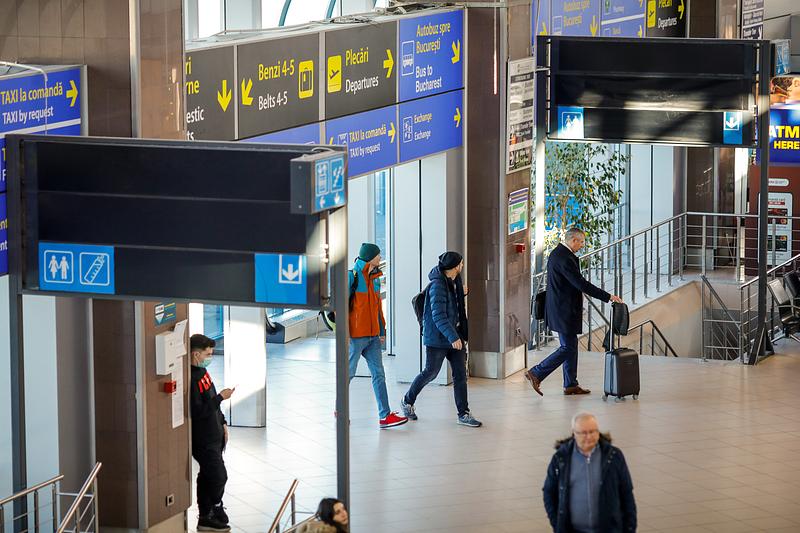 As air traffic began to recover last year, additional routes from the country to destinations mainly in Europe were introduced, and more were announced for this year. Bucharest's secondary airport in Băneasa is scheduled to reopen this year, and several regional airports kicked off or are planning to roll out investments projects.

As vaccination campaigns were rolled out in 2021 and a Covid-19 digital certificate was introduced in the EU, the air traffic bounced back, and 2022 traffic is expected to recover to 70-90% of 2019 levels, Eurocontrol's Aviation Intelligence Unit Think Paper #15 (January 2022) notes.

The first nine months of 2021 saw a 30.8% increase in local air passenger transport compared to the similar period of 2020, from 6.11 million passengers to 7.9 million passengers, according to data from the National Statistics Institute (INS).

When it comes to domestic traffic, the Henri Coandă Airport in Bucharest had 49.5% of the boarded passengers, the Avram Iancu Airport in Cluj-Napoca 16.4% and the Traian Vuia Airport in Timişoara 13.9%.

Wizz Air announced it would add more routes from Cluj-Napoca, in western Romania, and Craiova, in the southern part of the country, to several destinations in Europe. The carrier is to connect Cluj-Napoca to Valletta, Malta, beginning March 208, and to Nice, starting August 1. From Craiova, it will fly to Barcelona, from August 30, Brussels South Charleroi, from August 29, and Paris Beauvais-Tille, from August 31.

In December 2021, it added flights from Bucharest to Aqaba, Jordan, from Iaşi to Madrid and from Suceava to Brussels. Also last year, it increased the number of flights on two routes operated from the "Stefan cel Mare" International Airport in Suceava, in northeastern Romania. It introduced daily flights on the Suceava - Milan-Bergamo route, and four flights per week to Rome-Ciampino. It also started connecting Bucharest to Gran Canaria, Spain, and Cluj-Napoca to Billund, Denmark. It introduced three new routes from the cities of Cluj-Napoca and Iasi to Greece, and over the summer period, it added two new flights from Bucharest to Zakynthos and Corfu.

Starting April, Blue Air will offer a weekly flight from Bucharest to Porto (Portugal), expanding the service from June to two weekly flights.

Also this year, Blue Air plans to have a permanent base in Iaşi and operate direct flights from Iași to London - Heathrow, Barcelona, ​​Rome, and Paris - Charles de Gaulle.

Last year, the airline started operating two weekly flights between Iaşi and Dublin, with a third to be added in June of this year.

2022 should also see the emergence of a new airline as local Fly Lilly received its air operator certificate last year, Marius Ioan Gîrdea, the GM of the Sibiu Airport, told Agerpres. The line would use Sibiu as a base, he explained. On its website, the line describes its core business model as being "based on Schedule, Charter, ACMI, CMI flight operations, both passengers and cargo."

As for Ryanair, the carrier introduced last year a route from Bucharest to Sofia flying two times a week from August as part of its Romanian Summer '21 schedule. The same schedule saw the addition of four routes from Romania to Rhodes, Corfu, Manchester, and Palma de Mallorca. Starting July, it operated three flights per week from Bucharest to Manchester and two weekly flights from Suceava to Rhodes and from Sibiu to Corfu.

Investment projects have been announced or are ongoing at several airports in the country, and Bucharest's secondary airport is due to open this year.

The Aurel Vlaicu International Airport in Băneasa, the capital's secondary one, is due to become fully operational this spring after refurbishment works that lasted two years. In the long run, the airport is set to reach an annual capacity of about one million passengers, with a focus on business and charter flights.

UPDATE: The Bucharest Airports Company CNAB announced on January 14 that it finalized the last stage of the reception process on the works on the Băneasa – Aurel Vlaicu Airport. It is expected to open for passenger traffic with the beginning of the 2022 summer season. The 2022 summer scheduling season runs from March 28 to October 29.

The Dolj County Council has a RON 400 mln (EUR 80 mln) project for the modernization of Craiova Airport, financed with European funds through the Large Infrastructure Operational Program (LIOP). The upgrade will bring the airport's capacity to 2 million passengers and 18,000 aircraft movements per year.

Meanwhile, the Constanta airport, in eastern Romania, has a EUR 17.2 million investment program, to be completed by 2023. One half of the money already earmarked for investments (EUR 8.5 mln) will go to the upgrade of the runway. A possible new passenger terminal at the airport was under evaluation at the end of last year.

In eastern Romania, the Iași County Council plans to double the Iași Airport's capacity by 2023. The project envisages the expansion of the airport's runway and passenger terminals, the construction of new access roads to ensure the connection of the airport with the city and the surrounding areas.

The works on Brașov-Ghimbav Airport advanced last year towards an expected opening this year, according to Adrian-Ioan Veştea, the president of Brașov County Council, quoted by Mediafax.