Skip to main content
Culture & History
Love in the time of courts: Two men against the Romanian state 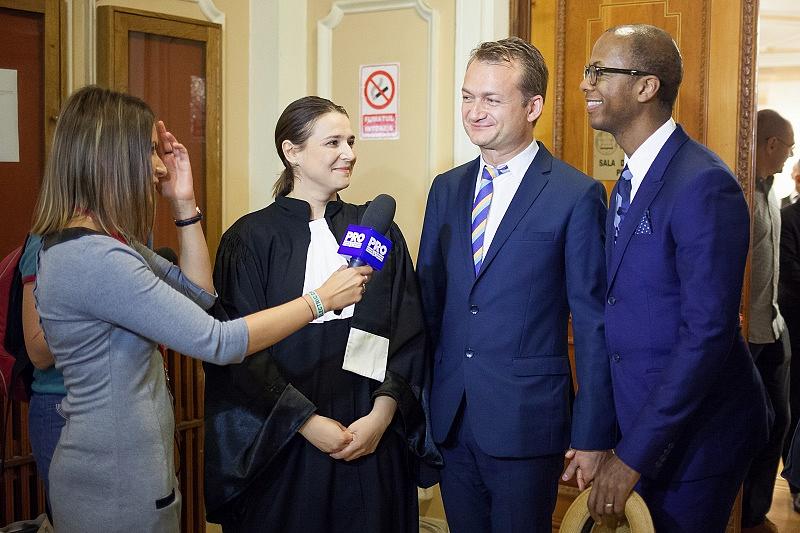 Adrian Coman, a 45-year old Romanian-born married man, who is now living in the US, can come to Romania, go to the city hall and marry again. In an absurd legal twist, it would be perfectly legal.

The two men arrived in Bucharest on Monday, July 18, after a ten-hour flight from New York. They were a bit tired, and cautiously optimistic.

Four years before, in 2012, Adrian Coman thought about moving back to Romania, the country he left when he was 30. He wanted to return with his husband, Clay Hamilton. They had met in the Central Park in 2002 and fallen in love.

On Tuesday, Adrian and Clay held a press conference in Bucharest. The weather in Romania was terribly hot. Adrian had a grey suit on, with a coloured tie whereas Clay was wearing a beige costume with a matching tie. Adrian was used to talking in front of  cameras, even about private things such as his sexuality. But this time the stake was higher. His parents were also there, next to him.

On Wednesday morning, Adrian Coman went to the Romanian Constitutional Court. His lawyer Iustina Ionescu spoke first. Adrian was then given permission to talk.

“I just had twenty seconds and I basically said that I hope they will take the International Human Rights Law into account in their decision,” Adrian recalls.

At 4pm that day, the Chief Justice of the Constitutional Court Valer Dorneanu gave a statement in the media and said that they couldn’t make a decision then. They would continue deliberations two months later, on September 20th.

A letter from the Romanian Government

When the popular revolt of 1989 started in Romania, Adrian was in the military. He was 18.

The experience was frightening. He was in the town of Ramnicu Sarat, and there were shootings in the streets. But there was a positive side to it.

“I didn’t see that on TV. I was not passive in all that. I was a little part of what happened. And I felt that the change to democracy was really worth it,” he says.

Adrian realised then how important was to get involved and not just wait for things to happen. Hadn’t been for that experience, maybe he wouldn’t be in front of the Constitutional Court fighting for human rights almost 30 years laters.

In 2012, Adrian and his husband Clay were trying to see where in this world they could go to be together and have a life. Adrian was unemployed in Brussels, after working there for several years, and Clay was in New York.

They had three places in mind: Belgium, the US and Romania.

Back in 2010, Belgium was the only place where they could get married. At the time, New York did not yet have a law allowing same-sex marriage.

Now, Romania was a cheaper option, and besides that, it was the place where Adrian’s family was living. They decided to give it a try.

Adrian wrote a letter to the General Inspectorate for Immigration asking how Clay could get residence for Romania. He was entitled to it under the EU law; they were recognized as a family in Belgium.

But the Romanian authorities said it was not possible for Clay to get a permanent residence right due to an article in the Civil Code that prohibits non only same-sex marriages in Romania but also the recognition of same-sex marriages performed abroad.

“Once we received that letter from the Romanian government in January 2013, we knew that Romania was not an option. You take it personally, because how often do you get something like that? A government official to write you and basically say [...] you’re not married.”

Then he adds: “I want to highlight to you that our case was not about marriage,” says Adrian.

“Our case was about Clay’s residence in Romania. It is the Government that made it about marriage.”

Clay is not an activist, Adrian explains.  “Here’s how I am different from him. I worked in Romania for many years in social change. I came to the US, I studied human rights, I got an undergraduate degree, then a master's degree. I knew lawyers in Romania. I knew this was unjust, it was illegal under EU law, and I knew the context to take action.”

The long process of self-acceptance

Adrian Coman spoke first at the press conference on July 19.

“At 16 I realized that I was gay. I did not know that word then. It was basically a romantic dimension where I rather imagined myself. It was the Communist Romania in which there was no information about homosexuality.”

While he’s talking, his father is taking some notes and his mother is playing with her hair. It’s also a way to avoid looking into the cameras.

“The self-acceptance took a very long time. There were years when I haven’t talked to anybody.”

His father keeps writing, while his mom looks at her hands.

“It was very useful that I had a scholarship in Madrid when I was 24. At that time I was a teacher of chemistry and physics at a school in Targoviste. In Madrid I met for the first time other gay people.”

Clay sits next to Adrian, and a woman is translating for him. He wasn’t born in a very open environment himself. Texas is a conservative state, and Clay did not fit in the macho black latino-type image. But he had a very close family and friends, by whom he felt protected and where he could be himself.

Adrian goes on with his story. After Madrid, he started working for several human rights organisations. The last one was the LGBT rights organisation ACCEPT. At the time, ACCEPT was trying to repel the article 200 from the Romanian Penal Code that criminalized homosexual relationships. The article had been introduced in 1968, under the communist regime, and stayed in force until it was repealed in 2001, six years before Romania joined the European Union.

He then tells how he immigrated to the US in 2002. He went to New York and the same year he met Clay.

“I remember the date. June 8, 2002. We lived there until 2009. It was the first time I had a long-standing, stable relationship based on love, respect and mutual support.”

From court to court

Romania’s new Civil Code, which was introduced in 2011, prohibited the recognition of different types of families that are legally formed abroad, explains Iustina Ionescu, human rights lawyer and ACCEPT member.

The lawsuit launched by Adrian Coman started at the District 5 Court. If you live abroad that’s where you need to go for a trial.

The case went to the Main Bucharest Court, which said that the District 5 Court was actually competent to hear the case

The case went to the Court of Appeal, which also said that the District 5 Court was qualified to hear it.

The District 5 Court, after hearing the parties, asked the Constitutional Court about whether the article from the Penal Code, which forbids the recognition of marriages concluded abroad, is constitutional.

“Whether Romania recognizes certain rights, that’s what this litigation is about,” says Adrian.

First of all, they can’t move to Romania as a family. So during these trips they take to Romania, once they cross the border, they are no longer married. The implications are big and not only if they reside there.

“If [my husband, e.n] becomes sick and needs to the emergency room, who am I for the Romanian doctor? Nobody. They would have had to call his relatives in to do something,” Adrian says.

The mother, the father, the love

After Adrian, it’s his mother’s turn to speak at the press conference.

“Good morning, I am Camelia Coman, the mother of the children over here. Clay has also become my child, without any problem.”

She smiles. Adrian looks at her, also smiling.

“It’s very hard to me as a mother to listen to feelings, experiences that have succeeded over years, especially because I had no information, however small, particularly before, about the particular situations my child was in.”

Her voice is now trembling.

“I haven’t found out from the beginning, because he didn’t define for himself what it meant, what he felt.”

Then she adds: “As a mother you need to protect your child when he’s small, and understand him when he’s an adult.”

Camelia then talks about one of her visits to the US, when she helped them move from a rented apartment to their own place.

“I got involved with all my heart, even painting or lacquering the floor, although I hadn’t done something like that not even in my own apartment. But I did this because I saw that they loved and respected  each other. I wanted to be close to them as much as I could. But you see, this normality was taking place far from my home, far from me.”

The woman is speaking in front of cameras and TV reporters, driven by her love and courage. In a country where homosexuality is still a taboo, it may be that Camelia Coman is the first mother who publicly stands up for her gay son.

“I ask myself what chances do these children have to have their family and marriage recognized in Romania so that they can be close to me and help me?”

Adrian’s father Liviu Coman speaks next. He has been taking notes and scribbling while the others were taking.

“Good morning to you all.

For me it is the first time when I’m in front of so many people on this topic.

I am Adrian’s father.”

“I am Adrian’s father, and by marriage, I’ve also become Clay’s dad.”

Liviu talks about how he found out that his son was gay. Years ago, one of his work colleagues told him that he saw Adrian in a TV show where he represented the interests of the gay community.

The father wasn’t ready to take the information in, so a long process of doubt and acceptance followed.

The things were “relatively complicated” until he decided to ask Adrian, or Relu, as he calls him, two things.

“Are you happy? Can you love?”

Adrian guaranteed his father that he was happy.

“I then managed to move away from the many questions that arise in such situations, and I simplified that happiness, support, spiritual union (..) are much more valuable to a person than definitions and explanations,” Liviu says.

“That’s why I am here to express my joy than I am near him. (...) But even if they have their own house, the pain remains, to know that your child, your children are not protected by the Romanian state,” the man adds.

Back to the court

Earlier this year, several NGOs, backed by the Romanian Orthodox Church, convinced 3 million people to sign and ask for a referendum to change the Constitution and define family as made of a woman and a man.

On September 20, the Constitutional Court met again to rule on the case of Adrian Coman and Clay Hamilton. The judges postponed the decision again, and the court is due to meet on October 27.