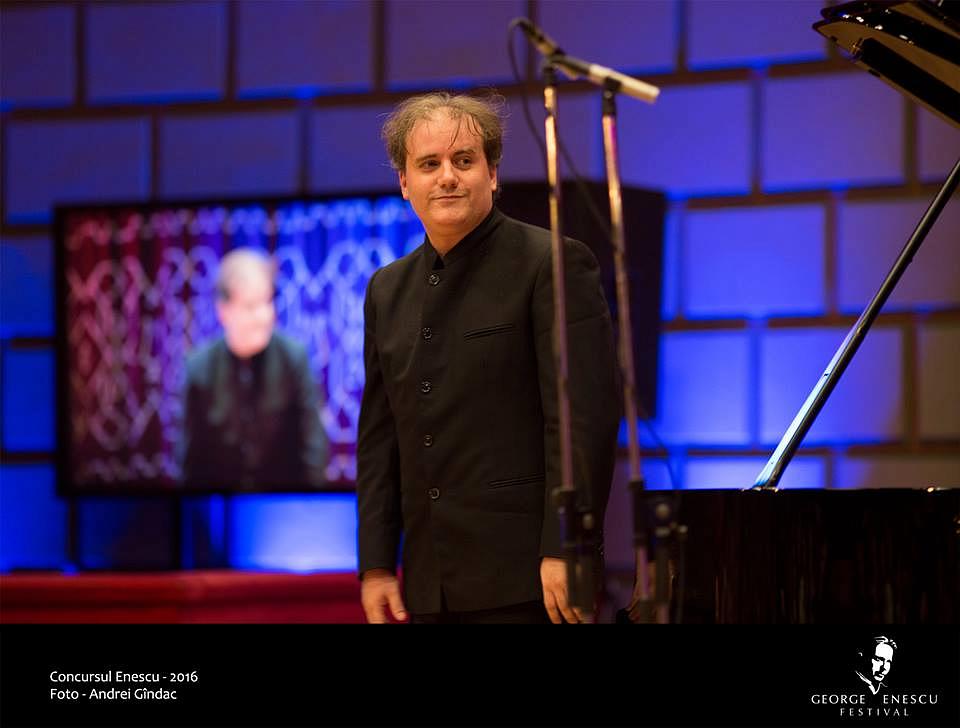 With the third part of the recordings of the complete piano works by George Enescu released this September, musician Josu de Solaun calls the process a “work of love.”

Next year the pianist will have lived in the US for more years than in his native Spain, and has been performing in the country more often since winning the Enescu Competition in 2014. His first encounter with the music of the Romanian composer and what wining the competition meant in the interview bellow.

How was the experience of the 2014 competition?

It was the last competition that I ever did and that I will ever do. It came at a moment in my life when I was very doubtful about my life in music. I had suffered some setbacks, some rejections, some difficult times and I almost tried it as a last attempt to be able to be afforded more opportunities to perform. It was also an opportunity to play at the Athenaeum, which was a dream I always had; I had known about it, read about it, and seen it in pictures. And of course, an opportunity to visit the home country of Enescu. I had never visited Romania before, now I have come almost 15 or 20 times. So it was a very personal experience for me, and also a professional one. I had been trying to challenge myself and, eventually, when I won, it was a great encouragement to continue and I was very happy that this country received me so warmly.

You have just released the third part of the complete piano works by Enescu. How did the process of recording them go? Were there any challenges to it?

I think the biggest challenge in his music, more than to play it of course, is to understand it. Because it is multi-layered, dense, it is very, very polyphonic, like his mind. His mind was working at a very rich level of intensity, full of the most specific nuances; the phrase structure, the infinite varieties of articulation, of dynamics, of character, the incredible genius and creativity as regards to musical form makes it difficult to memorize and difficult to play eloquently because it is difficult to know when phrases start, when phrases end. So for me that was one of the challenges, to actually understand the music.

Once I understood it I think playing it was hard but not as difficult. But to actually decipher, that’s really the word, decipher, the scores was an incredible work of love, really; many sleepless nights, until the high hours of the night, trying to understand, without the piano, I worked a lot without the instrument, to just analyze the scores and understand them.

But you are happy with the result…

You previously said that “Enescu changed me completely as a person, he is the pinnacle of creativity.” How did you discover him?

I discovered Enescu when I was exactly 19 years old. The first piece I heard by him was the Cantabile et presto for flute, which is actually not very representative. It is a piece he wrote like a morceau de concours [a competition piece] for the conservatoire. But later I discovered the Octet, the third violin sonata, which I’ve played, the piano sonata - I heard Radu Lupu play it in New York once and I was quite astonished, both at his playing and the incredible music. Later I heard the symphonies, and the chamber music and little by little I became absolutely enthralled with his music. Years later I decided to enter the competition but my love affair with his music dates from much before the competition.

You started studying in New York when you were 17. What attracted you to the city?

I went to an American school all my life. I had a bilingual education so I was very acquainted with American culture, I had visited the US a couple of times before and I loved New York. I always loved New York in its movies. I was a big Woody Allen fan, I loved the poetry of many New York poets, like Allen Ginsberg or Edna St. Vincent Millay, Marianne Moore, even [W.H.] Auden who was not American, but lived in New York. It was always in my mind a city of artists, of poets, of musicians, of weird, strange, good people, crazy, good people. And I’ve always seen myself as a little crazy but also a good person so I thought I want to be there, in a city surrounded by other crazy, good people. So that was one reason.

The other reason was that there was a teacher I wanted to study with, a Russian teacher who was a student of [Heinrich Gustavovich] Neuhaus, the great Russian piano teacher. I had read a book that Neuhaus had written, so I thought I want to go to New York and study with a student of this person. It was a mixture of personal fantasies and professional dreams.

You teach now at S. Houston State University. What draws you to the profession?

I love sharing with others my journey and my passion for music. It was always a sort of a vocation in my life. Some way or another I always found myself teaching because I find it’s really the best way to learn. In fact there is an American regionalism, a jargon that says “That will learn you”, it means “that will teach you” as if teaching and learning are interweaved in this feedback loop, they feed each other. So I don’t think one can learn completely until one can teach. I have a class of six pianists there, one of them Romanian, from Bucharest, Ana Nedelcu, and some from Spain, from Korea, from Ukraine; I love my teaching life very, very much. I could not live without it.

You spoke of the need to quiet the inner critic. How do you go about that?

It’s hard. You have to try to look for beauty, for truth, or for values and of course, we, humans, are very limited. You have to try your best, work really hard, and not let the critical voice take too much power. Sufficient but not too much because in small doses it can really help but in big doses it can destroy. Because that critical voice actually comes with a sort of “inverted narcissism.” It’s almost like you are critical because you want others to compliment you. And so criticism is only good when it is directed towards the striving for a very honorable value, like crafting a beautiful performance. But of course it is very difficult and one can only try. And every time I’m given the opportunity to try again, I try again.

What other recording projects or performances you have at the moment?

I have two beautiful recordings with the other two winners of my year, Stefan [Tarara] and Eun-Sun [Hong]. We’re doing a recording of five Haydn piano trios and we’re doing a recording with some Enescu chamber music: the Trio in A minor, which is only recently published and I think it has been recorded once by Viniciu Moroianu and also the first Piano Quartet, which is a very interesting piece, with a very beautiful, quite amazing slow movement. So that’s two recordings.

I’m also recording next year the complete Goyescas by [Enrique] Granados, a Spanish composer. And there is also the project of recording and performing, although that’s more in the long-term, but still, the piano concerto of Paul Constantinescu and also his triple concerto for violin, cello, piano and orchestra which I will play with Stefan and Eun Sun.

I have lots of performances in America, where I live, I play in Huston. I also play in France in January, in Spain and in Romania I play with a lot of the Romanian orchestras: with the Ploiești Philarmonic, Iași, Cluj, Târgu Mureș, and Satu Mare.

Josu De Solaun is a graduate of the Manhattan School of Music, where his two main teachers and main musical influences have been pianists Nina Svetlanova and Horacio Gutierrez. In Spain, where he studied until the age of 17, his main teachers were Ricardo Roca, Ana Guijarro, and specially, Maria Teresa Naranjo.

You can find his CDs at the Humanitas Kretzulescu bookstore in Bucharest or online.