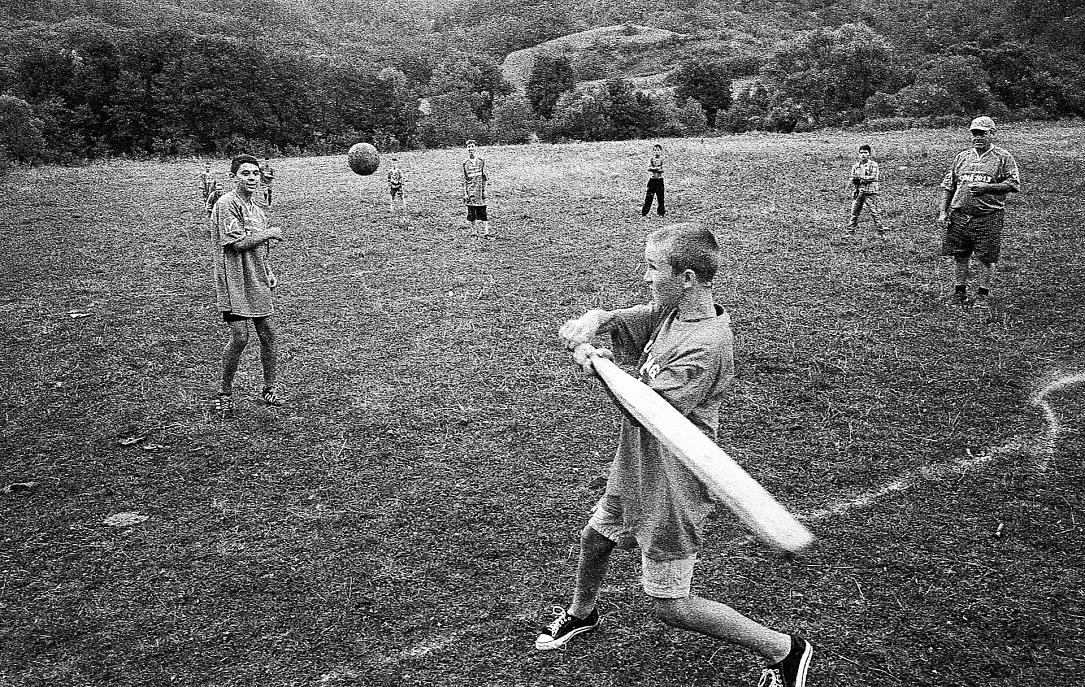 Despite a long history, Romania’s national stick and ball game oina, similar to the American baseball, is almost forgotten and only kept alive by a handful of amateur players.

Not any kind of amateurs, though; fierce, madly passionate players. This is what Romanian photographers Sorin Vidis and Bogdan Baghitoi discovered when they started documenting oina in 2014, when it officially became the country’s national sport.

Back then, the state attempted to revive the old tradition and promote oina in Romania’s schools and public space. The game also has a national federation representing its interests. But the sport lacks sponsorships. Those who still play it also fund it.

First documented in the 14th century, the oina is now almost entirely forgotten. According to some, oina is the precursor of baseball, brought to the US by Romanians from Transylvania who emigrated there.

When Sorin Vidis and Bogdan Baghitoi decided to document this rather obscure sport, they did not have any grants or sponsorships lined up, just their personal savings.

Sorin was an engineer working for a construction company, while Bogdan, with a PhD in philosophy, was working in research. Both men liked their jobs, but what they really dug was documentary photography, that intellectual, under-sponsored Cinderella of photography.

None of them had played oina in childhood, nor as teenagers, but there was a strong hook there. For three years, they documented Romania’s national sports and now the duo wants to publish a photography book about it. They have started a crowdfunding campaign to help them fund it.

A mixed team of US and Romanian soldiers at the Mihail Kogalniceanu (MK) base in South Eastern Romania faced border police’s oina team Tomis Constanta in a competition of oina. Baseball and oina met on that field in 2007. The Romanian is “similar to, although not as popular as our American baseball”, according to a Joint Task Force East presentation video.

Oina consists of two teams of 11 players, one attacking side or "at bat" ("la bataie") and one defending side or "at catch" ("la prindere"), whose roles switch at half time.

Most of the oina teams in Romania have survived in villages. The official website of the National Oina Federation lists 25 official oina sports clubs in Romania. But many informal teams are made up ad hoc, and they consist of members of very different ages, from teenagers to people over 50.

“Sometimes in the field you have both the son and the father,” says Bogdan Baghitoi. As players grow old, they may lose some of their physical force, but they gain in tactical experience, and oina is a highly tactical sport, the photographer explains.

Oina became compulsory in Romanian schools in 1897 at the initiative of Spiru Haret, then Minister of Education. Three years before, he had created a committee to unify the techniques of the game and establish the first official rules. The initiative of Spiru Haret came at a time when Romania was a very young country, lacking Transylvania, then part of the the Austrian-Hungarian empire, and nationalism was a strong narrative. Oina was practiced in all the regions of the country and was considered a purely Romanian sport.

The game was so popular those days that even made it to literature. The famous Romanian writer I.L. Caragiale wrote that in his hometown of Ploiesti the referendum of 1866 on Prince Karl Ludwig of Hohenzollern-Sigmaringen becoming ruling prince in Romania couldn’t take place because the electorate preferred to go to an oina game. 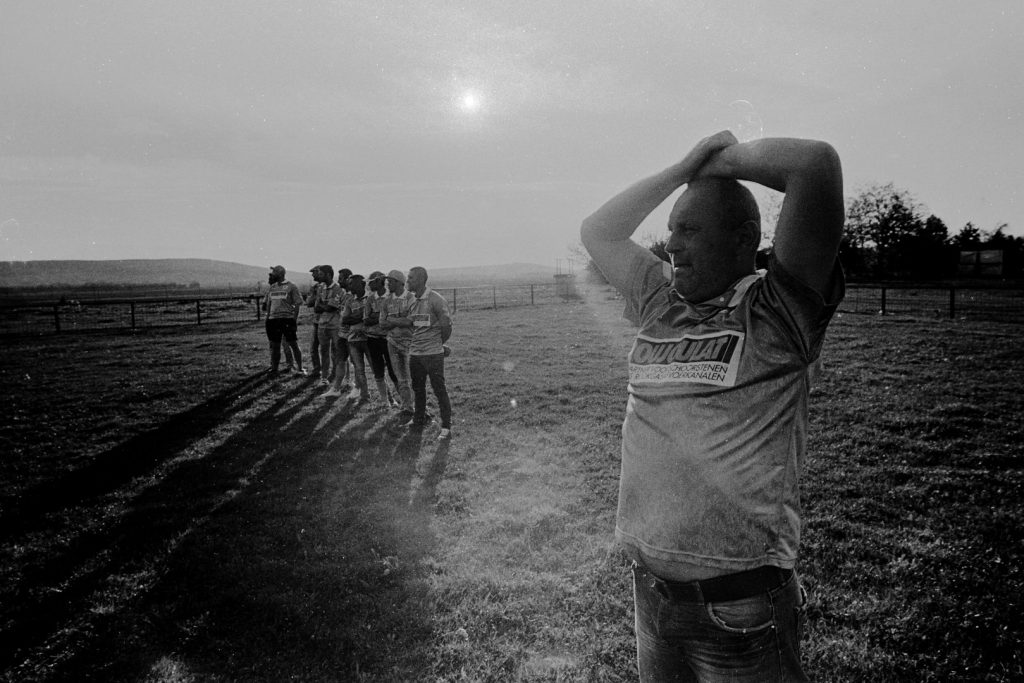 During Communism, Romania had several oina clubs running under the patronage of state institutions, such as the army, police, or big factories. Nowadays, some of the remaining senior oina clubs are formed from border police members (the team Tomis Constanta) or gendarmes (Straja Bucuresti).

Sorin Vidis and Bogdan Baghitoi first documented the oina team of Straja Bucuresti, the Romanian Gendarmerie's team, joining them for a few competitions across the country in 2014.

Bogdan then moved to Romania’s eastern region of Moldova for three months in 2014, following the activity of the teams in the area, whereas Sorin focused on the south of the country. The two men then made a tour in the north of Romania, covering the oina centers of Maramures, Salaj, Cluj and Sibiu.

Cynicism is not exactly the word used by Sorin Vidis to describe his worldview a few years ago, but it may well do.

The man, drinking an espresso in a Bucharest cafe in December 2016, says that he used to see life very differently before embarking on the oina project.

“I no longer believed in good people and pure things until we started this whole oina thing. It’s a thing that sustains from nothing, only from passion, from pure and real feelings. It was such a surprise,” the photographer explains. 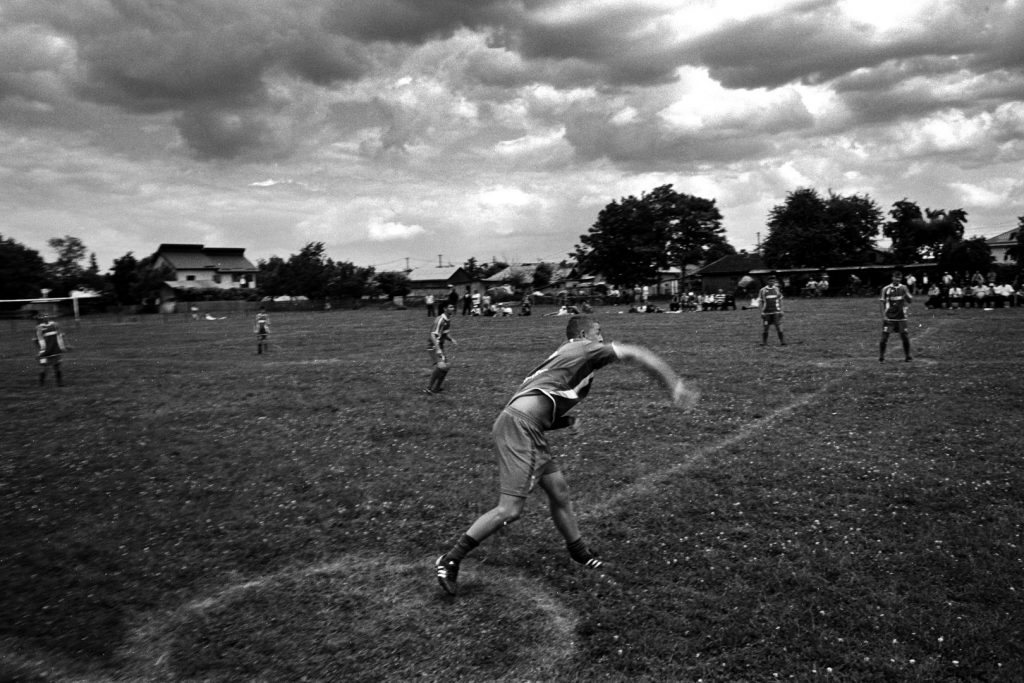 He remembers meeting an oina player and trainer called Dan Aluas, who lives in the village of Voivodeni, at the border between the Cluj and Salaj counties, in northwest Romania. Sorin was impressed by his dedication, and described him as a “good man”.  Some of the trainers, like Aluas, buy shoes, t-shirts and equipment for kids or they pay for the gas when they go to competitions in other villages or cities... All is pro bono, and just because they love the sport.

After the ‘90s, oina became marginal. It's a wonder it has not disappeared altogether, says Bogdan. “Probably the most important factor was the lack of money. (...) During the transition, oina was kept alive only by the obstinacy of a network of passionates who wanted to practice this sport, and those who were trainers taught kids too,” the photographer explained.

Sorin and Bogan became so absorbed by the game that during some matches they would forget to take pictures. The oina players were reluctant at first: why were these two men interested in documenting this sport, when nobody really paid attention to it? But after they got to know Sorin and Bogdan, things changed. The oina players would invite the photographers to have a glass of palinca (the traditional Romanian brandy) with them and would give them advice.

The two photographers have taken more than 2,000 pictures since they’ve started documenting Romania’s national sport. The project didn’t bring them money, nor fame. But it did teach them about passion and joy.