Skip to main content
Nature
Nature in Făgăraș Mountains: The chamois in Romania 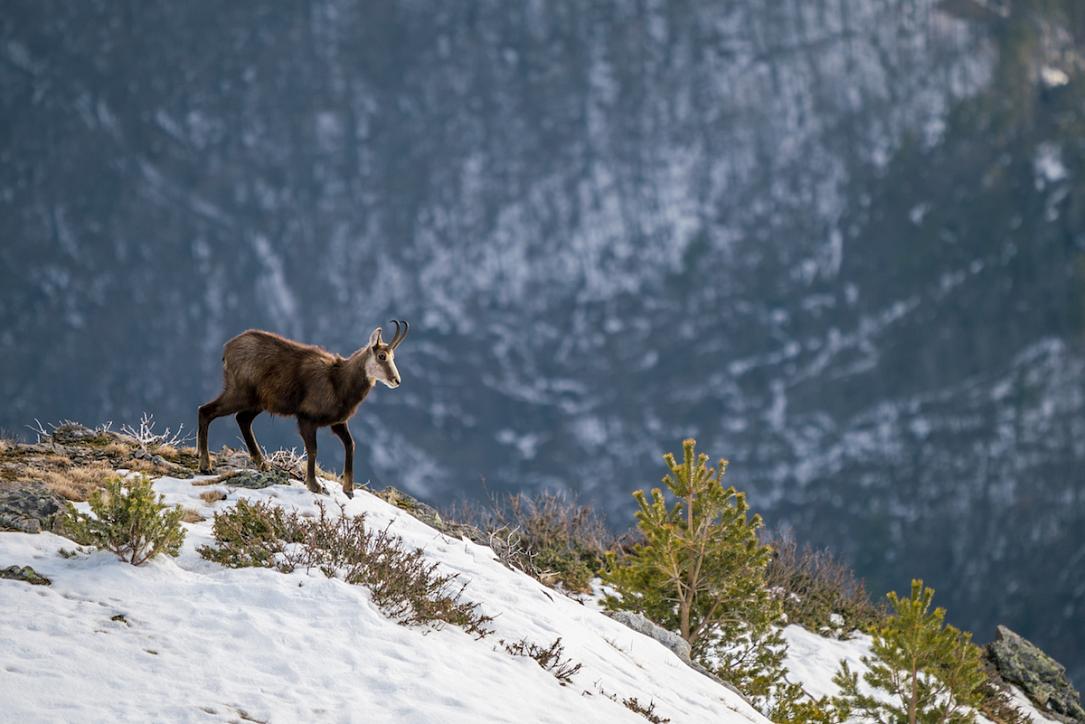 The chamois are some of the few wild animals living in Romania that tourists hiking in certain areas of the Carpathian Mountains can spot quite easily. And that’s quite a view! However, the chamois population faces various threats, such as hunting and poaching, which seriously affect their number.

The chamois (Rupicapra rupicapra) is a species of goat-antelope, being the only mountain goat living in Romania, and in Europe. The subspecies found in the Carpathian Mountains is called the Carpathian chamois (R. r. carpatica).

They inhabit steep, rocky areas in the mountains. In Romania, these animals live in the Carpathian Mountains, in areas such as Piatra Craiului National Park or Bucegi, Fagaras and Retezat mountains. Elsewhere in Europe, they can be found in the European Alps, the Pyrenees, the Tatra Mountains, the Balkans, the Caucasus, northern Spain, as well as parts of Turkey, Greece and Bulgaria.

A fully-grown chamois reaches a height of 70-80 cm, with males weighing 30-60 kg and females 25-45 kg. They have short horns that curve backwards and a thick fur that turns from a deep brown color in the summer to a light grey color in winter. The chamois also have white contrasting marks on the sides of the head with pronounced black stripes below the eyes, a white rump and a black stripe along the back.

The female chamois and their young live in herds of 20-30 individuals while the males live solitary for most of the year. In early autumn, the males start searching for these herds, and when they find one they fight with other males for dominance. The mating season usually takes place between the second part of November and early December, with the babies being born between the end of May and early June. A female chamois usually has one baby and, if she is killed, other females in the herd may try to raise the young.

The chamois feed on grasses, herbs, leaves of trees, buds, shoots, and fungi. They usually spend their time grazing on the alpine meadows, eating leaves from the shrubs and bushes. In fact, among the biggest threats for the chamois are the oversized sheep flocks, which in summer tend to disturb chamois causing them to be more dispersed. Moreover, in some areas, high densities of these domestic sheep create intense grazing pressure. A solution to this problem would be to find a good balance between keeping enough places for the chamois where they can stay, and at the same time make sure the number of sheep respect the law so that the sheep don’t leave the chamois with no grass to eat.

Poaching and over-hunting are also serious problems for the chamois in Romania, affecting their population in some areas. Hunting chamois is a big thing in Romania, as the Carpathian chamois have larger horns than those in the Alps, for example, and this means bigger trophies the hunters.

However, the main problem is not the hunting itself, because the species can withstand a certain amount of hunting, but that hunters overestimate the number of chamois, on purpose, in order to get higher quotas. In some parts of the Carpathian Mountains, the number of chamois went down a lot. This can also be observed when one looks at the population of chamois in national parks, where hunting is not allowed, in comparison with other areas outside the parks. It can easily be observed that the population of chamois living inside natural parks is much bigger than the one living in areas outside those parks.

Add poaching to this, and the human pressure becomes an obvious threat to the chamois population. A solution could come from the government, and would imply a real monitoring of the chamois, and even the introduction of a ban on hunting in some areas where their number dropped significantly.

When it comes to their natural predators, the chamois have developed a predator-avoidance strategy that is quite effective: they go into steep, rocky areas where the wolves for example can’t follow them. Unlike their predators, they can “glue” themselves onto the rocks, climbing really steep areas. However, they become easy prey when they go down into the forest, where the lynx or wolves can outrun and catch them. Golden eagles also hunt baby chamois, and sometimes they even go after the adults. However, this happens quite rarely.