Bucharest Centennial: Mioriţa Fountain, one of the emblematic monuments of Bucharest 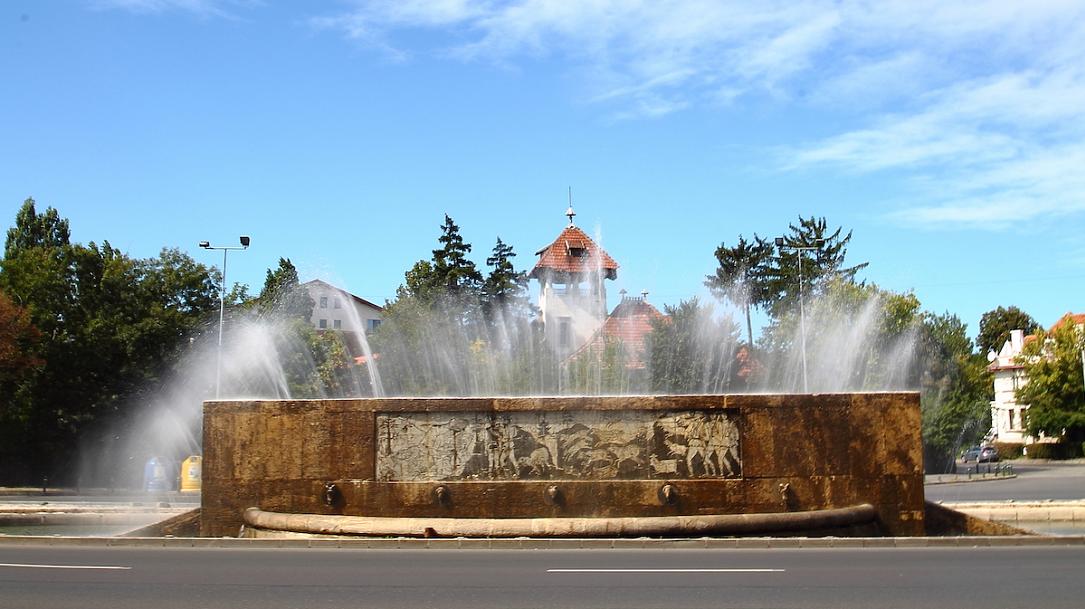 The story of Mioriţa Fountain connects several historical periods in the focus on the local and national identity.

Located in front of the Dr. Nicolae Minovici Folk Art Museum, in the capital’s northern area, the monument was designed by architect Octav Doicescu and was inaugurated in 1936. At the time, the fountain marked the north entrance into the capital, and was interpreted as a welcome sign to those arriving in the city through the symbolism associated with water. Today, Bucharest has expanded further towards the north, and the fountain no longer marks a gateway to the city. It remains nonetheless one of the capital’s most valuable monuments.

The fountain was inaugurated during an event called Bucharest’s Month. Bucharest had already become the capital of Great Romania, following the Great Union of 1918, and the effects of the economic crisis of 1929 had passed, with the overall context being one of economic prosperity. The local authorities were looking to attract more tourists to the capital. As such, in 1934, at the Congress of the Union of Cities in Romania, Al.G. Donescu, then the capital’s mayor, proposed an event that would attract “plenty of foreign visitors, especially national ones.” A year later, in 1935, the first edition of the event was organized. It took place in Carol Park and had an extensive program, including an urbanism exhibition, contests, book days, and many performances. Architect Doicescu designed for this edition the Zodiac Fountain, located in the park.

The following edition, in 1936, had an international dimension, through the Pavilion of the Little Entente, which included Czechoslovakia, Yugoslavia and Romania. Organized on the shore of the Herăstrău lake, the exhibition included several new constructions, among them the Cultural Pavilion, the Municipal Pavilion and the Royal Pavilion. According to an agreement between the Little Entente countries, Bucharest was to be invited to similar events: Belgrade’s Month and Prague’s Month. At the 1936 Bucharest’s Month, the Romanian Village exhibition was also presented. This later became the Village Museum.

The event was organized until 1940, and it never resumed after the Second World War. Still, throughout the period it was organized, it brought with it the inauguration of several urbanism works in the capital, among which the systematization of the area of the Colentina river or the inauguration of the boat rides on Herăstrău lake. It also left behind Mioriţa Fountain, a monument decorated with a mosaic designed by sculptor Milița Petrașcu, depicting scenes from the Miorița ballad.

Miorița is a folkloric poem found in many versions in all regions of Romania. In some areas it can be encountered as a carol, in others as a ballad. The ballad tells the story of three shepherds, two of them planning to kill the third. A sheep (called Miorița) reveals the plan to the third, but, instead of defending himself, he accepts what is planned and tells Miorița how and where he wishes to be buried. At the same time, he asks Miorița to tell everyone that he married “a beautiful princess/ The world’s bride.”

The discovery of the poem, recorded by author Alecu Russo around the middle of the 19thcentury, is set against the background of the period of the Forty-Eighters, when attention was given to the national identity, in line with other national movements across Europe. It was the period of Romanticism, and of the interest in tracing the national origins. The generation of the Forty-Eighters is also associated with the 1848 Revolution, a first moment of asserting the national identity, in a process that peaked with the Great Union of 1918.

Built out of Dobrogea granite, Mioriţa Fountain is made up of a large, ellipse-shaped basin (the large diameter of 50 m, the small one of 20 m). The fountain, placed in the middle of the basin, consists of two parallel walls, 16 m long and over 3 m high. A corrugated, stone slope, 1 m wide, is placed between the two walls. The water sprays from it. The mosaic decorating the monument is made up of pieces of enameled ceramic, made by artist Niculescu Mogoș Gheorghe, in his own workshop, following his own technique.

The three shepherds and their flocks are depicted on one side of the monument, and the wedding of Mioriţa’s owner and his death on the other.

Engineer Dorin Pavel also worked on the monument, on the hydro-technical concept: the fan-shaped water stream and a basin to recover the water. This way, only what evaporated needed to be added back.

Since 2010, Miorița Fountain has been on the List of Historical Monuments of Bucharest.

The fountain will be revamped, according to an announcement of the company in charge with the capital’s water network. The mosaic, equipment and elements of the ensemble will be refurbished.