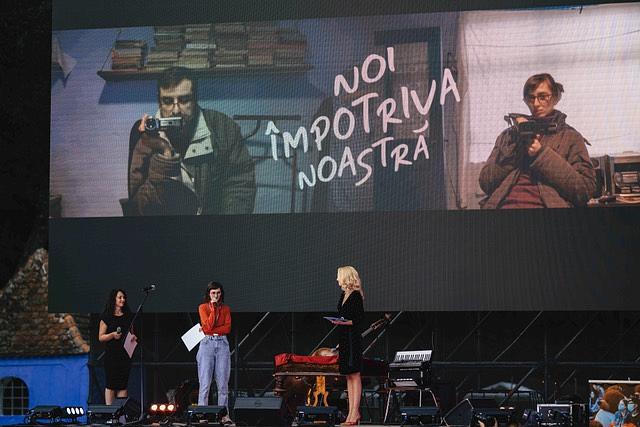 The jury, made up of cultural personalities from Romania and abroad, evaluated 41 films entered in the four competition sections.

Romanian production Us against us, directed by Andra Tarara, was named the Best Film of the Romania Section. The jury took note of "the collaborative work of two filmmakers from different generations, and the communication they achieved, father and daughter, through the medium of film."

The award for Best Director of the Romania Section went to Olga Lucovnicova for the film My Uncle Tudor "for the artistically organic way the director used her camera to explore her childhood memories and her traumatic relationship with her uncle."

The jury also awarded a Special Mention to the film Occasional Spies, directed by Oana Giurgiu "for the original manner in which the director re-enacted an unknown chapter of WWII, blending the personal with the wider historical context."

The best documentary in the New Voices in Documentary Cinema Section was awarded to a production from Burkina Faso - Night Nursery, directed by Moumouni Sanou. The jury noted "a reality portrayed with a lot of honesty, sensibility and compassion – without any obvious interference from the director, nor from the camera. Given this is the New Voices Competition, we felt it's even more appropriate to give the award to a first-time filmmaker, encouraging him to keep thriving in telling unique, compelling stories."

A Special Mention was also given to Frédéric Mainçon's For Your Comfort and Your Safety for the original subject "that has never been tackled before and for the way the film managed to give a voice to the unseen faces guarding our museums."

The award for best documentary of the Central and Eastern Europe Section was given to Martin Páv's Wolves at the Border for the way the director "skillfully crafts a story that explores themes of ecological and environmental change, distrust of outsiders, and how polarized opinions and entrenched perspectives undermine opportunities for understanding and collaboration."

The film Nun of Your Business, directed by Ivana Marinić Kragić, was awarded a Special Mention because it "sheds light on an often-hidden world under forms of apparent normality, such as love between women in convents. She creatively incorporates narrative resources of fiction and animation film into the language of the documentary."