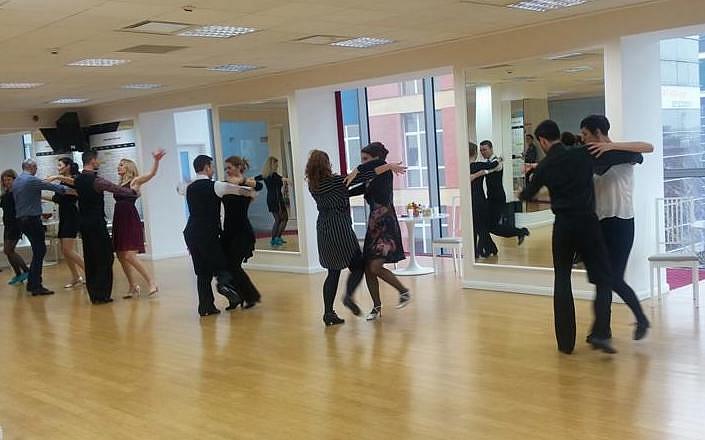 Three years after opening in Bucharest, the local Arthur Murray dance studio is getting ready for a consolidation year and ponders adding a second location.

The school takes its name after founder Arthur Murray, a US ballroom dance instructor and entrepreneur who opened his own dance studio in New York. During the 1930s, the studio offered such dances as the Lambeth Walk and the Big Apple, widely popular at the time. The first franchised Arthur Murray studio was set up in 1938 and in April 2014 Bucharest joined the network of more than 280 studios worldwide.

The idea of a local Arthur Murray studio emerged at an international event of the network. Romanian Lucian Stanila, a dancer himself and the owner of two Arthur Murray franchise studios in the US, invited Cristina Ardelean, the manager of the Bucharest studio and a partner in the franchise, to attend.

“At the time, Lucian Stanila was together with his students from the US in Rome, at an international dance event. He invited us to participate, we were charmed by the atmosphere we saw among students, we saw that they were very passionate about what they were doing. […] We realized something similar was missing in Romania and it would be right to have it,” Cristina Ardelean says.

After the market research phase and looking and the potential clients, the studio opened in the northern part of Bucharest, in an offices area, where many of the students work. “This is exactly our target, the people who enjoy very much and place a lot of value on the time spent dancing,” Ardelean says. The students, usually professionals who want to dedicate some time to themselves, come to the studio for classes at mid-day, during their lunch break, or after work.

The motivations of those who take up a variety of ballroom dancing styles at Arthur Murray range from wanting to reach one’s best shape to socializing or wanting to learn to dance for a specific event, be it a wedding or a company event. “There are many reasons for which people come and dance, so the entire dance program is tailored to the individual need,” Ardelean explains. “Any lesson starts with a discussion with the student to find out what are their reasons for wanting to learn to dance.”

The school currently has approximately 150 students, and out of these 50 to 70 are active ones. The rest are seasonal: they come for a period of time for classes after which they go abroad and later return.

The school works on an approach combining three types of lessons private lessons, group lessons, and party lessons, combining a mix of styles, are the third type.

“It happens very often that those who come to us have never danced before, they are people who only felt they have this passion,” she says. “When you address entry-level students you need this system that allows them to learn in an easy way, in a fun way and in a quite fast way” because, she explains, learning in a stress-free way and keeping time constraints in mind is important to students.

To further help with the learning, the studio organizes various events. Every two weeks students can attend thematic parties, which are set in the studio, with all the active students. They can also test the things they have learned at internal contests, another larger- type event. They can also attend the international events where students from all the Arthur Murray studios worldwide participate. Last year, the Bucharest studio was the host of such one event, for the first time.

The number of students increased gradually since the opening and word of mouth helped as more started seeing the benefits of dancing, the manager explains.  Meanwhile, the revenues grew constantly. The Bucharest studio, which opened with a EUR 200,000 investment, had a EUR 400,000 turnover last year, up 33% compared to 2015.

Until then, the studio has plenty for students to keep busy. “There is always something new to learn in dancing, one choreography will never look like another,” she explains.