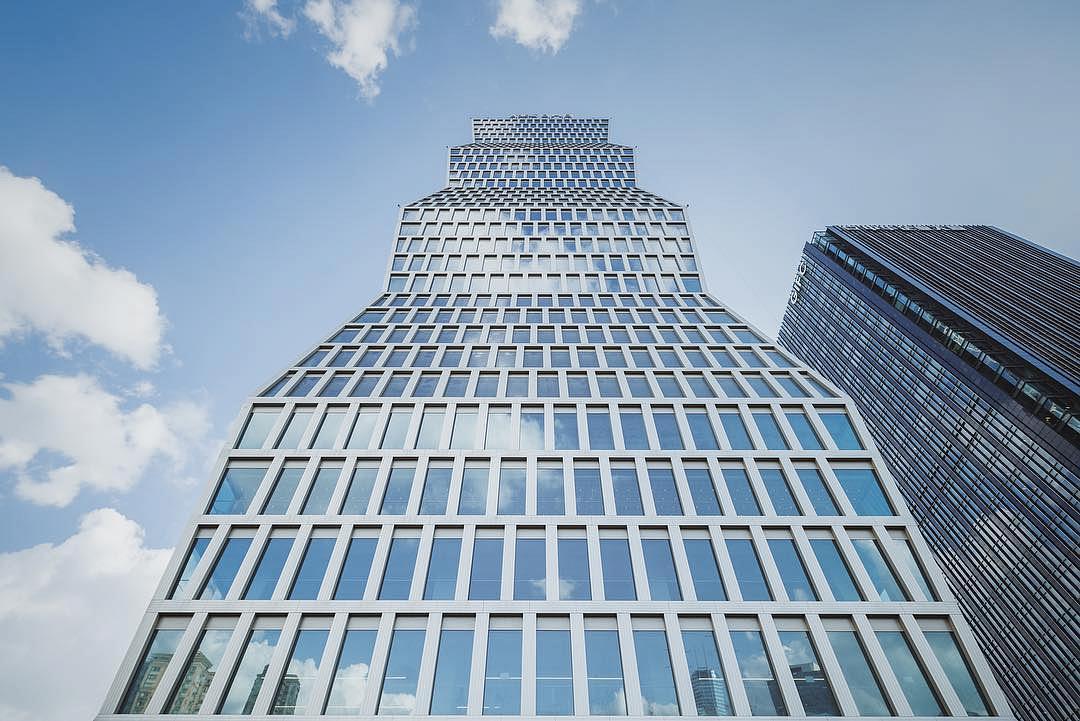 “Inspired by the proportions of Constantin Brâncuși’s ‘Endless Column,’ the tower presents itself as an undulating obelisk featuring a diagonally canted zig-zag profile. Each side of its sculptural form consists of four stacked volumes. A series of shifted grids creates a density of wall surface that shades from the sun, reduces glass glare, and creates a sense of urban solidity,” a description of the edifice in a KPF press release reads.

“Shanghai is full of tall towers, but perhaps few that make such a high priority of sculptural simplicity,” said KPF President James von Klemperer. “In SOHO, we met a client who shared this goal. Founders Zhang Xin and Pan Shiyi pushed us to follow our initial idea all the way to completion. Together, I feel we’ve given the city of Shanghai a giant piece of public art.”

SOHO Gubei consists of a 38-story office tower and a 12-story retail podium with below-grade parking. On the top level, a sky garden offers dining and outdoor spaces to both the building tenants and the general public.

Brâncuși made several versions of The Endless Column. The 1937 one is part of a sculptural ensemble Brâncuși created in Târgu Jiu, in southern Romania, as an homage to the Romanian heroes of the First World War. The ensemble also includes The Table of Silence and The Gate of the Kiss.

Kohn Pedersen Fox Associates (KPF) provides architecture, interior, programming and master planning services for clients in the United States and around the world. The firm’s portfolio spans more than 40 countries and includes projects ranging from office and residential buildings to civic and cultural spaces, and educational facilities.