Romanian film review – In Cinemas / The Revolution of 1989 in Film 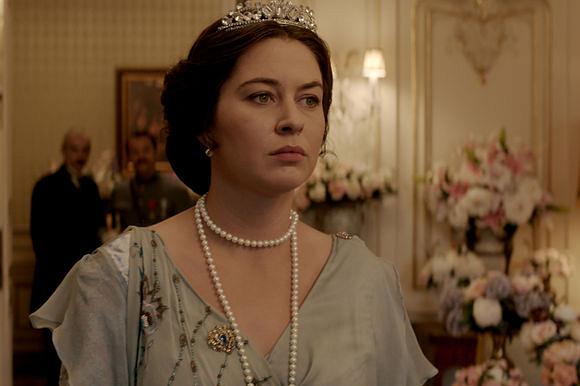 If you have cinema plans these days, there are still a few Romanian films currently showing. If you prefer something more topical, then scroll below for three of the most ingenious takes on the Romanian Revolution of 1989.

Maria, Regina României/Queen Marie of Romania is probably the one title that has been running longest and in most cities since its theatrical release in November. Directed by Alexis Sweet Cahill and with an international cast, the film is a glossy, well-crafted take on a key historical episode. Based on Maria’s diary and testimonies of the period’s politicians, the plot picks up when then Prime Minister I.C. Brătianu fails to lobby for the recognition of Romania’s 1918 Unification at the Paris Peace Conference in 1919. In order to save the situation, the Queen, a passionate supporter of the cause and very devoted to her people, is sent to Paris to give a hand, being well-connected with other crowned heads in Europe and the niece of Queen Victoria. The rest of the film focuses on her trials and victories in the French capital. It’s no spoiler to give away the fact that the Unification received the necessary international support, and the film is adept at showing a woman who learns to make the best use of her position and skills to reach her goal.

Roxana Lupu, a Romanian actress living in London, is a true find as the beautiful and commanding Queen whose presence impresses everyone around her. The rest of the cast fare from equally solid (Daniel Plier as King Ferdinand, Emil Măndănac as Prince Știrbei) to downright cartoonish (Anghel Damian as her rebellious son Carol acting like a tantrum-throwing teenager, but in his defense, he is given a poorly written role to work with). The costumes and recreation of the era’s architecture and interiors are impressive, but the whole lavish look cannot compensate for the conventional, albeit well-intentioned filmmaking (touching upon feminist issues and minority rights), and its reliance on clichés. The sentimental piano tune, panning cameras in panoramic shots, and slow-motion sequences are overused; the dialogue often lacks liveliness; and there are a few repeating tropes that have been done times and again (how about another way to express political concern than brooding, smoking men in dark, lamp-lit rooms?).

As a cinema film, Queen Marie of Romania is a rather stuffy affair and would probably work best as a fine TV production. As a period film, though, it is a welcome entry to a genre that has been under-represented.

In the context of 30 years since the events of 1989, the film is not uninteresting if one were to look at how monarchy, in general, has been perceived in the period following the fall of Communism, and its (at times considerable) popularity. The following three titles are classics that can be recommended at all times, but this year they are particularly timely.

Corneliu Porumboiu has been one of the most consistently excellent younger filmmakers, but it is his 2006 debut that is probably still everyone’s favorite. A fost sau n-a fost/12:08 East of Bucharest is a pitch-perfect comedy about very serious matters. When four men gather in the local TV studio to discuss whether the Revolution also happened in their provincial town, things go awfully (and hilariously) wrong. Saying more would be unfair because this is truly of a film of delightful turns, and Porumboiu’s talent at packing social commentary and philosophical thought in a seemingly breezy form is unsurpassed. Razor-sharp, brilliantly funny, excellently acted and shot, this film has no ounce of fat, and hasn’t aged a bit.

Also a film with comic elements, but one that hits much harder is Radu Muntean’s Hârtia va fi albastră/The Paper Will Be Blue (also from 2006). Co-written with Răzvan Georgescu and Alexandru Baciu (the excellent writing trio who are also responsible for the very good One Floor Below and Tuesday, after Christmas), this is the story of a young militian who leaves his platoon to join the revolutionary movement on the night of 22nd of December and the ensuing search party, brilliantly staged by Muntean.

A more theoretical take on the Romanian Revolution is Harun Farocki's documentary Videogramme einer Revolution/Videograms of a Revolution (1992). The German filmmaker dissects the images of the Revolution broadcast on TV, by now part of the collective memory, analyses them one by one in an attempt to establish a chronology of the 'actual' events which took place and forces the audience to re-think what one saw back then. This is cerebral, demanding watching, and a true revelation.

Amazon and Cărturești hold DVDs of the three older films, and for Queen Marie of Romania’s screening times and venues, check out Cinemagia.ro.