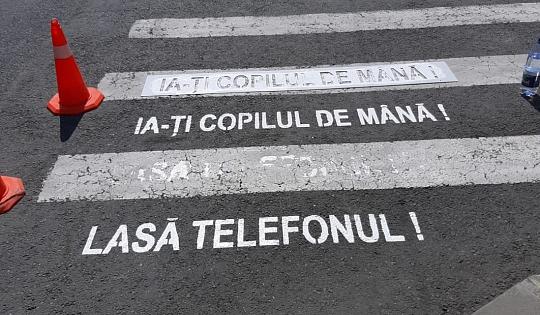 Preventive messages such as “Take your child by the hand,” “Don’t run,” or “Stop looking at the phone” have been written on several pedestrian crossings in the city of Focsani, in Vrancea county, in an attempt to make the city’s roads safer for both pedestrians and drivers, local Mediafax reported.

The action is the result of collaboration between the Vrancea County Police Inspectorate, the City Hall of Focsani and the civil society, according to a press release from the Vrancea Police. The authorities will continue to write preventive messages on pedestrian crossings near schools and in crowded areas all summer, until the new school year starts.

According to statistics presented by the Vrancea Police, there have been two accidents on pedestrian crossings in Focsani in the first six months of the year, which resulted in the serious injury of two people. When it comes to illegal street crossings, four accidents were registered in the first six months, and four people were seriously injured.