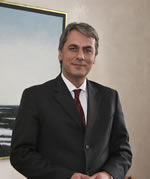 Marinos Stratopoulos could become the new general manager of Banca Romaneasca, the local subsidiary of the National Bank of Greece, according to a report by Romanian newspaper Ziarul Financiar. Stratopoulos has been running the lender's operations in Serbia for the last four years.

Stratopoulos should start his mandate in Romania in May, but he needs the Romanian Central Bank approval to do so. This would not be his first job in Romania. In 2001, Stratopoulos was appointed by Egnatia Bank Romania as the general manager and president of the board of administrators until 2004. In January 2005 he was elected deputy general manager of Egnatia Bank responsible for the corporate department of the bank and several subsidiaries, among which the ones in Romania.