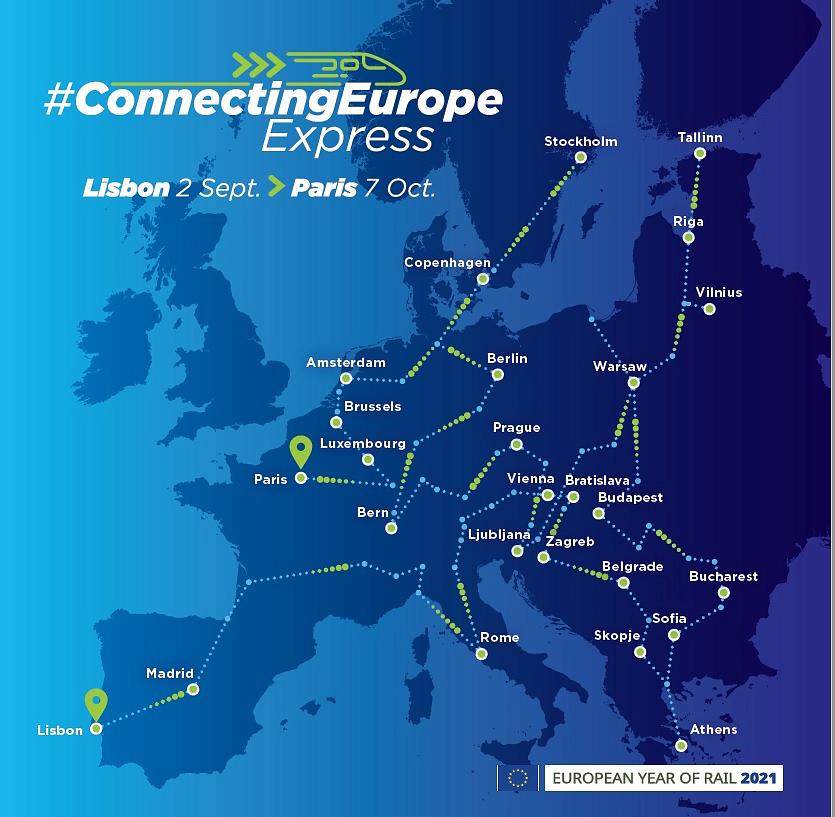 The Connecting Europe Express, a train traveling across the EU to promote the benefits of rail during the European Year of Rail 2021, will arrive in Bucharest on September 18, after entering the country at the Ruse-Giurgiu border point.

The route of the train, announced on Europe Day, starts on September 2 in Lisbon and ends in Paris on October 7. The train will stop in more than 40 cities in 26 countries, and link the Portuguese, Slovenian and French Presidencies of the Council of the EU.

After stopping in Bucharest, the train will reach Brașov, Sibiu, Oradea, Arad, and exit the country on September 19.

The route of the train is available below.

At each of the stops, events and other activities adapted to local Covid-19 measures will highlight the role rail plays in society and the challenges that rail must still overcome to attract more passengers and freight, the project organizers said.

The Connecting Europe Express will include three different trains that fit the different gauges used in Europe, reminding the lack of interoperability between some parts of Europe’s rail network. The train running on the standard gauge will have six coaches. Two will host mobile exhibitions on the technologies and innovations already improving the rail experience and on how the EU supports infrastructure projects. A separate train will run on the Iberian gauge in Portugal and Spain, and a third one on the Baltic gauge in Estonia, Latvia, and Lithuania. Both trains will meet with the standard gauge train along the route.

“Crisscrossing the continent, from Lisbon to Bucharest and from Berlin to Paris, the Connecting Europe Express will follow routes that bind us together – whether as countries, businesses or people. While a symbol for connectivity, this train also serves as a reminder that we still have a long way to go and much work to do before rail becomes the transport option of choice for Europeans,” Transport Commissioner Adina Vălean said.