Skip to main content
Daily News
Bucharest in one day: Casa Capsa on Calea Victoriei – the core of Bucharest in its glory days 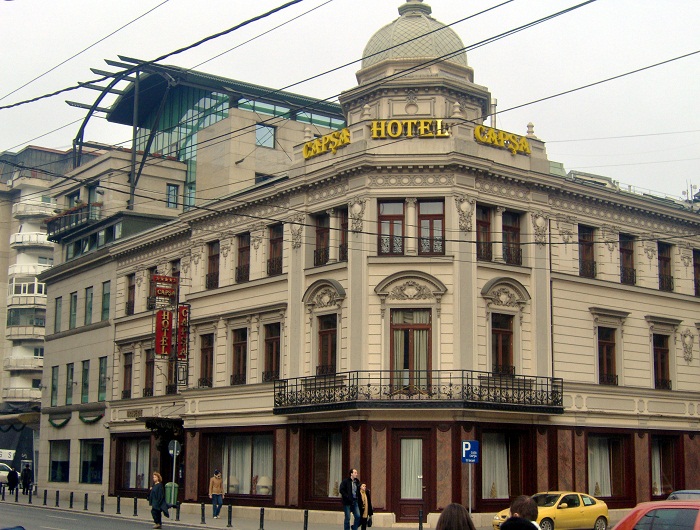 Casa Capsa, standing on a street corner on Calea Victoriei, used to be the core of the political, artistic and high life in Bucharest. It was set up by the Capsa brothers late 1800s, but its rich history dates further behind.

The building with the richest history on Calea Victoriei is Casa Capsa (Capsa House), which “was for 75 years more than a confectionery, hotel or coffee shop, but which was in a way the core of the country and its living chronicle,” as Gheorghe Crutzescu has said.

Let's start with the beginning, as the history of the buildings having stand on the ground is as interesting as Casa Capsa's. It was at the beginning of Caragea Voda's reign, when sas Mathias Bródy came to Bucharest with a diorama comedy play the city of Bucharest had not seen before.

The play set up was arranged in the backyard of a local boyar's house, Iordache Slatineanu, whose property was spreading from Calea Victoriei to Academiei St.

For over four years, during which Mathias put aside quite a fortune, his diorama comedy play attracted large audiences. Around 1828 a new building was erected in the area where the diorama used to run. Italian Eronimo Momolo, who was the cook of Grigore Voda Ghica ruler, has installed a theater there. The theater would live long there and Bucharest inhabitants would call it “the small theater.” Momolo was the one who eventually bought the Slatineni boyar houses on the premises of the current Casa Capsa and opened a pub at the ground floor. The first floor used to host a ball room which became famous during that period. But its fame only lasted for 30 years, when another ball room appeared in the city – Bossel ballrom, and when a new street was built through the yard of the boyar house. The name of the street was the New Street at the time (it was an early name given to all new streets built during that time), but eventually became Edgar Quinet St.

It was around 1868 when the Capsa brothers- Constantin and Grigore- set up their confectionery shop at the ground floor of the Slatineanu house. They had moved the shop from the premises of the current Bancorex building on Calea Victoriei

The coffee shop, the restaurant and the hotel were opened later on, 1885-1891, when the Capsa brothers bought the Slatineanu house and expanded it.

What Capsa meant for the Bucharest history...that's hard to describe in only a few lines. “Capsa is the moral and topographic soul of the city of Bucharest,” said Paul Morand.

Its fame faded towards the end of the inter-war period. The building was damaged in the 1940 earthquake and in the 1944 bombing, but has been eventually revamped. Nowadays, Casa Capsa hosts a  luxury hotel – restaurant which reminds too little of the glory days.