Skip to main content
Daily News
Romanian film review – Under the wheels of power: Why Me? 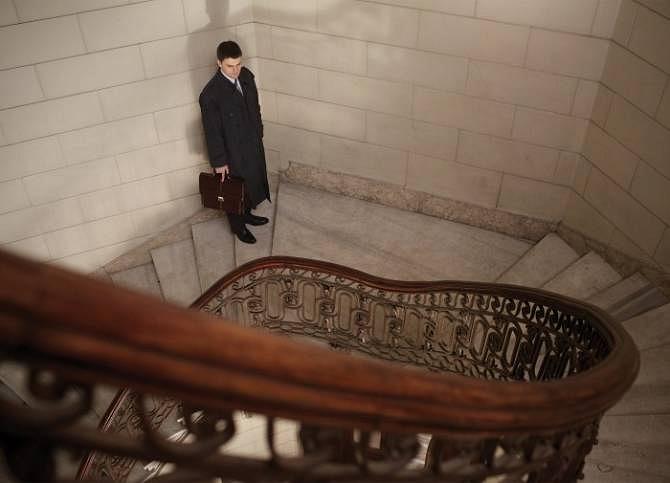 Another Berlinale, another Romanian triumph. At this year's edition of the Berlin International Film Festival (February 5–15 ), Radu Jude was named Best Director for his remarkable period drama/road movie Aferim!, a beautifully shot, engaging and intelligent take on Romania's history in terms of racial relations. Aferim! will premiere in Romania on March 13 and more on its (many) virtues then.

The festival screened another highly-anticipated Romanian film, Tudor Giurgiu's legal thriller De ce eu?/Why Me?, and you will only have to wait only until Friday, 27 February, to watch it in cinemas across the country.

Why Me? is Giurgiu's third feature and just like with his previous crowd-pleaser Of Snails and Men, Giurgiu revisits recent history and chooses a 2002 highly-publicized corruption case for his polished drama. Back then, 29- year old prosecutor Cristian Panait committed suicide in still-unclear circumstances after he had gotten under high political pressure when investigating an attorney and a politician accused of corruption.

In the film, the ambitious protagonist is called Cristian Panduru. When he is assigned to the case of an allegedly corrupt local official, he finds himself caught in a dangerous game of power. Starting to suspect the case isn't as simple as initially assumed, Panduru doesn't deliver the expected, which causes his professional downfall, while his personal life falls too pieces as well. Consumed, paranoid and severely exhausted, Panduru eventually chooses a radical way out.

Why Me? is a solid, well-made movie with the best of intentions (even if worn in its sleeve) and kudos to Giurgiu for tackling an issue which is just as relevant today as it was in 2002. Considering how ubiquitous corruption has been in Romania's institutions, it's actually quite intriguing that the issue hasn't been addressed so directly, at least in a fictional form. Unfortunately though the film is curiously un-engaging for a thriller and despite the actors doing their best, the audience is kept at a safe empathic and emotional distance. It is also a movie you may feel you've seen before, with a lot of conventional elements, both of narrative and style (such as out-of-nowhere steamy sex scenes, or a never-ending shots of dark offices filled with cigarette smoke). More humor and thrills would have helped, even at the peril of being less factually 'accurate', just like a trimmed running time (at 130 minutes, the pic is definitely over-long).

Still, this is a handsome and earnest tale about individual choices and the social and personal damage of corruption. Why Me? is definitely one of most important releases of 2015 and I have a feeling it will also fare well at the 'box office'. And as such, I'd say it deserves your time and attention.