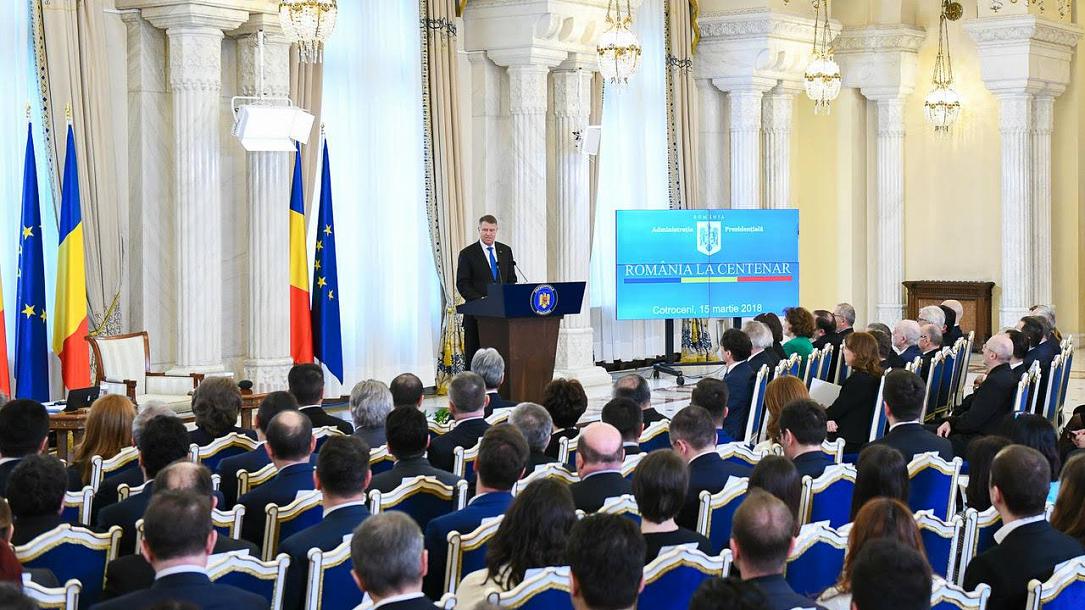 It is regrettable that the projects dedicated to the Centennial are prepared outside of a legal framework, which has not yet been adopted by the Parliament, president Klaus Iohannis said.

“It is also regrettable the fact that, although the successive governments of the past year have repeatedly announced an imminent national program for the Centennial and a transparent and operational support mechanism, this did not happen,” Iohannis said.

“Unfortunately, petty political games won against a rare opportunity: that of building political consensus, cohesion and social commitment around objectives and projects for modernizing the country, continuing the ideals of the Great Union,” he explained.

The president said he encouraged all the five governments Romania had after 2015 to "undertake with maximum responsibility the role of proving, through specific, important projects, implemented with responsibility, our country’s capacity to undertake its second century of modernity.”

The president also said it would be wrong to go for “useless festivity” when celebrating the Centennial, and argued that the celebration doesn’t mark only moments from 100 years ago but it is about the entire route of modern Romania and the country’s future projects.

He made the statements at a debate on 1918 Union Centennial organized at the Cotroceni Palace, the headquarters of the Romanian presidency. Romania is celebrating this year 100 years since the 1918 Great Union, when several provinces, including Transylvania, Basarabia, Bucovina and Maramures, joined the Romanian Kingdom of the time.

A book on diseases, patriotic poetry performances and a county football tournament were among the projects on the list of 2,042 ones celebrating the centennial of the 1918 Union, Ivaşcu said in an interview with the public television TVR.

The projects were annulled because they came with incomplete specifications. The ministry asked all institutions to resend in a complete version the projects they had drawn up for the 1918 Union celebration. The institution also seeks to clarify the financing mechanism for them. A budget of RON 150 million (EUR 32 million) has been allotted within the Culture Ministry for the year of the Centennial, News.ro reported.

The culture minister called the celebration of the 100 years since the Great Union of 1918 the greatest challenge this year and highlighted the lack of vision on the celebration so far.

“This great celebration was actually a division in 2,042 project ideas. It was lacking a vision and a leading concept,” Ivaşcu said.

The culture minister explained that the events organized to celebrate the Centennial will not end in December of this year but that they would take place across several years, in accordance with historical data and documents.

Ivaşcu put forth March 27 as a date for the start of the projects. “I am mentioning this date because we need a legislative framework, first of all. People were promised money but there is no emergency ordinance outlining the legal payment mechanism. This is what we are doing now,” the minister said.

Besides a lack of creativity-inducing enthusiasm, the minister pointed to the flawed organizational chart of the ministry.