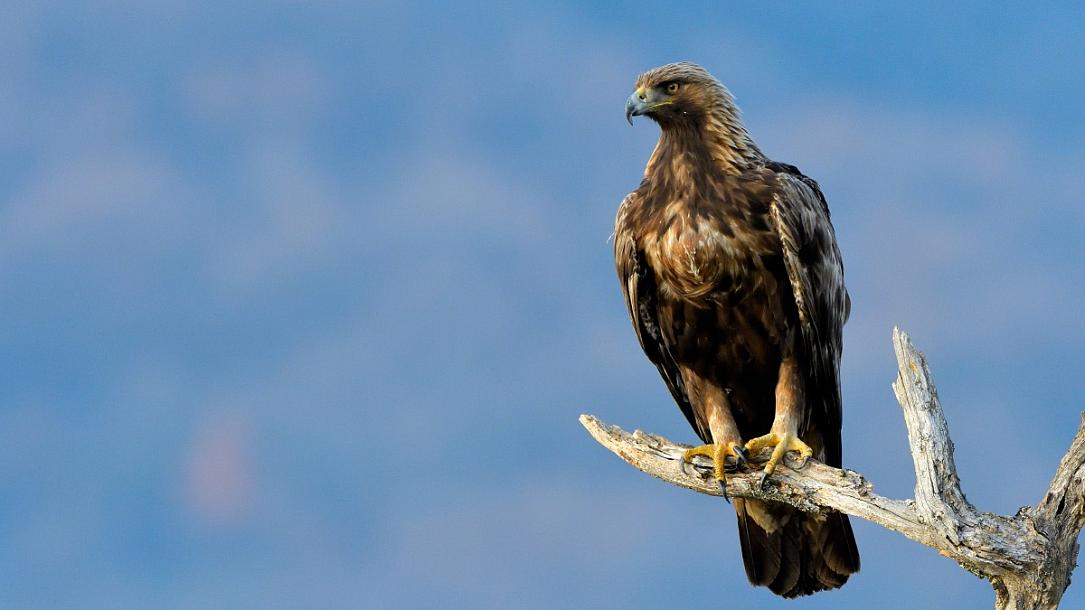 The golden eagle (Aquila chrysaetos) is an agile predator that has long been associated with power and nobility. The bird featured as a symbol of the Roman legions and it is also a frequent national symbol in cultures across the globe. It can be found in the mountains of Romania, a signal of the existing biodiversity.

The golden eagle used to be widespread throughout local mountain areas but it went down significantly in numbers over the past century. A slight improvement has been noted after more attention was paid to its protection. There were an estimated 30- 40 nesting pairs in the country in 2002 and 30 to 50/60 in 2012. Overall, the European population was estimated to stand at 9,300-12,300 pairs in 2015.

The drop in the population of golden eagle was due especially to a policy of combating raptors through poisoning. Hunting, the use of organochlorine pesticides, used in agriculture and mosquito control, or the poor availability of food also contributed to the population decrease.

The golden eagle can be found in the mountain areas with rocky parts, wide meadows and broad forests. It nests on cliffs or high trees and it feeds mostly at the alpine pastures and meadows. It nests only in the Carpathians, both in the lower and higher mountains. It is a sedentary bird, but, especially during winter, it can go down to the plains, and was spotted even in Dobrogea. During the cold season, some birds come from the north as winter guests.

The bird is dark brown, with lighter golden-brown plumage on the nape. The immature eagles usually have white markings on the wings and on the tail. The golden eagle is a large raptor, reaching 80 to 93 cm in length and an average weight of in between 4 and 6 kg, with the females a bit larger. The wingspan stands at in between 1.90 and 2.25 meters. They fly at a speed of 45 – 51 km per hour but can reach 190 km per hour when gliding and 320 km when diving after pray.

Sometimes pairs hunt together, with one partner stalking the prey and the other taking it down. Both partners work to build the nest. The females lay 2 – 3 eggs towards the end of March or beginning of April, which they incubate for 43 – 45 days. Fledging occurs when they are 65 – 70 days old but the chicks remain dependent on their parents for another 14 to 21 days.

The species is generally sedentary, with juvenile eagles dispersing as far as 1,000 km in their first few years. For instance, when Milvus Group monitored the movement of golden eagles in the Trascău Mountains area and in the Apuseni Natural Park in 2016, it found that after leaving the nests area in March-April, the bird traveled some 1,700 kms.

The golden eagle has a broad diet and it snatches the prey helped by its agility and speed, powerful feet and sharp talons. It feeds on small mammals, birds, reptiles, fish, amphibians, insects and carrion, depending on the availability. The golden eagle can compete for food with other species of carnivores, from weasels to wolves, among the mammals, or the hawks or owls, among birds. Sometimes, some of its competitors can serve themselves as food for the eagle, and the carrion left from the dinner of the wolves, or more rarely, that of the bears, can provide their food, mainly at winter.

The golden eagle has an important role in maintaining the delicate balance of the ecosystem it belongs to as it keeps in check the populations it preys on. It practices the natural selection by consuming mostly sick and old animals, not viable genetically, and also has a sanitary role when eating carrion.

Illegal logging or that is unfit to the demands of the species, the scarce food resources, caused by the habitat changes, and poaching are all still threatening the golden eagle. The collision with electricity wires and electrocution, the accidental poisoning or the collision with the wings of the wind turbines are other factors threatening the presence of the bird. The forestry activities, especially those close to their nests, chaotic tourism, and other human activities undertaken in the areas where it nests and feeds have a negative impact on the habitat and behavior of the birds.

Improving the management of forests, which includes keeping the old trees in the areas where the golden eagles nest and establishing wide areas of full protection, where the intervention of humans is minimal, would help with the protection of the species, specialists say. Reducing the disturbances caused by aggressive tourism and hunting, the elimination of insecticides inside the protected areas and surrounding areas, and eliminating the practice of purposefully poisoning carnivores are other measures that would aid, as would the controlled feeding of birds until the population is redone.

The travelling Golden Eagle – 1700 kilometers in just a few months at milvus.ro