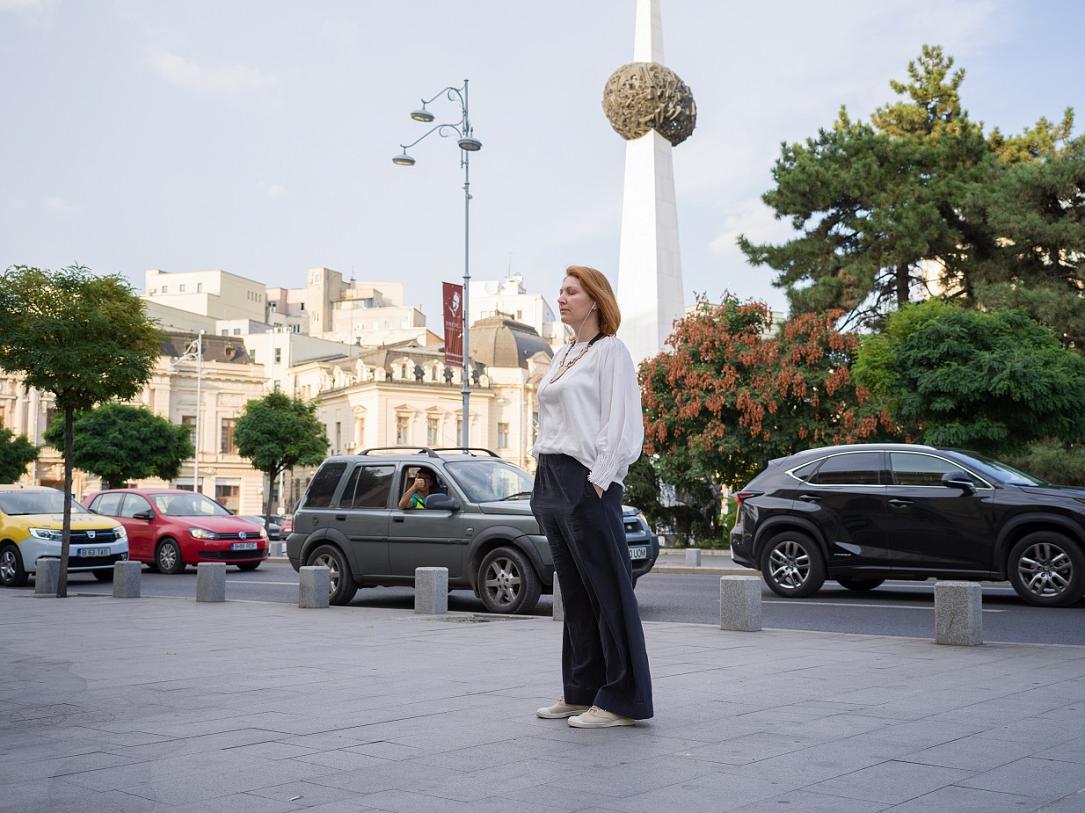 A project of German theater label Rimini Protokoll that has just received a Romanian version invites the audience to a series of audio- guided walks where the stroll turns into a theatrical scenario and the surroundings into a stage.  All the while reconsidering what a theater play can be, and offering an alternative at a time when most performance venues have seen their program impacted by the pandemic.

The Walks, a collection of audio walks by theater label Rimini Protokoll available in an app, is scheduled to launch in a Romanian version starting October 1. The project is done in a coproduction with creart/Teatrelli and a partnership with Goethe Institut Bucharest. Each walk proposes a short audio experience, of about 20 minutes, allowing the audience to do the walks whenever they want, how many times they want, and in the order of their choice. The Romanian version will be available to the public in the country or outside of it.

The script and direction were designed by Helgard Haug, Stefan Kaegi, and Daniel Wetzel, the trio who founded the Berlin-based theater collective Rimini Protokoll in 2000. Known for innovative productions, interventions and installations or audio performances, the group received a host of distinctions, including the German theatre award Faust, the Grand Prix Theatre from the Swiss Federal Office for Culture, the European Theatre Award, the Silver Lion at the Theatre Biennale in Venice, as well as the German Audio Play Award. In their 20-year body of work, they have experimented with various formats and projects that have expanded the means of the theatre and taken productions outside of the traditional performance venues. ___STEADY_PAYWALL___

An invitation for the public to rediscover their city and experience it in a novel way, The Walks emerged during the pandemic, and its periods of lockdown and social distancing, Helgard Haug (pictured center in photo below) explains.

“In the times of the lockdown, when we were restricted or had to be socially distant, walks became a very important thing to do in terms of being physically active and connecting to the outside. I talked to many people that realized that they haven’t done those kinds of extensive walks in their own city. You normally do this when you visit a city; when you are a tourist you start to walk, but in your own city you tend to do all the same routes all the time. So, observing this and realizing that there were so many limits on the other side of doing other projects, we said let’s develop an app that invites people globally to do the walks.”

It was also a way of finding independence from big institutions and exploring new theater forms.

“It’s an attempt to be independent from big institutions as well. In the first lockdown, when the first corona wave happened, we, as theater makers, had nothing; they closed the theaters and canceled the shows, and it was very traumatic to see how much you depend on the open door of an institution and its rules. We’re also reacting to this by doing something that is really independent, where you just have your own imagination, you have your own device and maybe friends to invite, and maybe that’s a theater play, after all. That was the most important to say for us: no, we don’t stop working or inviting the audience or playing because the doors are closed.”

Unlike previous projects that experimented with the format of the walks in a site-specific way, this time the challenge was to construct something that fitted all the places, while exploring the layers of meaning attached to various locations and different perspectives, be that of a younger self, or the interaction that arises in a walk for two in the park. Furthermore, the same strolls done every day could be changed by the viewpoint introduced with the walks. The process reveals the symbolic layers of the chosen venues. A roundabout, for instance, is not about a specific roundabout with a historical meaning but explores such a site’s role in a revolution or political movements. The familiar supermarket becomes the setting for a walk that can change one’s perception of such retail areas, while the cemetery walk invites to reflection on its place and structure, and the connections the living person makes with it. While everyone’s experience and surroundings inform every walk, the stories and soundscapes have a global scope, inviting the audience from different places to reconnect on another level, in an experience happening in iconic places, available in all cities.

The project understands walking as a theatrical scenario, where the users of the app are audio-guided step by step through various sites, turning the city into a stage. As Haug explains, the urban space becomes a stage when it is framed as such, allowing the audience to take note of connections and stories undetected before.

“I think it [the city] really very easily can be defined as a stage when you frame it as a stage. There are certain projects that we’ve been doing- for example inviting people to sit in a truck [e.n. Do’s & Don’ts] and they look through one side where the wall has been replaced by a window; so you sit and see through a huge window your own reality. […] By looking at things closely and taking the time to actually perceive them, the place unfolds like a theater stage. Suddenly you see all the connections between the people, you see a lot of stories by just observing; it’s an exercise that you could easily do by yourself, just taking the time and being an audience for a certain time but of course it helps if it is connected to a certain story. We try to do this with The Walks as well in that you are invited to observe in a very specific way, that we include music for example which brings you into a specific atmosphere. I think just by stopping and observing it’s already a lot of theater, and a lot of what you can learn, knowing that you’re a part of this.”

Asked what the audience can be left with from trying The Walks, she points to a novel point of view they provide. “They are all food for thought, I think. They are all trying to introduce something new to a place that you are maybe very familiar with; it’s kind of like slipping into somebody else’s shoes or twisting a situation and just making you experience your very close surrounding in a very different way, inviting you to observe closely and take in the poetic moments that exist in normal life.”

At the same time, they can help expand the definition of theater and be a gain in times of the pandemic.

“The best thing would be that we gained something in the pandemic; to say: aha, true, I can extend the definition of theater and I can use an app so it is maybe also theater or I can have a zoom conversation and it gets theatrical; that’s the hope - that you can offer something that adds up something and not only makes you feel missing something.”

The Walks is available from the App Store or Google Play. To start the Walks, the user receives an activation code when you buy the ticket, which you redeem in the app. More information about each walk is available in the app.