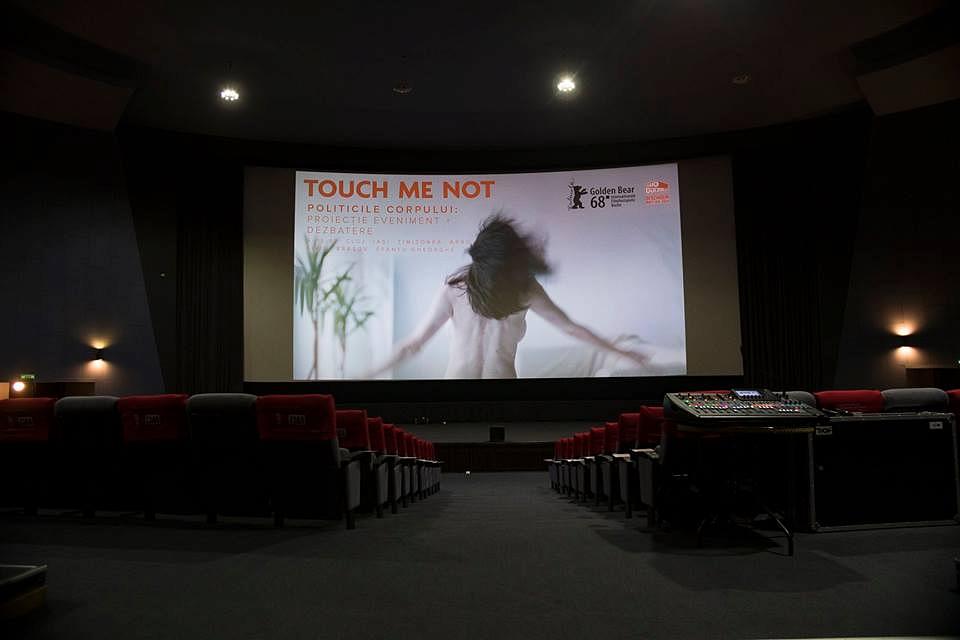 Unless you have been living under a rock for the past year, you must have heard at least a few things about it. There have been few Berlinale films in recent years so passionately discussed. Love it or hate it, this film will make you feel and think.

A mixture of fiction and documentary, Touch Me Not is a study of intimacy and how people can or cannot experience it. The film presents itself as a project of a young filmmaker (Pintilie) on intimacy, and her main focus is on Laura, a middle-aged woman who has decided to tackle her fear of being intimate and allowing herself sexual pleasure, and whose sessions with male sex worker (and conscious kink teacher) Seani Love and trans sex worker Hanna are the most fascinating parts of the film. Like Laura, Tomas, a young man suffering from alopecia, also tries to connect to others and overcome his life-long feeling of not belonging in the course of a workshop. His partner is Christian, a severely disabled man who is, despite (or, arguably, because of it) the most at ease with his body and sexuality. He is also the film’s most pivotal figure because of how the others move around him, and the audience, gradually change how they perceive him. The sessions in which he and Tomas touch each other are both incredibly uncomfortable and liberating.

Laura and Tomas are played by professional actors (and these are their real names, again blurring the line between scripted and biographical) while Hanna, Seani, and Christian Bayerlein basically play themselves, and they are all flawless. The former bear it all, emotionally and physically, while the non-professional cast are particularly impressive not only due to their extraordinary personal stories but mainly for their ability to express so much vulnerability. Hanna, in particular, is such a warm presence and brings a much-needed dose of humor in a film that is particularly serious.

Which brings me to its biggest problem, or at least the aspect that might alienate some viewers. Touch Me Not is Adina Pintilie’s feature debut, a long labor of love developed over the course of seven years, and maybe that is why it is such a serious matter to the point of lacking any levity or humor, both in the way it handles the topic and in the characters’ reflections. Intimacy problems are not a laughing matter, of course, but human interaction, especially physical, is also bound for at least a bit of silliness. That is why both Hannah and Seani Love are such welcome presences. This gravity is accompanied by an urge to use some too-obvious tropes to hammer home certain points, like the scene in a sex club. Intimacy, in general, is very much discussed on a sexual level here while sexual liberation is linked with fetish and BDSM, at least at the film’s conclusion, and I would have wished for a more nuanced view on the matter. The focus on the director (or the directorial figure) herself (Pintilie often intercuts herself between scenes, talking about herself or interrogating Laura), while being laudable in its openness and a part of the film’s frame, does not work that well in the final product and is often disruptive. Touch Me Not is obviously a personal affair, but it also comes across as navel-gazing at times.

What it does get right, though, it gets really right, like the intelligent reflections on ageism, transphobia, sex work, or disability and sex. But the most touching effect of the film is the way perceptions shift, both of oneself and of others, as well as of what we understand by attractive, sexual, or transgressive, and this is a journey made by the figures and the audience at the same time.

This is a confrontational, uncompromising artistic product, and admirable in its ambition and earnestness. There is so much kindness and generosity for its protagonists, both real and fictional, and an absolute lack of judgment. Unlike other filmmakers who view their characters or subjects with detachment or some sort of judgment, Pintilie has nothing but love and sympathy for them. For that alone, and for daring to address topics still considered taboo (at least in mainstream outlets, and certainly in Romanian society and cultural products) while actually showing these different bodies and not just discussing them in theory, Touch Me Not is one of the most important films to come out in recent years in Romania.

You can check out the dates and venues at Cinemagia.ro, and the trailer below.