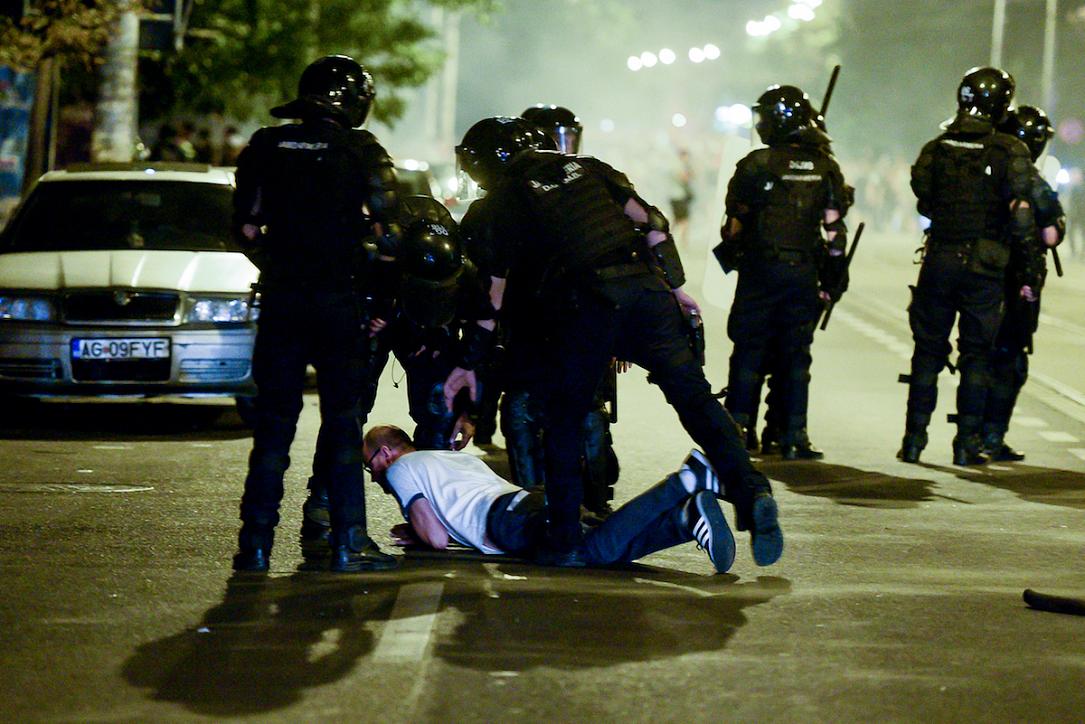 What started as a peaceful protest in Bucharest’s Victoriei Square on Friday morning ended in violent clashes between the riot police and groups of aggressive protesters, most likely hooligans from the galleries of Bucharest football teams. Many peaceful protesters ended up being hurt by the gendarmes, which intervened with an unprecedented violence against the people to clear the square.

The protest on Friday was supposed to bring Romanians abroad and those in the country together to state their dissatisfaction with the ruling coalition and current government and their policies.

Many Romanians came from the farthest corners of Europe to join this rally. Protesters started gathering in the square at the earliest hours on Friday morning. For most part of the day, the protest was peaceful. However, after 4:00 PM, the first violent incidents occurred as a handful of protesters tried to pass the riot police and reach the Government’s yard. The riot police intervened with tear gas against hundreds of people in the square.

The crowd started growing after the incidents. Some minor incidents still occurred in some parts of the square, but most of the crowd was peaceful. At 9:00 PM, the protesters lit up their mobile phones, which has become a trademark of anti-govt. protests in the last year and a half. About 100,000 people were believed to be in the square at that time.

However, about the same time, more serious incidents erupted as some bigger groups of violent protesters started clashing with the riot police. They were identified as ultras fans of football teams in Bucharest. They threw bottles, pieces of pavement and even pouches with urine at the gendarmes. The riot police reacted in force throwing tear gas, smoke grenades and bringing the water cannon. Hundreds of peaceful protesters were also hurt during the intervention and needed medical care. Some gendarmes were also hurt. Two of them, including a woman, were savagely beaten by a group of hooligans who also took their guns.

Incidents continued to escalate and around 23:00 the riot police moved in on the protesters and cleared up the square. The protesters started to leave and after 1:00 AM things started to calm down.

Besides the big protest in Bucharest, others took place in Romania’s biggest cities and in several cities abroad on Friday evening without any incidents.

The protest had a wide echo in social media and was also reflected in international media, with some international newspapers such as Le Monde comparing them to the December 1989 events. Images and videos of peaceful protesters beaten by the riot police without any apparent reason were widely commented. President Klaus Iohannis condemned the incidents in a Facebook post and asked interior minister Carmen Dan for explanations.

Several questions remain unanswered such as who brought in the hooligans, why did the riot police intervene with such disproportionate force. Meanwhile, what would have been a one-day protest may continue in the next days as many people disapprove the way the authorities handled the situation and are determined to go back to the square.

A collection of photos and videos of the August 10 events can be found here.