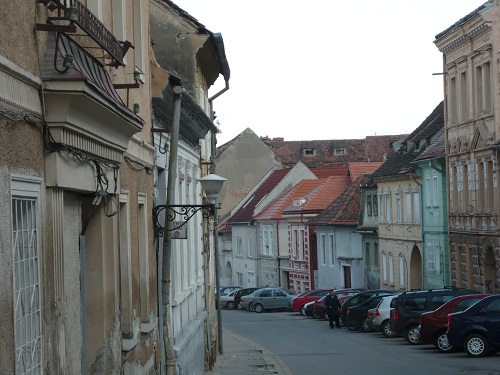 Brasov was the capital of the Barsa Land, and is today an upcoming city – undoubtedly you will notice the recently built shopping malls and industrial estates as well as the sites still in development at the outskirts. The city looks back on 800 years of turbulent history at the point of intersection between Orient and Occident.

Founded by Teutonic knights at the beginning of the 13th century, until the 18th century it was still predominantly inhabited by Transylvanian Saxons – a heritage that gives the city its special German-like distinction. Once through the ring of block districts, you reach the old town that lies framed by steep slopes in a valley. At its end soars the 65 meter high tower of the so called Black Church, which got its name after a devastating fire swept across the town in 1689 leaving it with soot-blackened walls. The largest gothic church in Romania, it was built between 1385 and 1477; after several renovations the interior became mostly baroque. The large collection of Turkish carpets to be seen inside the church gives you an impression how tight the connections between Transylvania and the orient have been.

But not so fast. Before we have a closer look at this landmark you should stroll around the lively old town’s streets. Walking up the pedestrian precinct Republic Boulevard (B-ul Republicii) you will find shop after shop, and numerous cafés and restaurants, usually with plenty of inhabitants and tourists – the enjoyable atmosphere is not least a result of ongoing restorations within the historic centre – in summertime these places are suitable to take a rest, sitting at a table in the middle of the street, watching the crowd. If you walk further you will get to the fan-shaped Town Hall Square (Piaţa Sfatului), a wide space with the Town Hall in its middle, lined with red-roofed merchant houses. The building dates from 1420 and for centuries hosted the Saxon town council. 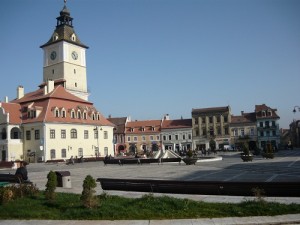 Maybe you already noticed at the city’s entrance, but if you look upwards to the eastern slope you can see the Hollywood-like lettering writing the city´s name above the roofs. The respective mountain is called Pinnacle (Tampa), which is 955 meters high.

There is a funicular (cable car) on Avenue Tiberiu Brediceanu (Aleea Brediceanu), which is also the starting point for a marked footpath up to the top. You can find the station near the Weavers´ Bastion which is part of the former city wall. Parts of the wall are still intact; some of the fortifications from the 15th century like the White and the Black Towers are open to visitors, and the old fortress on the hill of the same name (Dealul Cetăţii) houses a restaurant.

Passing through the Schei gate, situated some 300 meters behind the Black Church, you enter the traditional Romanian district. Up until the 17th century Romanians were not allowed to acquire property within the city walls, which was a privilege of the Saxon population. Thus, Romanians settled outside the fortifications, e.g. in Schei District which is one of the oldest. Do you feel the slightly changing atmosphere? Houses are smaller, huddling together, streets are narrower. In midst of this quarter at Unity Square (Piata Unirii) stands a pretty orthodox church, and alongside the oldest Romanian school. 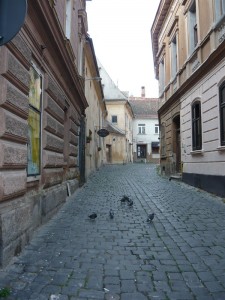 At the end of the narrow valley a forest road leads through the woods to the Poiana Brasov ski resort, 12 kilometers outside the city. Thus, if you plan a winter trip to ski in the Carpathians this area might be the one of your choice. It is accessible by car via the Oak Street (str. Stejarisului) or from the small town Rasnov situated just west of Brasov via the National Road DN 1E. Various pensions and hotels offer accommodation; eight ski-slopes are available ranging from three hundred meters to three kilometers in length. Brasov’s surrounding regions also offer some interesting places. For sure, you have heard of castle Bran, the alleged seat of Count Dracula. Let´s get rid of this myth. Since the first western tourists quested for the vampire’s castle somebody decided to sell them Bran as the one. So the marketing machine started to work and now the small location is overgrown with thousands of adventure-seeking visitors, getting their money thrown out of their pockets by smart Romanians. Anyway, the castle looks nice, but actually was built by the Brasovians to control a toll collection point. Yes, there are stories that Vlad the Impaler stayed a night or two here, but it was definitely not his castle. In the case of Vlad there are definitely more authentic places.

Still, the castle lies at the edge of the Bucegi Massive, which comes to a few famous mountain stations like Sinaia or Predeal. A recommendable natural site is the National Park of King´s Rock (Piatra Craiului). Along the 25 kilometers long limestone ridges you will find a number of summits, the 2,244 meter Piscul Baciului being the highest. The area is a hideaway for rare plants and animals, among them wolves and bears – a paradise for nature lovers and friends of hiking. Some 50 kilometers west of Brasov is another gorgeous hiking challenge – a trail up to 10 days long along the ridge of the Fagaras Mountains.

Do you prefer more convenient amusement? You want to learn about regional history? Then you must not miss the fortified church of Prejmer. The monolithic white colossus dominates the wide square of the village that is about 15 kilometers outside of Brasov. Ten meter high walls repelled the enemies that came, bad luck for the dwellers, quite often across the mountains. The village was sacked more than 50 times over the centuries, but the holy fortress resisted. In 1999 Unesco put it on their world heritage list. From May to October you can visit the church between 09.00 and 17.00 hours, and on Saturdays until 15.00 hours. The same is true from November to April; but it is closed on Sundays and Mondays. Any of the former Saxon villages in this region has its fortified church, as you will see if you drive through the country; in contrast the peasant fortresses are a rarity. But, you can find one on way, via the National Road DN 73 back to Bucharest. It lies above Rasnov.

Built by Teutonic Knights in 1215 its walls enclose some houses as well as a small church. Enjoy the view from the platform into the country before you start out to the capital. 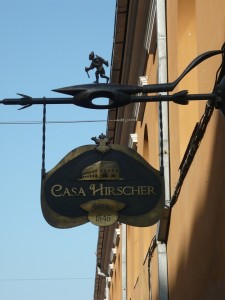 The park offers 100 different activities in the forest in trees at different heights depending on the chosen route. Prices vary from RON 37 for a single adult to RON 21 for children. Group pricing is

Equus Silvania, 507210 Sinca Noua, Brasov County, +40 268 228 601, www.equus-silvania.com/en/indexe.htm. Highly recommended by several readers, this horse riding and guesthouse pension close to Brasov seems to be perfect for a family week-end with kids and horses

Tea Houses and Cafés- Ceai et caetera, 37, Castelului St., +40 372 74 17 45, www.ceaietc.ro. If you are alone, with your soul mate or with your friends, for sure you will love this place that makes you feel like home. It is the only tea house in Brasov and it offers a great variety of fine tea (green, black, mate, Rooibos, fruit and plant infusion), lemonade, natural juices and cakes.

Pubs & Clubs - Formula Pub, 29, Eroilor Blvd., +40 268 41 41 13, Formula Pub feels very Mediterranean, and it is a nice place to drink beer and eat specialty pastas. Good music at a level that allows normal conversation! You can see live broadcasts of Formula 1 and other sports.

Hotels- Bella Muzica, 19, Piata Sfatului, +40 268 47 79 46, www.bellamuzica.ro. Situated in a 400 year old building with neo classical architecture, this hotel features a restaurant with Mexican, Hungarian and international specialties. Prices range from RON 220 for a standard to RON 540 for an apartment with a Jacuzzi.

Shopping- Str. Republicii. This is the main pedestrian street of the old center. It features a surprising amount of shoe, clothing, accessories, and bookstores. You will also find ATMs, pharmacies and banks.

For constantly updated and in-depth info, check out the City Compass website, as well as the following links: www.iubescbrasovul.ro, www.brasovcity.ro, www.ghidbrasov.ro

More recommendations in the City Compass Guide Bucharest Romania and Beyond.

Holger Wermke is a native German who has been living in Sibiu for two years, where he is a journalist for the Allgemeine Deutsche Zeitung für Rumänien, a German-language newspaper. His latest book „Weltkulturerbe in Siebenbürgen”, a German-language guide to the UNESCO Heritage Sites throughout Transylvania, was published last December.

Anca Gansca is Romanian and has been living in Brasov since 2009. She opened a tea house where people truly “feel at home”! Anca is passionate about the human resources field, likes to visit other cities, play board games with friends and to make tea for everyone.

This article has been originally written for and published in City Compass’ English – language guide ‘Bucharest, Romania & Beyond’ (that you can buy here).