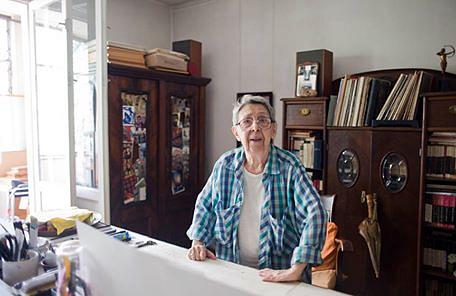 After a career of over 50 years, Brătescu is regarded as one of the most important contemporary Romanian artists, also visible internationally. Her work can be found in the collections of museums such as the New York MoMA, the London Tate, or the Vienna Modern Art Museum.

Last year, Romania took part in the same event with works by painter Adrian Ghenie, a representative of the Cluj School, and a headliner in recent years for the sums his paintings sell for.

Geta Brătescu was born in 1926 in Ploieşti, a city 59 km north of Bucharest. She initially studied at the Faculty of Letters in Bucharest, between 1945 and 1949 and later enrolled in the Nicolae Grigorescu Fine Arts Institute, also in Bucharest, between 1969 and 1971. She had begun art studies at the Fine Arts Academy in 1945 but was forced to abandon them because of the political climate.

Her artistic career began in the 1960s and she is considered an important representative of conceptual art in Romania. She makes use of different media, including drawing, photography, film, textile work, and sculpture.

Brătescu also participated at the 1960 Venice Biennale in a group exhibition, and in 1983 and 1987 she was present in the Sao Paolo Biennale. In 2013 she was one of the three Romanian artists, alongside Ștefan Bertalan and Andra Ursuta, exhibiting at the Central Pavilion of the Venice Biennale.

She received in 2008 the Doctor Honoris Causa title from the National Arts University in Bucharest for her remarkable contribution to the development of contemporary Romanian art. A retrospective of the work was on display at the National Art Museum in Bucharest in December 1999.

The selecting committee was made up from architect Attila Kim, the commissioner of the Romanian pavilion at the 2016 Venice Biennale; Cristian Alexandru Damian, a main referent with the Romanian Institute for Culture and Humanistic Research in Venice; Igor Efrem Zanti, director of the European Design Institute in Venice; Fabio Cavallucci, director of the Luigi Pecci Contemporary Art Center in Prato, Italy; Călin Dan, the general director of the National Museum of Contemporary Art in Bucharest; independent curator Adrian Bojenoiu; and Anca Drăgoi, state secretary in the Ministry of Culture and National Identity.

The Venice Art Biennale (Biennale Arte) takes place this year between May 13th and November 26th 2017 under the headline Viva Arte Viva, and is curated by Christine Macel.