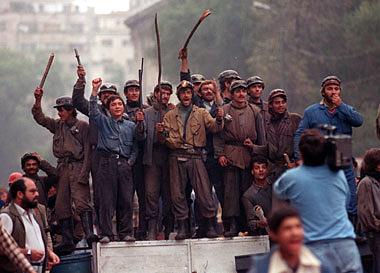 The trial targeting the violent crackdown of the protests in Bucharest’s University Square in June 13-15, 1990 started today, February 20, with former president Ion Iliescu and former prime minister Petre Roman being among the defendants.

The June 1990 events are also known as the “miners’ riot” in Romania, because it involved miners coming from Valea Jiului to suppress the peaceful protests in Bucharest’s University Square against president Ion Iliescu’s political regime. Four people were killed and 1,388 were injured during the violent events, while 1,250 were illegally held.

Ion Iliescu is believed to have called the miners, to pacify the “punks” and “thugs” protesting in the University Square. After the miners dispersed the protesters, Iliescu thanked them for “answering our call”. However, he has denied calling the miners to the capital, claiming they came spontaneously.

A document declassified in 2017 by the National Defense Ministry showed the army provided food and clothing to the miners who were involved in the Bucharest events of June 13 – June 15, 1990.

The Romanian Supreme Court reopened the miners’ riot case, in March 2015, and former President Ion Iliescu was sent to court in June 2017.