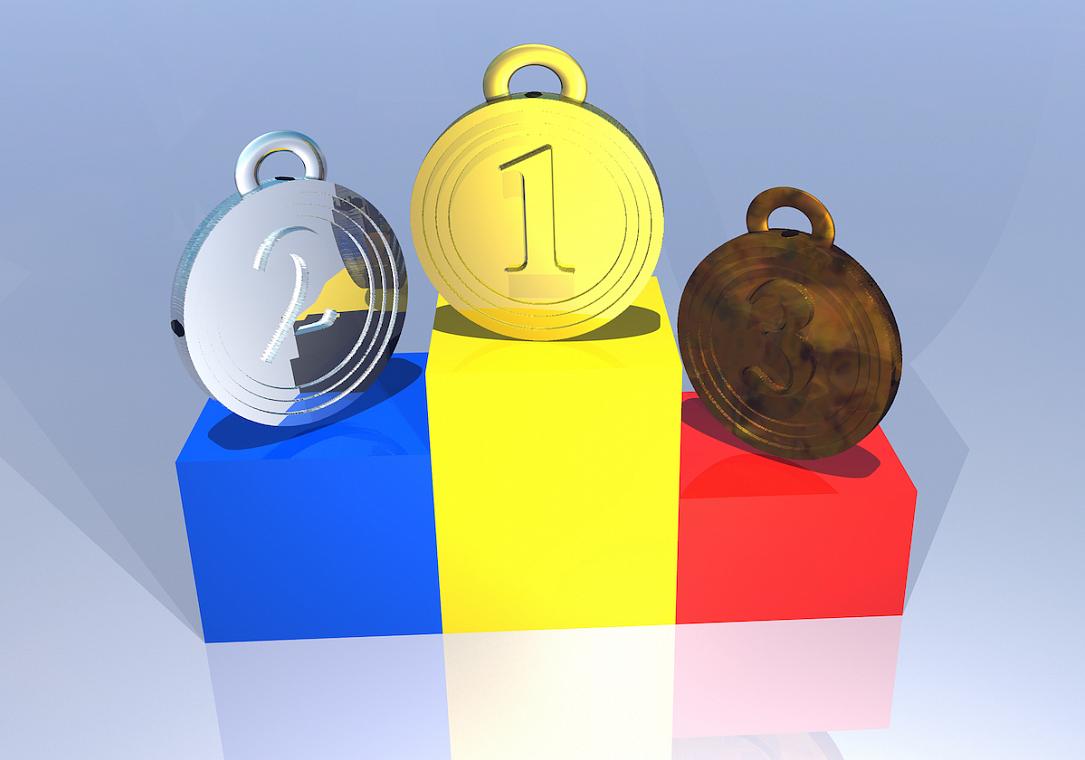 Romanians love to take pride in the performances of their top athletes, who are regarded as national heroes in the country. Here is a list of Romanian athletes who have worked hard and played their way to the top of world sports.

Romanian athletes managed great performances in international competitions, or even made history in their sport, putting Romania on the world map. Take Nadia Comaneci for example, who, back in 1976, became the first athlete to score a perfect 10 at the Olympic Games. But there is also Gheorghe Hagi with his magical football skills and famous tennis players such as Simona Halep or Ilie Nastase, who made their fans jump with joy.

The King. That’s how the Romanian fans nicknamed Gheorghe Hagi, the athlete considered the greatest Romanian footballer of all time and even one of the best football players in the world during the 1980s-90s. Through his outstanding dribbles, vision, execution of pass and shots from distance, he managed to impose himself as one of the world’s best players alongside Maradona or Pelé, inspiring future generations of footballers.

Gheorghe Hagi played for the Romanian national team in three FIFA World Cups and three UEFA European Championships. He also played for local clubs such as Sportul Studentesc and Steaua Bucuresti, as well as international clubs such as Real Madrid, Barcelona, and Galatasaray.

Now a football club owner and manager, Hagi has achieved legendary performances during his career as a footballer, earning the love of all Romanians. In fact, back in 1994, following the Romanian football team’s breathtaking victories at the World Cup, where Romania reached the quarterfinals, the Romanians wanted Hagi elected president of the country.

Even today, Romanians bring up his name almost every time they talk about football and they never forget Hagi when it comes to naming great athletes of Romania. Sometimes, even foreigners think of Gheorghe Hagi when they thing about Romania.

On July 18, 1976, Nadia Comaneci made history in world gymnastics, as she became the first athlete to score a perfect 10 at the Olympic Games. The incredible success was registered at the 1976 Summer Olympics in Montreal. In fact, by the time the 1976 Olympics ended, she had earned seven perfect tens, three gold medals, as well as a bronze and a silver medal. She continued her dominance through the 1980 Olympic Games in Moscow, winning two more gold medals and two silver.

Although she retired from competition in 1984 and left Romania to settle in the U.S. a few years later, in 1989, Nadia Comaneci continued to promote gymnastics around the world while also getting involved in events promoting Romania abroad.

The same as in Hagi’s case, the Romanians frequently say Nadia Comaneci’s name when they talk about great athletes, and the foreigners often associate her name with Romania, as she managed to do something that most athletes dream of doing: to put Romania on the world map.

The list of Romanian female gymnast with great achievements is quite long, however, among them Simona Amanar, Larisa Iordache, Sandra Izbasa, Catalina Ponor, Andreea Raducan, and Diana Bulimar.

Nowadays one of Romania’s richest, being the only Romanian included in the Forbes ranking of the world’s richest people, Ion Tiriac is also one of Romania’s most famous former professional tennis players. A former top 10 player in the ATP tour, Tiriac and fellow Romanian Ilie Nastase partnered to form a successful doubles team, which won the French Open doubles title in 1970.

After retirement, Ion Tiriac remained active in the tennis field, working as a tennis coach, advisor and player agent in the 1980s, and then developed the Madrid Open tennis tournament, which he owns. Today he is mostly known as an investor and businessman, and also well known for his passion for rare and expensive cars. However, on top of all that, he has remained in the Romanians’ minds as one of Romania’s greatest tennis players.

Ilie Nastase is yet another Romanian with great achievements in the world of tennis, having been one of the world’s top tennis players in the 1970s. He was ranked world number one between August 1973 and June 1974. He is one of the few players in history to win more than 100 ATP professional titles, including two individual Grand Slam titles: the 1972 US Open and the 1973 French Open.

During his years as a tennis player, Nastase was not only noted for his talent at tennis but also for his ability to entertain the crowd. His colorful personality and the spectacular playing style earned him nicknames like “Nasty” or the “Bucharest Buffoon.”

But his top results in tennis also brought him several awards and honors. For example, in 1991 he was inducted into the International Tennis Hall of Fame, and, in 2005, Tennis Magazine included him on its list of “40 Greatest Players of the Tennis era.” On his 70th birthday, Ilie Nastase received the Star of Romania civil award for services in sport.

And, although his temper brought him some bad publicity over time, including in recent years, Ilie Nastase has remained one of the most loved Romanian athletes of all time.

Si-mo-na! Si-mo-na! That’s something often heard on tennis courts at major tournaments, as Simona Halep manages to gather large numbers of Romanian fans in the stands every time she is playing. She is one of the most loved Romanian athletes today.

Alongside Ilie Nastase and Ion Tiriac, Simona Halep has also made history in world tennis, being ranked world No. 1 in the WTA singles ranking twice between 2017 and 2019. She has been No. 1 for a total of 64 weeks in this period and has finished each year ranked no lower than No. 4 since 2014, and has won 19 WTA singles titles so far.

But the happiest moments of her life as an athlete and probably the best moments for her fans happened in 2018 and 2019 when she won her two Grand Slam singles titles at Roland Garros (2018) and Wimbledon (2019).

Simona Halep is the first Romanian woman to be ranked No. 1 and the first Romanian player to win a Wimbledon singles title. These results come to show once again, if needed, that Halep is a true fighter and a winner. But she has been winning not only tennis matches but also many hearts and minds both in Romania and abroad.

Former professional tennis player Virginia Ruzici also made history in world tennis after winning the 1978 French Open singles championship. In her 12-year career, she won a total of 12 singles titles. Today, she is the manager of Simona Halep.

Most Romanians think of Ivan Patzaichin when they think about rowing, and this is no surprise considering everything Patzaichin has been doing for this sport in Romania.

He is a famous Romanian rowing champion, having participated in all major competitions between 1968 and 1984, including five consecutive Olympics. He won gold medals at the Summer Olympics in 1968, 1972, 1980 and 1984, before starting to work as a coach. He was even awarded the Olympic Order in 1990, the highest award of the Olympic Movement, awarded for particularly distinguished contributions to the Olympic Movement.

Ivan Patzaichin is the founder of the "Ivan Patzaichin - Mila 23" Association, an organization involved in promoting ecotourism and areas of the Danube Delta. He also launched the national project “Rowmania” aiming to promote outdoor activities.

Gabriela Szabo is a famous Romanian athlete who, similar to the other athletes in this list (and not only), has taken Romania’s flag to the podium of international competitions. She is a retired runner who competed in the 1500 m and 5000 m events at the 1996 and 2000 Olympics, and won a gold, a silver, and a bronze medal. She also competed in several other European and international competitions.

She retired from competitions in the spring of 2005 but remained in the Romanians’ hearts forever. A top figure in Romanian sports, she was appointed minister of youth and sports in March 2014, in the government led by Victor Ponta.