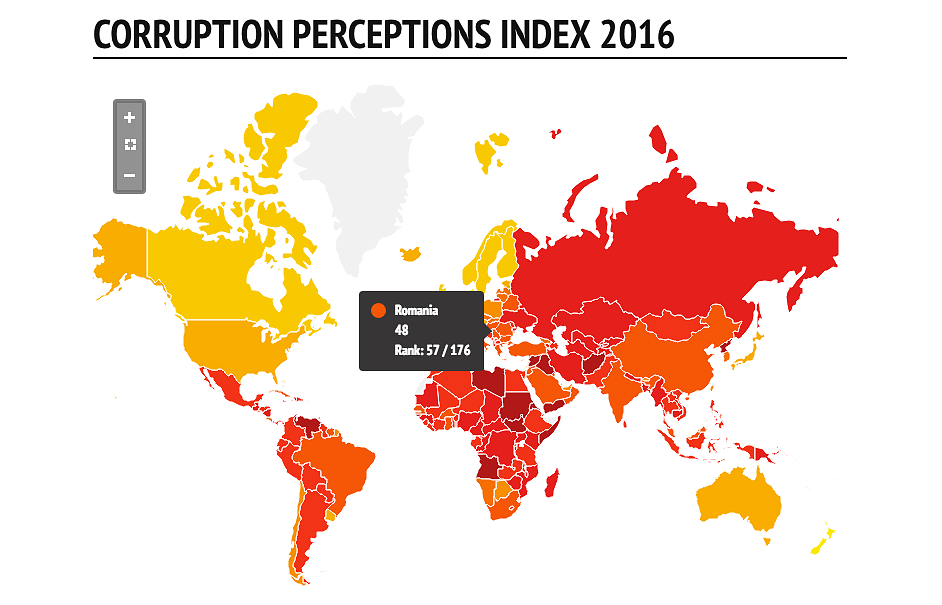 Romania ranks 57th among the 176 countries surveyed in Transparency International’s 2016 Corruption Perceptions Index, up from 58th in the previous ranking, which included 168 countries and territories. This means that the perception on corruption in Romania has slightly improved compared to the previous year.

The Corruption Perception Index scores and ranks countries/territories based on how corrupt a country’s public sector is perceived to be, with the top countries being perceived as the least corrupt and the ones at the bottom seen as the most corrupt. It is a composite index, a combination of surveys and assessments of corruption, collected by a variety of reputable institutions.

Romania’s neighbor Hungary is also at number 57 in the 2016 ranking, and so is Jordan. Bulgaria, however, is seen as a more corrupt country than Romania, ranking 75th, with only 41 points.

Denmark and New Zealand top the ranking, being perceived as the least corrupt countries in the world, with a score of 90 points each, followed by Finland, Sweden, Switzerland, Norway, Singapore, Netherlands, Canada, and Germany. At the other end, North Korea (12 points), South Sudan (11 points), and Somalia (10 points) are at the bottom of the ranking.

The European Commission has acknowledged Romania’s major progresses in reforming its justice system and fighting corruption in the last ten years, but will continue to monitor the process until the changes made in the last few years become irreversible, according to the latest Cooperation and Verification Mechanism (CVM) report, published on January 25, 2017.