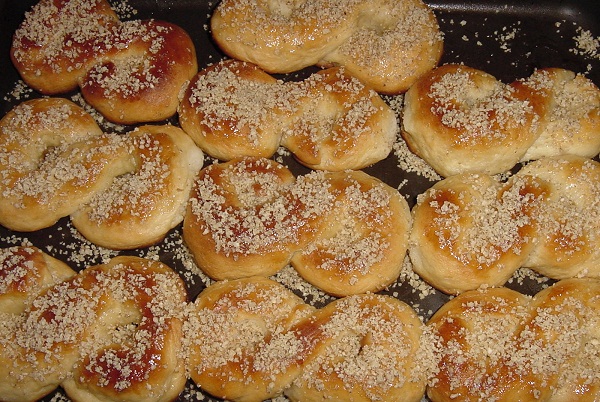 The Orthodox Christians on March 9 hold the feast of the Forty Martyrs (Mucenici), soldiers in the Roman army during the reign of Emperor Licinius (308-324), who were tortured and executed in Sebaste (capital of the Roman province Armenia Minor, nowadays the city of Sivas in Turkey - editor's note), because they refused to apostatize their Christian belief.

The popular commemoration of the martyrs marks the beginning of the agricultural year, celebrated on the vernal equinox, a borderline halfway between winter and summer, between the freezing days of Dochia (mythological figure identified with the return of the spring, believed to be frozen alive) and the milder days of the Mosi (identified with the martyrs, mythological figures believed to counterbalance the cold brought by Dochia).

The customs in the Mucinici day bear specific traits of rites of passage common for New Year: baking "mucenici", traditional sweets resembling a human shape or the eight figure (in picture), the ritual drinking derived from the popular belief claiming that one should drink 40 glasses of wine this day, stoking fires in yards and gardens, purification of both people and animals by sprinkling holy water, beating up the ground with wooden mallets to drive out cold and unleash the warmth.

The custom to drink forty glasses of red wine on this day dates back to old pagan rituals in ancient times. People believe that the wine consumed on this day turns into blood and vigour all the year round. In case someone cannot drink that amount of wine, one should have at least a sip or be spattered with wine.