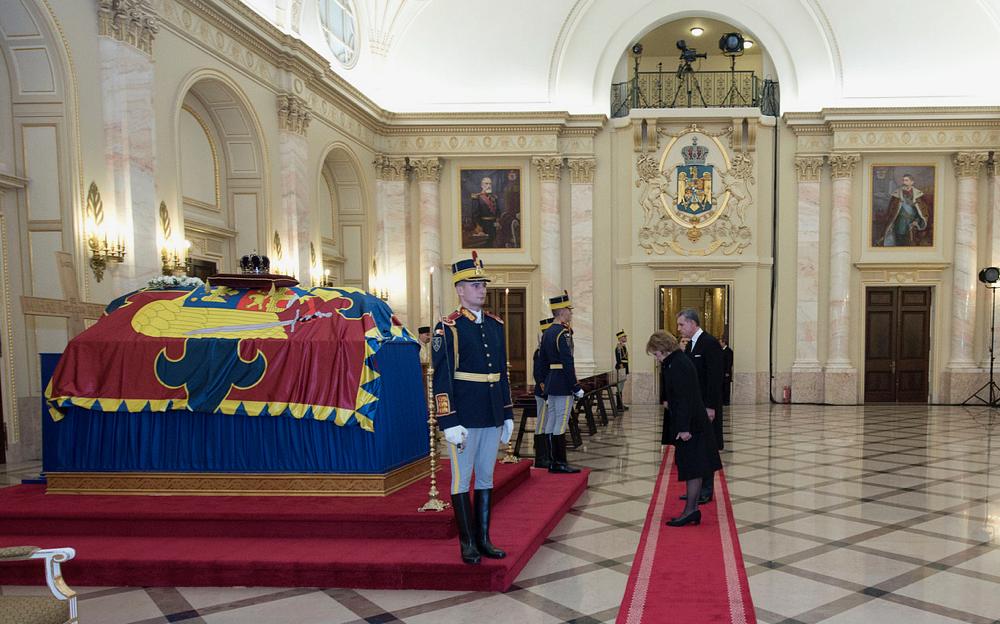 The three national days of mourning after the death of King Michael, who passed away on December 5, begin today, December 14 and continue until Saturday, December 16.

The decision to observe three days of mourning was taken last week by the Government.

Throughout the mourning period, all public institutions will flow Romania’s flag at half-staff. The flag will be flown at half-mast at the headquarters of political parties, unions, educational and cultural institutions, Romania’s diplomatic missions, at border crossing points, in airports, ports, train stations and on the ships sailing under the Romanian flag. At the same time, the national TV stations, radio stations and the cultural institutions will have to adapt their programs accordingly.

The body of King Michael I, Romania’s last sovereign, was brought to Romania on Wednesday, December 13. The former king, who spent almost 70 years of his life away from Romania, will be buried at Curtea de Arges on December 16.

The king’s coffin was brought by plane from Switzerland to the Henri Coanda International Airport in Otopeni, from where it was taken to the Peles Castle in Sinaia.

Upon entering Bucharest during the evening, the car carrying the king’s casket passed beneath the capital’s Arch of Triumph, where it was greeted by hundreds of people. The winter lights were turned off yesterday throughout the route of the funeral suite, and the flags were flown at half-mast.

The casket was taken to the Royal Palace in Bucharest, where it will stay until December 16, the day of the funeral. The Royal Palace, which now hosts Romania’s National Art Museum, is the place where the king took his oath, aged 19, for his second reign. He had previously ruled over Romania from July 1927, when he was only 6, to June 1930, when his father Carol II reclaimed the throne.

Over 1,000 people welcomed the funeral suite upon its arrival at the palace. They applauded and chanted slogans such as “The King and the Country” and “The monarchy will save Romania.” Throughout the day, people came to the palace to lay flowers and wreaths, and light candles.

The late king was evoked on December 13 in the European Parliament (EP), when Antonio Tajani, the president of the EP, spoke of his importance for the history of Romania and of Europe. “I want to recall the fundamental role that he [e.n. King Michael I] had in 1944, when he brought his country to the side of the Allies. With this, we wish to express our condolences to the Romanian people and to the Parliament of Romania for the passing of this important personality, who represents an important part of Romania’s history and of our continent,” he said.

The king’s casket will remain in the Throne’s Hall at the Royal Palace until Saturday. Anyone wishing to pay their last respects to the king can do so there, until Friday, December 15, at 22:00.