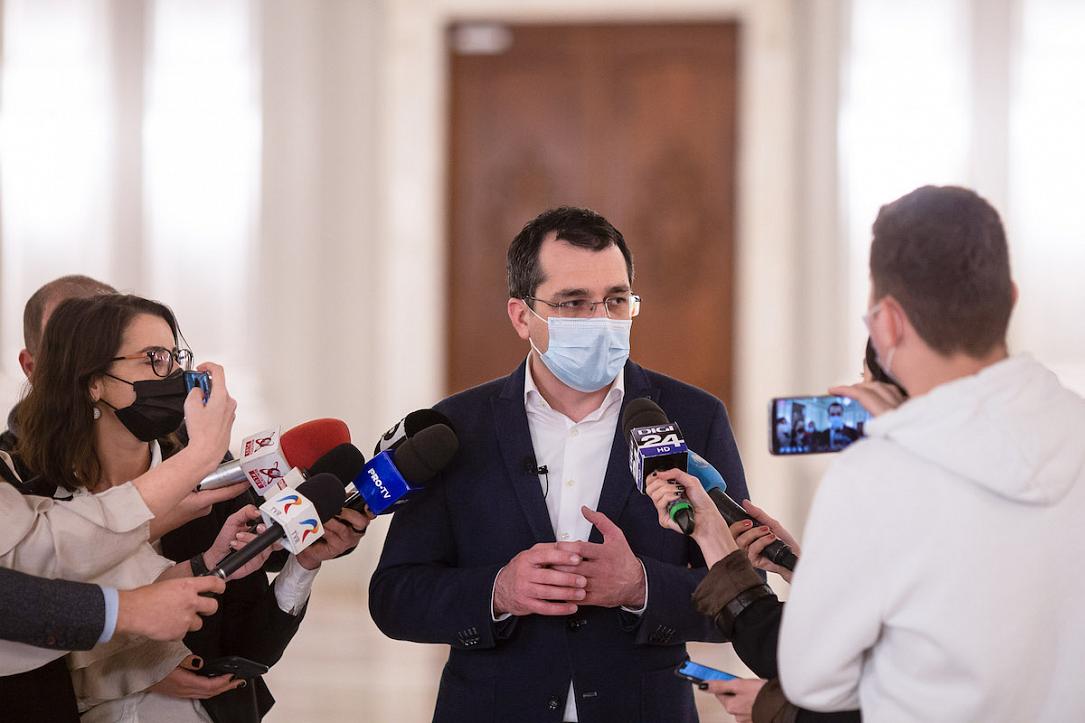 The dispute between dismissed health minister Vlad Voiculescu, a top member of the USR-PLUS alliance, and Liberal prime minister Florin Citu has continued after Voiculescu reported some inconsistencies in the COVID-19 death reporting process in the country.

The conflict started last Friday when Voiculescu said, during a press conference, that "there are fundamental differences" between the reported and actual numbers of COVID-related deaths and urged the PM to continue the investigation he started and review these reports.

Later the same day, Voiculescu tried to explain his statement at local news channel Digi24, saying that he was trying to signal a problem in the reporting methodology, not fuel any conspiracy theories.

"On the one hand, we are talking about a flawed methodology. I can say that for sure. And the result of this methodology is a difference whose amplitude we do not know," the former health minister said, according to G4media.ro.

He explained that he came to this conclusion after finding some differences in the data provided by the two official reporting platforms. Thus, a working group was put together to investigate this situation. However, they didn't manage to complete their investigation as the prime minister decided to dismiss Voiculescu.

"It's a matter of methodology. […] What I think happened, and I have serious clues, is that there has been an underreporting. It does not change reality, but it changes perception. We took a hospital, we looked at the number of deaths, and then we looked at how it is reported on each platform. In both, there is an underreporting, and the difference between the two platforms is significant," Vlad Voiculescu said, adding that the difference may be of "thousands of cases."

However, he also said that "this is not about hidden deaths" and that the reporting methodology should be revised.

In his turn, prime minister Citu said that the working group Voiculescu talked about does not exist.

"Following the information published in the press, I asked Secretary of State Andrei Baciu to tell me if there is a working group at the level of the Ministry of Health that deals with such a thing. Today we have confirmation that this working group does not exist," Citu said, Digi24 reported.

According to the PM, such a working group will be put together in the coming period.

However, things took a new turn when Liviu Iolu, a member of USR-PLUS, shared on Facebook a decision to establish a technical working group within the Ministry of Health tasked with verifying the reporting of SARS-COV-2 infection data. The document, which apparently comes to contradict the prime minister, is dated April 12, 2021, and signed by former Health Secretary of State Andreea Moldovan.

However, the Liberal side claims that, even with this document signed by Andreea Moldovan, the group still does not exist because its establishment was not approved by the ministry's legal department, Digi24 reported. Moreover, on Monday, the Ministry of Health also said in a press release that, at this time, at the level of this institution, there is no legal working group set up to verify the daily reports on the evolution of the COVID-19 pandemic.

Prime minister Citu dismissed both Vlad Voiculescu and Andreea Moldovan on April 14, after a series of communication fails between the Liberal side, including the PM, and Voiculescu. The PM's decision sparked a major scandal with the ruling coalition, as the junior partner USR-PLUS claimed that it was not consulted on this matter.