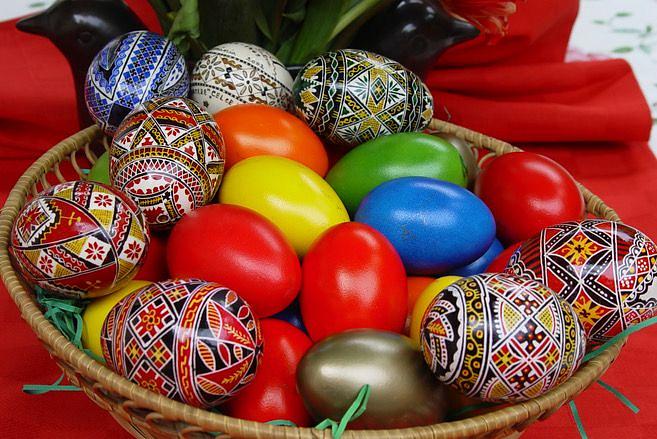 Romanians are among the most religious Europeans, according to several surveys, and for many Easter is the most important Christian holiday of the year. The Resurrection of Jesus is marked by many traditions and customs, and most of them are still practiced today, even in the big cities. And Bucharest is also buzzing during this period.

In Romania, the majority of the population (about 86.5%, according to a 2011 census) is Orthodox, while 4.6% of the inhabitants are Roman Catholic and less than 1% are Greek Catholics. Therefore, most of the country’s inhabitants celebrate the Orthodox Easter, but there are also places of worship that hold religious services on the Catholic Easter Sunday.

Easter is always held on a Sunday, but the exact date differs from year to year, being calculated according to two astronomical phenomena: the spring equinox and the full moon. Thus, the Orthodox and Catholic Easter are celebrated on different dates, usually one week apart. But sometimes the Orthodox and the Catholics celebrate the Resurrection of Jesus on the same day, as it happened in 2017, for example, and how it will happen again in 2025.

When the dates differ, the Catholic Easter is celebrated before the Orthodox Easter. In Bucharest, the religious ceremonies of the Holy Week and the Easter Mass are held in Catholic churches across the city, such as the Saint Joseph Cathedral, the Assumption of the Blessed Virgin Mary Church, Bărăția Church, the St. Helena Roman-Catholic Church, “Sacre Coeur” French Church and the St. Theresa Church.

In Romania, Easter is preceded by a long period of fasting. The Easter fasting, which lasts 40 days, is considered the longest and toughest long-term fasting encountered in the Orthodox Church. The week before Easter is called Săptămâna Patimilor (the Holly Week) and includes several religious holidays such as the Palm Sunday, the Holy Thursday, the Good Friday and the Holy Saturday. The week after Easter Sunday is called Săptămâna Luminată (the Bright Week).

For the Orthodox in Bucharest, the Great Week begins with daily religious services – in fact, this is how it happens all over Romania. These special religious ceremonies, called Denii, take place in the evening. They are held in all the Orthodox churches in Romania. The Patriarchal Cathedral located on Dealul Mitropoliei in Bucharest gets crowded during the Holy Week afternoons: people go up from Unirii Square to the Cathedral, to attend the daily religious services.

Before Easter, the believers go to church on Palm Sunday – which is celebrated on the previous Sunday. In the morning of Palm Sunday, the Patriarchal Cathedral is usually full: people of all ages, Romanians and foreigners, many accompanied by children, attend the service. Around noon, when the service is over, we see on the streets people with blessed willow branches in their hands. When they get home, they put the branches above the doors, at the entrance and at icons, as it is believed that they will protect them and their families.

The most important days of the Holy Week – which is also called the Week of Sufferings (Săptămâna Patimilor) - are Thursday and Friday. The religious services held on the evenings of Thursday and Friday also bring most believers to church. The Patriarchal Cathedral becomes too small: the believers are waiting for the Holy Thursday Denia, when the Holy Cross is taken out of the altar and placed in the middle of the church. In some places, the cross is taken on a short pilgrimage around the church. Usually, the service is officiated by the Orthodox Patriarch - the head of the Orthodox Church in Romania - together with several priests.

The Denia of Good Friday, also called the Denia of the Lord’s Prohod, brings even more believers to church. There are many children and young people at this service, and all the believers sing together the religious liturgical song called Prohod.

The Patriarchal Cathedral gets crowded once again; this time, the people are also waiting outside. The procession also moves outside the church; led by the priests, the believers holding burning candles walk slowly around the Patriarchal Cathedral. They stop from time to time, at the priest's sign, while trying to keep their candles lit. At the end of the procession, the believers enter the church passing under the Holy Epitaph.

If the religious services of the Holy Week bring hundreds of believers to the Patriarchal Cathedral, the Resurrection Mass, which is held on the night of Saturday to Sunday, is attended by thousands of people. All the churches in the city are full on the Resurrection night.

The streets are livelier than ever in the center of Bucharest; people are going to the Resurrection service with candles in their hands. In the church, the priests - at the Cathedral, the Patriarch himself - bring the holy light from the altar to the believers. At the beginning of Mass, the priest, carrying a large bunch of lit candles, passes through the crowd, saying aloud: “Come and take the light!” The believers' approach and the flame pass from one candle to another, until all participants have their candles lit. Then the priest announces: “Christ has resurrected!” The believers attending the service respond: “Indeed, He has resurrected!” Slowly, they share the holy light with others and then they head home, carefully trying to keep the candles lit on the road.

In Romania, the Easter Mass brings more people to churches than any other religious holiday. Most attend only the first part of the Mass, and then take the holy light back home. At midnight, the boulevards and streets of Bucharest are lit by thousands of candles: a magical procession that happens only one night a year. The streets come alive from the small flames of the candles, which create an atmosphere of peacefulness and joy. On their way home, some also share the light with other believers.

Easter comes with many customs and traditions in Romania and some of them are practiced even in the Capital and other big cities. The preparations for the Easter Sunday have to be completed in the Holy Week, when the women get their homes ready for the big holiday and cook traditional dishes.

Lamb meat is the star ingredient of most dishes cooked during this period, and the dish called “drob de miel” (lamb haggis) is almost never missing from the table. “Pasca” (a traditional cheesecake cooked for Easter) and “cozonac” (a sweet bread with cocoa, nuts, raisins, and/or Turkish delight), which are the traditional Easter desserts, are also in the menu.

All these Easter goodies can also be found in the menus of Bucharest restaurants (reinvented or cooked traditionally), so everyone can enjoy traditional Romanian tastes during this period. Some of the venues in the Capital also organize special Easter brunches, but most prepare special menus for lunch or dinner. Although restaurants in the Old Town are the most popular during this period, most venues, even if they are not formally named Romanian restaurants, cook traditional meals for Easter. Tourists can also try “drob de miel” or “pască” at their hotels’ restaurants.

Those planning to spend Easter with a local family should expect a feast. There is a lot of food on the Romanians’ tables on Easter Sunday, so all guests must be prepared to overeat.

However, egg painting is the most popular Easter tradition in Romania. The hard-boiled eggs are usually painted in a single color. Red is the most popular (because it is said to remind of the blood of Christ), but some families choose to paint the eggs in green, blue, yellow or other colors.

Local artisans, however, create true works of art on the small boiled eggs, combining colors with a variety of geometric shapes and traditional motifs. And the Bucharesters and the Capital’s tourists can also learn egg painting techniques or buy eggs already painted at the fairs held in the city around Easter. Such events are usually organized in parks (such as Regele Mihai I – Herăstrău Park), the Museum of the Romanian Peasant or the “Dimitrie Gusti” National Village Museum and even in shopping centers.

On Easter Sunday, but also on the following days, the most fun tradition is the egg tapping. This requires two people, each holding an Easter egg in hand. One of them has to say “Hristos a înviat!” (Christ has resurrected) and the other one has to answer “Adevărat a înviat!” (Indeed, He has resurrected). Only then the two can tap their eggs, and the one who breaks the other person’s egg is the winner and can try to break other eggs in the same way.

In some areas, particularly in cities (including Bucharest), some families also organize Easter egg hunts (with real eggs or chocolate eggs) for the kids. The juniors are having a great time trying to find the eggs hidden in the grass or in certain rooms. Even some venues, hotels or cultural institutions in Bucharest organize such activities for their clients or visitors, while some events organized in parks or other green areas also include egg hunts in their program.

In addition to marking an extremely important religious moment, Easter is a time of peace of mind and joy in Romania, being probably the best time to discover Romanian traditions and customs.

During this period, in the context of the coronavirus pandemic (COVID-19) in 2020, churches in Romania hold religious services without the participation of believers, but some masses are broadcast. In addition, all public events, such as Easter fairs, are banned during the state of emergency. 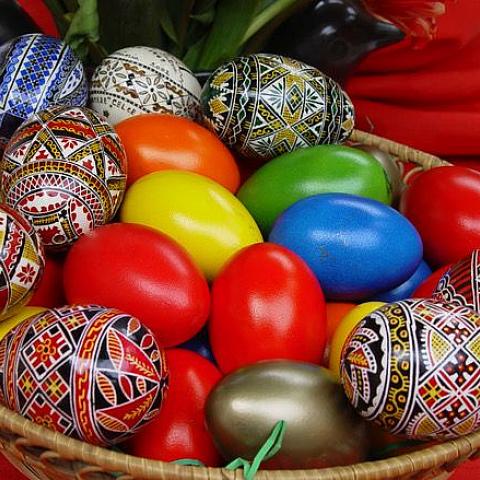 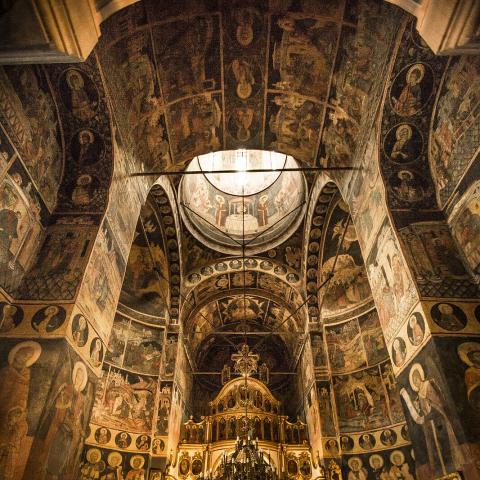 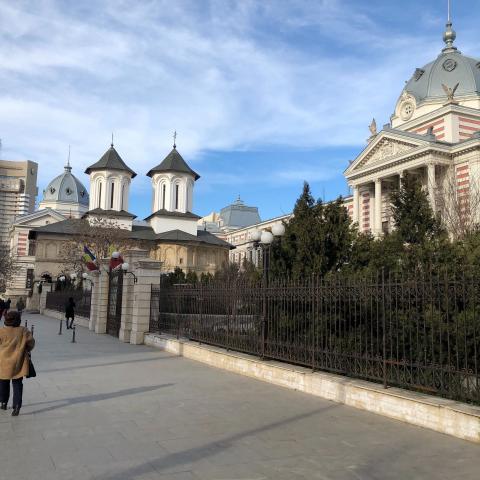 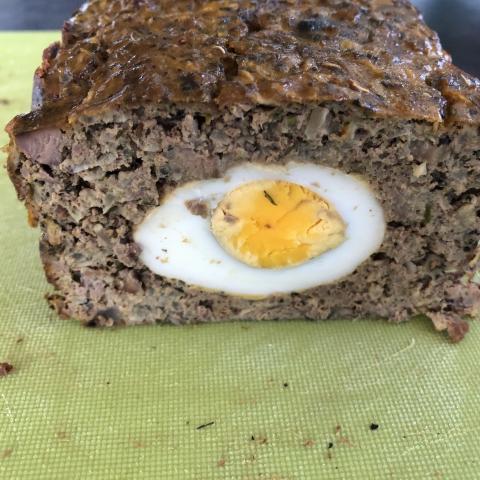 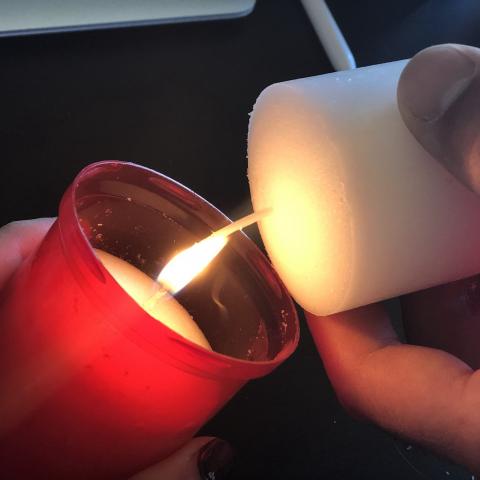 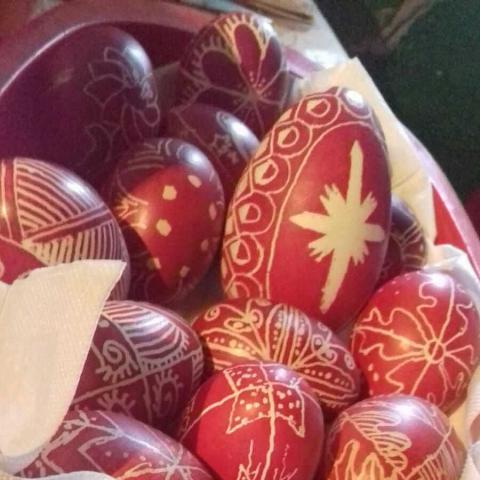