Comment: How the coronavirus has changed the political landscape in Romania 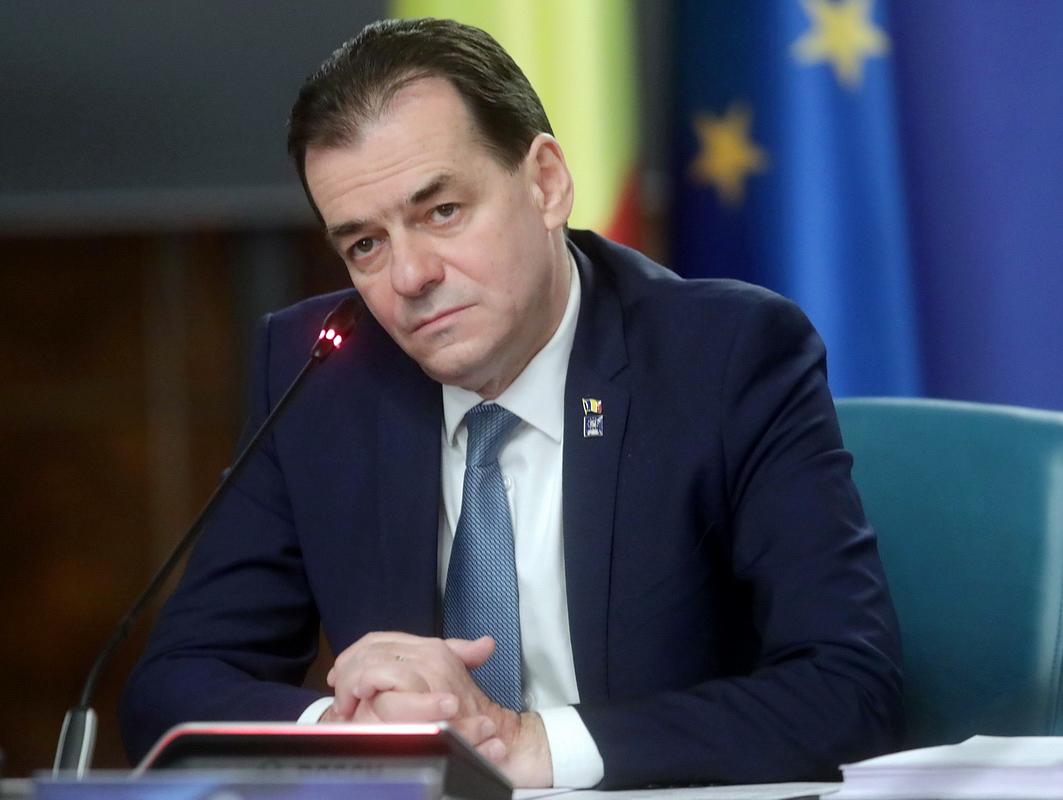 Since the new coronavirus pandemic has taken the spotlight in March, the political battle in Romania has moved in the background. However, despite the apparent calm on the political scene, the developments in the last couple of months have been significant.

At the beginning of the year, the probable winner of the two rounds of elections in Romania this year - local and parliamentary - seemed clear, but the outcome is now more difficult to predict. With the polls pushed towards the end of the year, the evolution of the economy over the summer will most likely decide who will lead Romania in the next four years. Liberal prime minister Ludovic Orban (opening photo) has every reason to be worried. Here is a brief analysis of how the Romanian political scene has changed in the last two months.

After the Liberals came to power in Romania, in November 2019, ousting the Social Democratic Government of Viorica Dancila, and Klaus Iohannis won his second mandate as president, it looked like nothing could stop them from winning the local and parliamentary elections this year. In January, the Liberals had a 47.4% score in an opinion poll conducted by IMAS for Europa FM. Meanwhile, the Social Democrats had little over 20%, and the alliance of Save Romania Union (USR) and PLUS had a score of about 16%, according to the same poll. At that time, the discussion was not whether the Liberals would win the elections but if they would manage to get a majority alone so that they could govern even without a coalition partner.

Encouraged by this perspective and aware that governing in an election year would only erode their score, the Liberals and president Klaus Iohannis tried to force snap elections. They pushed the Social Democrats to file a no-confidence motion, which was adopted in early February, and prime minister Ludovic Orban was dismissed. Then, president Iohannis nominated Orban to form another cabinet. The president and the Liberals were hoping that the Parliament would reject two cabinets, which would have opened the way for early elections.

However, the Constitutional Court intervened and ruled that the president couldn’t nominate a prime minister just to have him rejected by the Parliament. According to the Constitutional Court, the appointed prime minister had to try and form a majority in the Parliament. As the COVID-19 epidemic hit Italy, Romanian politicians were caught in their games. The president nominated finance minister Florin Citu to form a new cabinet. If there was someone the Social Democrats hated more than Orban, it was Citu, so there was no chance he would get the confidence vote.

Then, the first coronavirus case was reported in Romania, and that changed everything. It became clear that the country needed a stable Government to manage the emergency. All of a sudden, the opposition was willing to vote for the Citu cabinet. But Liberal leader Ludovic Orban could not accept losing the PM seat. Thus, Citu withdrew just hours before the vote in the Parliament. President Iohannis appointed Ludovic Orban as prime minister, and his cabinet (exactly the same team that had been voted out by the PSD in early February) was instated again with full powers. Ironically, the new Orban cabinet was voted by the PSD as many Liberal MPs were under quarantine due to COVID-19.

Obviously, the Social Democrats’ change of heart was based on a very simple logic: a Government that manages a crisis situation is bound to make mistakes and lose political capital.

The new cabinet of Ludovic Orban was sworn in on March 14. Two days later, on March 16, president Klaus Iohannis decreed the state of emergency due to the COVID-19 pandemic giving the Government more powers to manage the crisis. Civil liberties were restricted to ensure social distancing and prevent a rapid spreading of the virus, which would have overwhelmed the poorly organized hospitals in the country.

At first, most people supported the authorities’ decisions. However, the situation soon became more complex and difficult to manage. With movement restrictions for the population and suspended activity in some economic sectors, companies immediately started to suffer. About one million employees were sent into technical unemployment, and thousands others lost their jobs altogether. The Government had to come up with solutions to these problems. Other European countries in the same situation were announcing unprecedented support measures to help their ailing economies. With little fiscal space at its disposal, Romania’s Government couldn’t come up with solutions for everyone. Some of its support measures were difficult to implement. People started to feel disappointed.

Meanwhile, the Social Democrats started to come up with enhanced support measures passing them through the Parliament with no consideration on their impact, just to make the Government’s job more difficult, some would argue.

Aware of the difficult moment for the country and for his party as well, president Klaus Iohannis got actively involved in executive decisions and in announcing them to the population. During the state of emergency, he made more public statements than during his first four years as president appearing as the de-facto leader of the Government. He also used every opportunity to criticize the Social Democrats for opposing the Government’s measures.

However, if the Government seemed somehow in control of the situation during the first month of the state of emergency, until just before Easter, the population’s confidence quickly vanished in the month that followed. It all started with a series of communication mistakes. For example, just before Easter, the president was urging the population to continue following the restrictions while the interior minister was signing a protocol worth the Orthodox Church to relax some of the restrictions during the Easter holidays.

Then, immediately after Easter, the president changed the tone of his communication and started to talk about the relaxation of measures, although the deadline for lifting the state of emergency was weeks away.

Afterwards the president and the Government decided to keep schools closed until the end of the school year and continue the courses online. However, the education minister admitted that about 250,000 students in Romania had no access to the internet and technology, and thus couldn’t benefit from online education.

As the state of emergency got nearer to its end, the Government’s communication errors started to multiply. Each day, officials would come up with new, sometimes contradictory statements on the relaxation measures to be implemented after May 15.

The Government took another blow on May 6 when the Constitutional Court ruled that the record fines the authorities issued for those who didn’t respect the anti-COVID restrictions were unconstitutional. Another error of the Government led to three days without restrictions after the state of emergency was lifted on May 16 until the new restrictions were enforced. During this weekend, a small protest took place in Bucharest’s Victoriei Square and a party in Herastrau Park.

The political cost has been significant. After two months under the state of emergency, the Liberals have taken a dive in the polls. According to the IMAS barometer, PNL’s score fell to 33% in April (from 47% in January), while PSD’s score went up to 24.8% (from 20.6%). PRO Romania, the party of former PM Victor Ponta, and ALDE, the party of former PM Calin Popescu-Tariceanu, which have formed an ad-hoc coalition with PSD in recent months, also went up in the polls. PRO Romania reached 8.2% in April, from under 4% in January. Thus, PSD and PRO Romania together now have roughly the same score as PNL.

Meanwhile, the Save Romania Union (USR) and PLUS have maintained a combined score of around 16% throughout this period. USR, which initially supported the Orban cabinet in November 2019, has recently started behaving more like an opposition party, which could make a future coalition with the Liberals more problematic. The Hungarian Democratic Union (UDMR), one of the swing parties in the Parliament, also has a tense relationship with the Liberals, especially after the recent dispute related to the tacit adoption by the Chamber of Deputies of a draft bill on the autonomy of Szlekerland, a region in central Romania mainly inhabited by Hungarian ethnics. The Senate immediately rejected the bill, but not before president Klaus Iohannis, and the Liberals accused a deal between PSD and the Hungarians.

A more recent poll released by CURS on May 17, shows the Liberals at 32% in the intended vote, down from 38% in January and February. Meanwhile, PSD has a score of 29%, up from 27% in January-February, according to CURS. The same poll shows USR-PLUS at 13% and PRO Romania at 6%.

However, the elections are months away, and the base scenario is that things will continue on the same path, with the Liberal Government continuing to lose its electoral base and the Social Democrats together with their more vocal opposition partners gaining ground. The local administration elections, initially scheduled for June, were pushed to September-October while the parliamentary elections could take place in December. Plenty of time for the Liberals to fall behind, who have some tough calls ahead of them.

One of the most important is the pension hike in September. A law voted by the Parliament last year provides that all state pensions should increase by 40% starting September 1. However, international financial institutions, the Fiscal Council, Romania’s National Bank, and independent analysts were warning even before the coronavirus crisis that such an increase would lead to major fiscal and economic imbalances.

The one thing that could save the Liberals is a swift economic recovery in the third quarter (the famous V-shaped recovery).

Meanwhile, all the opposition has to do is wait. PSD leader Marcel Ciolacu recently voiced the possibility of a no-confidence motion against the Government after the state of alert will end (probably in mid-July). However, it’s unlikely that the opposition will really pursue this scenario as coming to power now seems just about as risky as trying to catch a falling knife.

At the moment, it seems that the biggest winner of the coronavirus crisis in Romania is once again the Social Democratic Party (PSD), a party that appeared to be on the brink of collapse just six months ago, which has once again has been lucky enough to be on the right side of power at the right time.