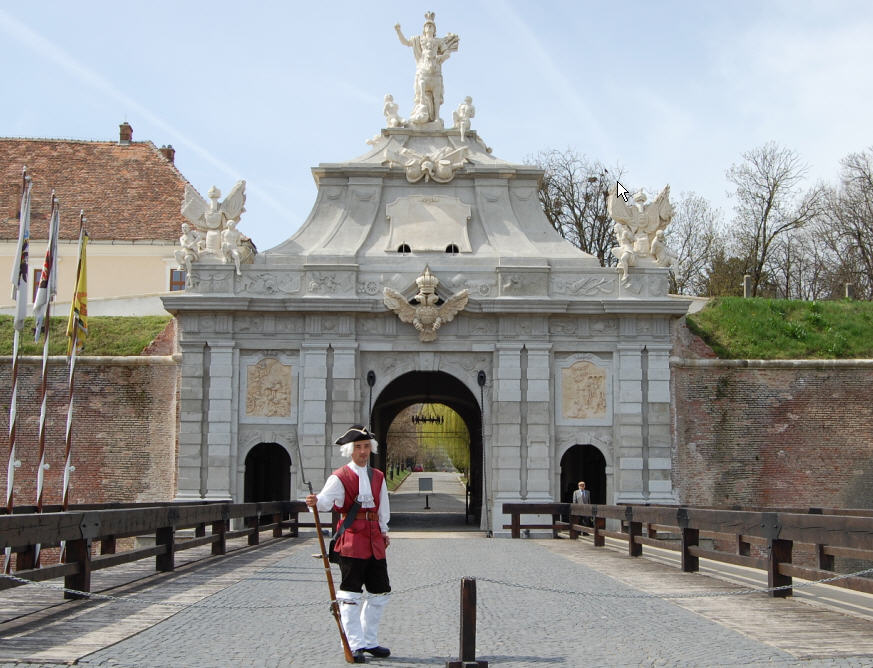 As Romania has recently celebrated its National Day (December 1st, that is), we've chosen Alba Iulia as the destination city of this week, for its historical meaning.

Some 380 km away from Bucharest, but just 100 km from Cluj Napoca, Alba Iulia can be easily reached by car or train. The city is also known as Weissenburg to Germans and as Gyulafehérvár to Hungarians.  Located on River Mures, the city is of great historical importance, as this is the place where the Unification of the Romanian Principalities was proclaimed in 1918.

Alba Iulia is located near the site of Apulon, the Dacian fortifications on top of Piatra Craivii. So the history of this city goes even further in the past. When the southern part of Dacia became a part of the Roman Empire, the capital of Dacia Apulensis was established here. The city was then known as Apulum and was one of the largest centers in Roman Dacia.

The city’s fortress was designed by the Italian architect Morando Visconti, who used the Vauban system, which is the largest of this kind in the South - Eastern Europe. The fortress has seven bastions which give it a stellar shape and makes it unique in the European military architecture.

Inside the fortress one can find the Roman Catholic Cathedral, built in the 13th century. It combines Gothic and Roman style elements and it houses the tomb of Johann Hunyadi next to his elder son Ladislau. The Hungarian Queen Isabella rests here along with her son, Ioan Sigismund.

The Bathyaneum library was at its origins actually a church built in Baroque style. Later on in 1780, it was transformed by Ignác Batthyány, the bishop of Transylvania, into the present library. The Bathyaneum library is famous all over the world for its large collection of manuscripts and rare books.

The Apor Palace stands nearby. Built in the second half of the 17th century, it used to belong to Prince Apor. At the beginning of 18th century, it hosted the residence of the Austrian army leader Prince Steinville. The palace was renovated in 2007.

The second famous building of the sort in Alba Iulia is the Princely Palace - Palatul Principilor, the former residence of Michael the Brave, during the first political unification of the Romanians in 1600s. It was said to be an extremely luxurious building, richly adorned with frescos and marble stairs but sadly it has been destroyed during the Ottoman and Tatar invasions. Since that time, the Palace went through some restoration stages and modifications but it never went back to its previous condition. The statue of Michael the Brave still stands in front of the palace.

The Reunification Cathedral was built between 1921 and 1923. The cathedral is famous for the event which took place on October 15, 1922, namely, the coronation of the first monarchs of unified Romania, King Ferdinand I and Queen Marie.

The National Museum of Unification was built between 1851 and 1853, originally for military purposes. In 1968 it became a museum. Housing over 130,000 artifacts, it occupies two important buildings in the middle of the City: the Babilon Building and the Unification Hall Building.

On two floors and with more than a hundred rooms, the museum covers many historic periods and events. The Unification Hall was in the beginning a Military Casino of the Garrison. On December 1, 1918 it hosted the 1,228 Romanian delegates which came from all over Transylvania to decide the Unification of the Romanian Principalities.

The city also hosts three fortifications from different periods. The Roman Camp, the oldest, since 106 AD, the Medieval Fortress from the 16th- 17th centuries and the Vauban Fortification, from the beginning of 18th century. A tourist route connecting the Three Fortifications has been initiated by the City Hall of Alba Iulia in association with The United Nations Development Programme through “Beautiful Romania”.