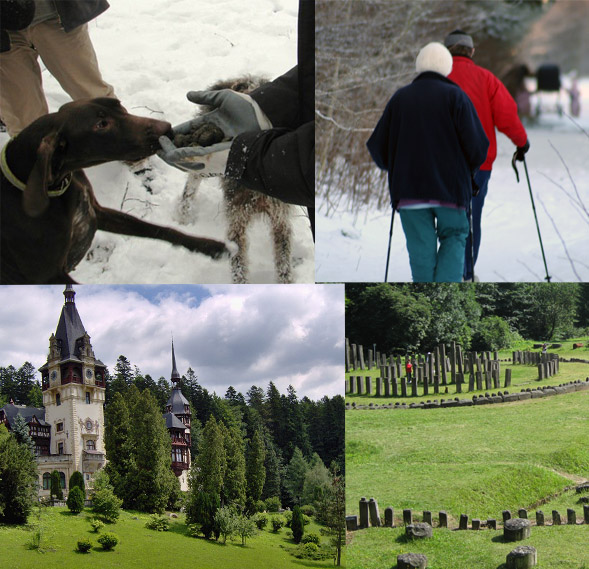 The Buzau county, a bit more than 100 kilometers north of capital Bucharest, is one of the up and coming touristic areas of Romania. There are plenty of things to see and do there, especially if you fancy a more adventurous holiday. You can visit Sarata Monteoru resort, the Muddy Volcanoes, the Endless Fire in Lopatari or the rupestral settlements in Colti or Alunis.

One of the new options in the area however is truffle hunting. The Association Monteoru Renaissance organizes trips to the area which include a truffle hunting session. Few know Buzau is located at the same latitude as Piedmont in Italy, which makes it ideal for truffle hunting. Truffles can be found in Buzau forests (Berca – Gura Teghii) between June and January.

The package offered by the Association Monteoru Renaissance includes a one-day truffle hunting adventure or a week-end adventure. Either way, a chef will also be there to initiate travelers into the truffle-based courses.

Make sure to check back our Travel Planner section for articles about what to do and what to see in Buzau, written by our contributor Thorsten Kirschner. More about Buzau here.

There's more to Sinaia than just the winter time popular resort where everybody rushes on Fridays. The Redescopera Sinaia association has started to promote the mountain city as an all-year round week-end destination and has come up with themed week-end getaways to Sinaia, including various activities in the mountain city.

Unmatched in history, the former summer residence of the Royal Family has the largest number of monuments per capita and it is a must-see for those living in Romania.  Needless to say, Sinaia is a very beautiful city, full of history, architecture and jaw-dropping landscapes, but, as communism left its marks over the city, sometimes its architectural treasures are hidden behind massive hotels or blocks of flats. We recommend you taking an organized tour of Sinaia to make sure you see the real stuff.

More about Sinaia here. For themed week-ends in Sinaia, get in touch with Redescopera Sinaia at [email protected]

Gorj county, south western of Romania, has plenty of places for your to discover. The Jiu river gorge is one of the breathtaking gorges in the Carpathian mountains. And it is not the only amazing view in the area. Oltetului and Soholodului gorges are equally interesting to see.

You shouldn't miss the Muierilor Cave (Women's Cave) in Baia de Fier locality. Pahomie Cave is another must see in the area, in Polovragi locality. While there, take a trip at the monasteries in Gorj. Polovragi and Tismana are not to miss.

Don't forget about the fact that Gorj is the birth place of Romanian sculptor Constantin Brancusi. East of Targu Jiu – the capital city of Gorj county- you will see the Endless Column, the Table of Silence and the Gate of Kiss, all famous sculpture made by Brancusi.

The Mangalia Stud Farm is one of the few remaining stud farms in Romania still in a good shape and ready to entertain tourists. It is also the biggest in South Eastern Europe. It hosts over 300 full-bred horses. The stud farm was opened in 1929 and spreads over 580 hectares near Mangalia, in Constanta county, South East of Romania. The race track spreads over 19 hectares. During the summer, races are held every week. The full-bred Arabian horses are trained every day and you'll be in for a show if  you catch the beach horse training, which takes place on the beach between Saturn and Venus seaside resorts.

The relics of the former Dacian capital and the former capital of Roman Dacia are located in Hunedoara county, in Gradiste locality. It's not one of the most promoted touristic destinations in Romania, but those who happen to be in the area will stop to visit.  At 1,200 meters high in the Orastie mountains, Sarmizegetusa was the core of the six-citadel fortress, the Dacian's main defense system. It also had a sacred area, where the famous Circular Calendar Sanctuary is included. Before you get there, research about Sarmizegetusa a bit, if you're interested, because the tourist information facilities there are quite scarce.

This is a place close to Bucharest, yet less chosen as a tourist destination. It has recently been included in a revamping program funded by EU money. The project aims at upgrading the infrastructure of the Fortified Monastery of Comana, hoping to attract more tourists to the area, and it will take three years to complete.

It was Vlad Tepes (Prince of Wallachia during 1431-1476, more commonly known as Vlad the Impaler) who had the Comana Monastery built in 1461, on an islet surrounded by swamps and the access way to it ran across a wooden bridge that used to be set on fire in times of peril.

Check out our article on biking to the lake dwellings in the Comana forest here.