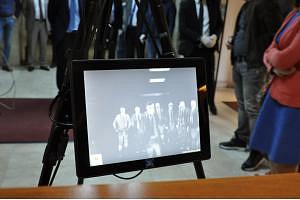 Romanian companies Pro-Optica and Întreprinderea Optică Română - IOR have partnered to develop and manufacture a thermal scanner that allows the precise and rapid examination of inflows of people and warns when body temperatures exceed the normal parameters.

The scanner, called Condor SR-FD, can be used in areas with a high influx of people, such as airports, the subway, border crossing points, triage points of hospitals, or in public institutions, to reduce the time taken up by the fever assessment.

The scanner was developed by privately-owned Pro-Optica, which developed out of the former state-owned optical system company, established in 1936. It was launched into production by IOR, a company in the portfolio of the Economy Ministry.

“I salute the involvement of the national defense industry in the efforts needed to prevent and combat Covid-19. We have already seen that Romanian isolation stretchers can be made, and Romarm will soon start manufacturing masks. Now, two other companies in the national defense industry […] have partnered to produce a thermal scanner,” economy minister Virgil Popescu said.