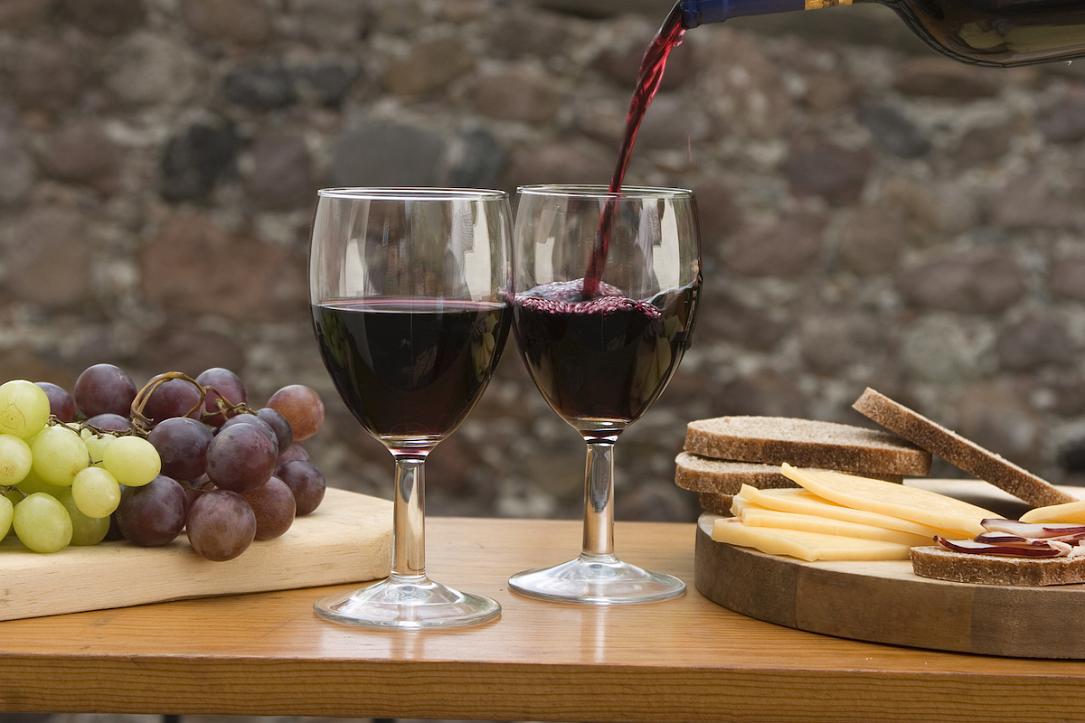 Romania, one of the biggest producers of wine in Europe and the world, has insignificant wine exports while also being a net wine importer. Romania-Insider.com has looked over the statistics and the findings are not impressive.

Romania’s wine production in 2018 reached a record level of 5.1 million hectoliters, which placed it sixth in EU and 13th in the world, according to data from the International Organization of Vine and Wine (OIV).

Meanwhile, Romania exported only 180,000 hectoliters of wine in 2018, ranking 17th in the European Union for wine exports, behind countries with a much smaller wine industry such as Denmark, Austria, Slovakia, and neighboring Bulgaria, Romania-Insider.com has calculated based on Eurostat data.

Romania is not only underperforming as a wine exporter but has been a net wine importer in recent years. In 2018, the country’s wine imports totaled 347,000 hectoliters, being almost double compared to the exports. Of the EU’s top 10 wine producers, only Germany and Austria are also net importers.

Biggest wine producers in EU and their exports: 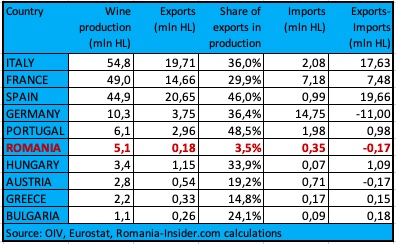 In money terms, Romania’s wine exports totaled EUR 30 million in 2018, even less than those of Sweden (EUR 31 million), which has no tradition in the wine sector. Romania thus ranks only 18th in EU by the value of its wine exports.

The ranking of the biggest wine exporters in EU surprisingly has two small countries – Latvia and Lithuania – in the top 10. However, this is mostly because of wine re-exports, as their high exports are also doubled by high import levels.

On average, Romania exports cheaper wines than most of the top EU producers, expect for Spain. The average price of a liter of wine exported from Romania is EUR 1.69, Romania-Insider.com has calculated based on Eurostat data. France exports the most expensive wines (EUR 6.37 per liter), followed by Italy (EUR 3.16), Germany (EUR 2.78) and Portugal (EUR 2.7). Meanwhile, the average price of wine exported by Spain is only EUR 1.44.

Romania’s wines are also more expensive than those of its neighbors. Thus, Bulgaria sells its wines abroad with EUR 1.18 per liter and Hungary – with under EUR 1 per liter. 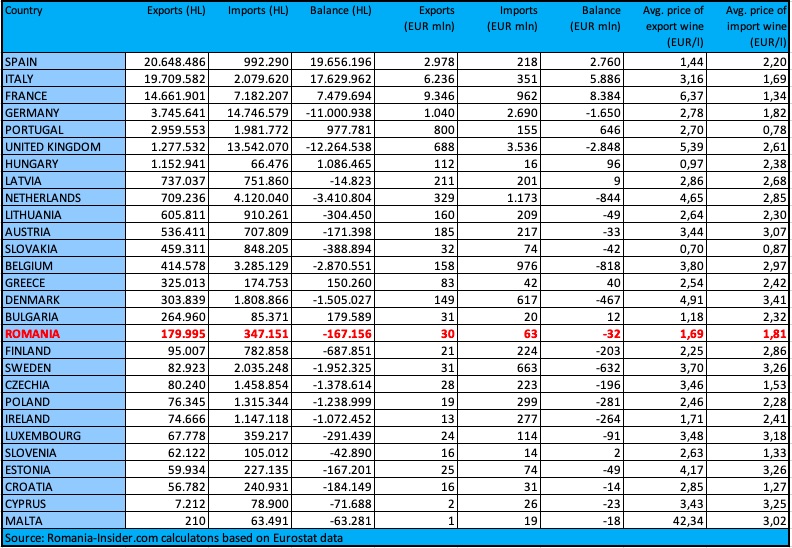 Worldwide, Romania ranks 11th for the area under vines, with 191,000 hectares, and 13th for the wine production, according to OIV data. However, it is only 35th by the value of wine exports, behind countries such as Georgia and Moldova according to worldstopexports.com. Moldova and Georgia produce about 2 million of hectoliters of wine each, but their wine exports are about five times higher than Romania’s.

However, Romania is 14th in the world for wine consumption. In 2017, Romanians drank about 4.1 million hectoliters of wine, according to OIV data.